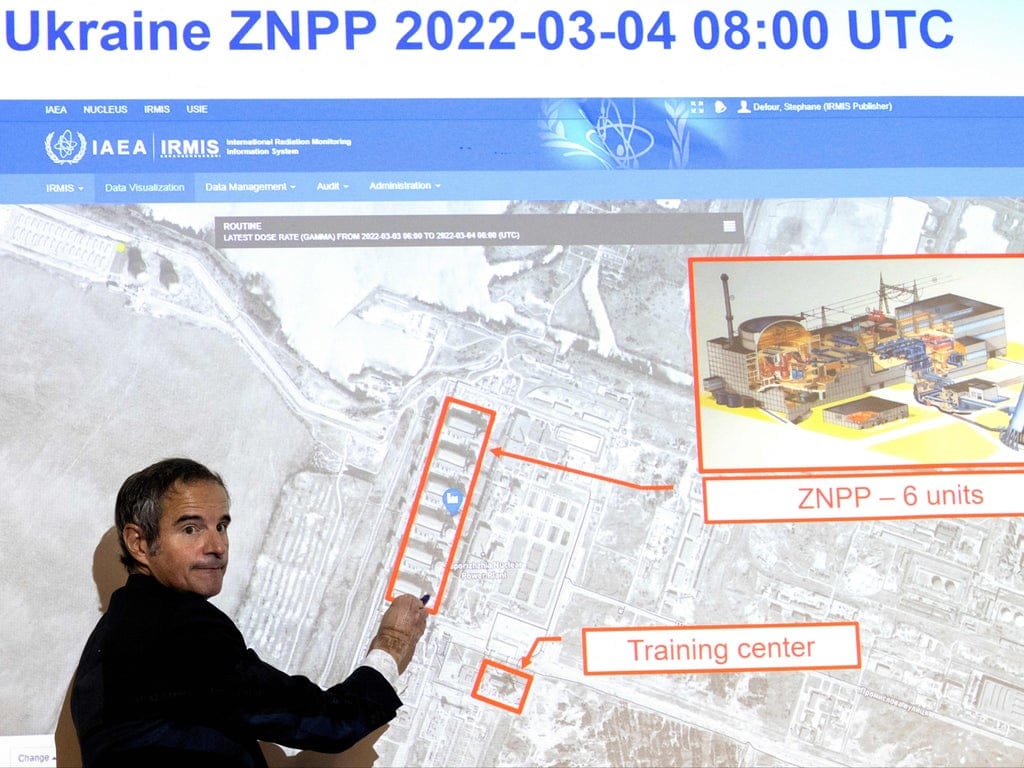 There is “no real” or immediate risk posed by the Ukrainian nuclear power plant attacked and captured by Russian forces on Friday, scientists have said.

Six out of five reactors at the Zaporizhzhia nuclear plant — Europe’s largest — have been shut down, and radiation levels around the site remain normal, according to the United Nations’ atomic agency.

Firefighters were forced to extinguish a blaze at the site following the attack by Russian forces, which has evoked memories of the world’s worst nuclear disaster, at Chernobyl — 300 miles away in northern Ukraine.

Nuclear plant spokesman Andriy Tuz told Ukrainian television overnight that shells fell directly on the facility, and set fire to reactor No 1, which is under renovation and not operating, and to an administrative training building.

On Friday morning, officials only referenced a blaze at the training building when they said that all fires at the plant were out — which the International Atomic Energy Agency also confirmed.

The regional military administration reported unspecified damage to the compartment of reactor No 1, but said it does not affect the safety of the power unit.

Although Ukraine president Volodymyr Zelensky warned that the attack could mark “the end of Europe,” scientists have sought to offer assurances over the current state of the Zaporizhzhia nuclear power plant.

“As such the essential reactor components are housed inside a heavily steel reinforced concrete containment building that can withstand extreme external events, both natural and man-made, such as an aircraft crash or explosions,” he explained.

“The reactor core is itself further housed in a sealed steel pressure vessel with 20 cm thick walls. The design is a lot different to the Chernobyl reactor, which did not have a containment building, and hence there is no real risk, in my opinion, at the plant now the reactors have been safely shut down.”

Tom Scott, a professor in materials at the University of Bristol, also agreed that the site’s safety design meant the reactors “are naturally quite resilient to any external disturbances and hence I am not overly concerned that inadvertent damage could cause a major nuclear incident”.

The Zaporizhzhia regional military administration said that measurements taken at 5am on Friday showed radiation levels in the region “remain unchanged and do not endanger the lives and health of the population.” Nuclear officials across Europe also said no radiation spikes have been reported.

Even though the plant is of a different design than Chernobyl and is protected from fire, nuclear safety experts and the International Atomic Energy Agency (IAEA) have warned that waging war in and around such facilities presents extreme risks.

One major concern, raised by Ukraine’s state nuclear regulator, is that if fighting interrupts power supply to the nuclear plant, it would be forced to use less-reliable diesel generators to provide emergency power to operating cooling systems.

A failure of those systems could lead to a disaster similar to that of Japan’s Fukushima plant, when a massive earthquake and tsunami in 2011 destroyed cooling systems, triggering meltdowns in three reactors.

Robin Grimes, a professor of materials physics at Imperial College London, said it was “staggering and reckless to the extreme that shells have been fired close to a nuclear plant, let alone targeting buildings within the plant.”

He added: “Even if they were not aiming for the nuclear plant, artillery is notoriously inaccurate in a time of war.

“Fortunately, it is clear from IAEA measurements and from others that radiation levels in and around the plant have not risen. We can therefore assume that for the time being the core remains intact.”

In response to the attack, British Prime Minister Boris Johnson called for an emergency meeting of the UN Security Council to raise the issue of the shelling.