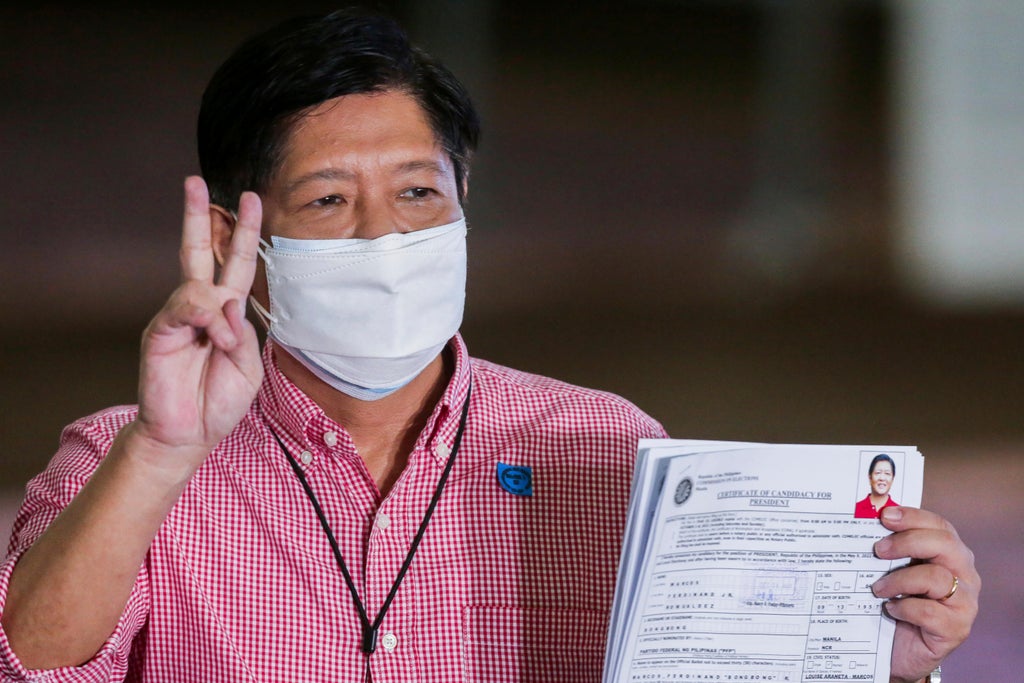 Campaigning in the Philippines’ presidential election started Tuesday with a cast of candidates led by a late dictator’s son and the pro-democracy current vice president, with all vowing to bail out a country driven deeper into poverty by the pandemic and plagued by gaping inequalities and decades-long insurgencies.

The official three-month election campaign for national posts, including the president and separately elected vice president and half of the 24-seat Senate opened under tough anti-virus restrictions including a ban on handshakes, kissing, hugging and tightly packed crowds aimed at dampening the carnival-like rallies that have been the hallmark of Philippine elections. Social media has become a key battleground in the May 9 elections given the restrictions with many fearing disinformation could worsen in an intense race.

Candidates for more than 18,000 local positions, including provincial governors, town mayors and House of Representatives seats open their campaigns on March 25 under tight police watch due to a history of violent rivalries. More than 67 million Filipinos have registered to cast their votes, including nearly 1.7 million who work abroad.

Ferdinand “Bongbong” Marcos Jr., the son and namesake of the dictator who was overthrown in a 1986 army-backed “people power” uprising, has topped pre-election surveys by a wide margin, alarming proponents of human rights and democracy, including Vice President Leni Robredo

Robredo narrowly defeated Marcos Jr. in the 2016 vice presidential race but is trailing far behind him in recent polls for the presidential race, despite human rights atrocities and corruption during his father’s rule that he has described as “lies.”

The other main presidential contenders include Manila Mayor Isko Moreno, a former actor who has impressed many with his rags-to-power life story and cleanup of the capital, Sen. Panfilo Lacson, a former national police chief known for his exploits against crime and corruption, and Sen. Manny Pacquiao the former boxing star who has vowed to jail corrupt politicians and provide free houses to the poor.

More than three decades after the downfall of the elder Marcos, his family has tapped into the disenchantment of many Filipinos “against the inherent contradictions and deficiencies of the elite democracy that replaced the Marcos dictatorship,” Manila-based political analyst Richard Heydarian said, adding that “pro-Marcos propaganda has really swarmed mass media.”

“What we’re witnessing now, especially with the massive surge that Ferdinand Marcos Jr. is enjoying, is nothing short of a counter revolution,” Heydarian said.

Marcos died in 1989 while in exile in Hawaii without admitting any wrongdoing, including accusations that he, his family and cronies amassed an estimated $5 billion to $10 billion while he was in power. A Hawaii court later found him liable for human rights violations and awarded $2 billion from his estate to compensate more than 9,000 Filipinos who filed a lawsuit against him for torture, incarceration, extrajudicial killings and disappearances.

His widow, Imelda Marcos, and their children were allowed to return to the Philippines in 1991. They have since made a stunning political comeback, winning seats in Congress and powerful provincial posts that have brought them closer to the presidency.

Marcos Jr., 64, has served as vice governor and governor of northern Ilocos Norte province, congressman and senator. A sister, Imee Marcos, is currently a senator.

Despite Marcos Jr.’s lead in opinion polls, analysts say it’s too early to predict the election outcome given often-unpredictable shifts in the volatile Philippine politics. “The surveys are just a snapshot,” said Jean Franco, a professor at the University of the Philippines.

A number of petitions seeking to disqualify Marcos Jr.’s candidacy, mostly filed by left-wing activists, remain pending in the Commission on Elections, with most citing his 1995 tax conviction and alleged falsehoods in his candidacy papers. One petition has been dismissed.

A pending petition argues his tax conviction was an offense that involved “moral turpitude,” which would bar a candidate from holding public office. Former commissioner Rowena Guanzon disclosed last month that she voted to disqualify him in the case, but her retirement last week invalidated her vote.

Marcos Jr. has joined hands with Davao city Mayor Sara Duterte, the outgoing president’s daughter, as his vice-presidential running mate. President Rodrigo Duterte backs his daughter’s run from her but opposes her pairing with Marcos Jr. and has vowed to never support him.

Human rights activists have said the 76-year-old Duterte would do everything to ensure a friendly successor to help him face potential lawsuits when he steps down on June 30 over his bloody anti-drugs crackdown, which has left more than 6,000 mostly petty suspects dead.

While his daughter has opted to seek the vice presidency, emerging as a leading contender, there has been speculation she could still end up in the top post if she and Marcos Jr. win and he eventually gets disqualified if the Supreme Court upholds any of the pending petitions against him.