Early access to Nissan’s first electric car since the Leaf gives first impressions of its performance, comfort and spec, with promises of up to 310 miles of range

The Leaf was the world’s first practical mainstream EV back in 2010 and even by the time the second generation came around in 2017, few volume manufacturers were building anything similar.

It seems strange, then, that since that second-generation Leaf, the Japanese brand has been pretty quiet on the electric front while rivals have raced ahead, launching multiple models in recent years.

Nissan hasn’t been ignoring electrification but it just hasn’t been pursuing it in the same way as other brands, claiming that it “dares to do what others won’t”. Make of that what you will…

Under its Ambition 2030 strategy, the brand is pursuing a two-pronged approach to electrification. It is investing in a new EV battery plant in Sunderland, developing new all-electric models and exploring solid state batteries with a view to bringing them to market by 2028. However, at the same time, it is continuing to explore hybridisation alongside all- electric options, with no announcement on when it might go all-EV.

That’s why there are hybrid versions of the Qashqai and Juke on the way as well as the Ariya electric SUV and Townstar electric van.

The Juke is a fairly standard full hybrid affair which brings more power and lower emissions while the Qashqai e-Power is a unique approach, driven by an electric motor that draws its power from a petrol engine/generator that isn’t connected to the wheels .

The Townstar (a rebadged Renault Kangoo) is a replacement for the e-NV200 and will offer a city-friendly delivery van with an 800kg load capacity and a range of up to 186 miles.

Then there’s the Ariya, Nissan’s first pure EV since the Leaf and e-NV200, and a very big deal indeed.

Built on the CMF platform shared with the Renault Megane E-Tech electric, the Ariya is a mid-sized SUV – somewhere between the Qashqai and X-Trail – that promises refinement, strong performance and up to 310 miles of range.

At launch, four versions will be on offer, starting with the 214bhp two-wheel-drive Advance model, which features a 63kWh battery, good for 250 miles of range. Above that, the Evolve keeps a rear-drive setup but with a 239bhp motor and 87kWh battery – this is the maximum range model, with an expected 310 miles. The e-4orce Evolve adds a second motor to the front axle for 302bhp while the range topping E-4orce Performance uses the same 87kWh battery but with a 387bhp maximum output. Standard E-4orce cars are expected to manage 286 miles on a charge while no figures have been shared for the Performance.

Nissan is the company credited with popularizing the crossover/SUV genre with the Qashqai, so its first electric entry into the segment is an important one.

The Ariya certainly looks the part. Nissan’s designers were aiming for futuristic without going overboard and have managed that balance. It’s all about smooth shapes and minimal embellishments, with the body flowing back from the gloss-black blanked-off grille in simple lines. In our test car’s black paint it looked faintly threatening but other lighter colors give it a more sophisticated appearance.

Like the exterior, the interior is all about being minimalistic and futuristic. That means a very simple low-slung dash and center console with a few major controls hidden on the surface as touch-sensitive patches in the material. It’s an interesting middle ground between proper buttons and touchscreen-based controls.

Less minimal are the twin 12.3-inch screens – one for instruments and one for infotainment – plus the large head-up display offering supplemental driver information. Elsewhere, the designers have drawn inspiration from paper lanterns and traditional Japanese carpentry to create a calm interior ambience through softly backlit trim panels.

The Ariya’s cabin offers impressive space thanks to the flexibility of its platform. With no transmission tunnel and a slidable center console it feels open and spacious, with impressive legroom in the back – albeit at the slight expense of those in the front.

Our test drive was restricted to time with a pre-production version of the entry-level 63kWh model around a circuit, so offered limited real-world assessment, but gave a flavor of what buyers can expect when the car arrives in the UK in early summer.

Even the base-spec car has decent punch thanks to 214bhp and 221lb ft and offers the kind of instant linear progress that is the hallmark of EVs. Refinement seems good as well, although on a track populated only by other EVs, it’s hard to judge just how well it can blank out the usual road noise.

Similarly, initial impressions are that it rides really well, with a definite bias towards comfort which means bumps are handled well but corners provoke noticeable body roll. It will take tests or real roads rather than smooth racetrack tarmac to be sure.

Nissan says that that four-wheel-drive variant will be set up with a slightly more dynamic profile offering a touch more control in corners and under acceleration and braking.

What it won’t offer – and nor will any version of the Ariya – is single-pedal driving. In an act of apparent madness, the e-pedal function from the Leaf has been downgraded so it no longer brings the car to a complete stop.

A full assessment of the Ariya will have to wait until we’ve spent more time with the car on proper roads but initial impressions are that with a combination of style, space and performance, Nissan could be onto another winner with its latest electric SUV. 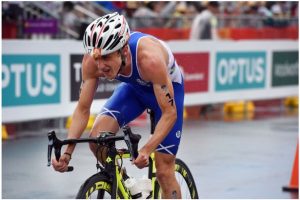 Commonwealth Games will be tough, but triathlete Grant Sheldon ‘can mix it with the big boys’