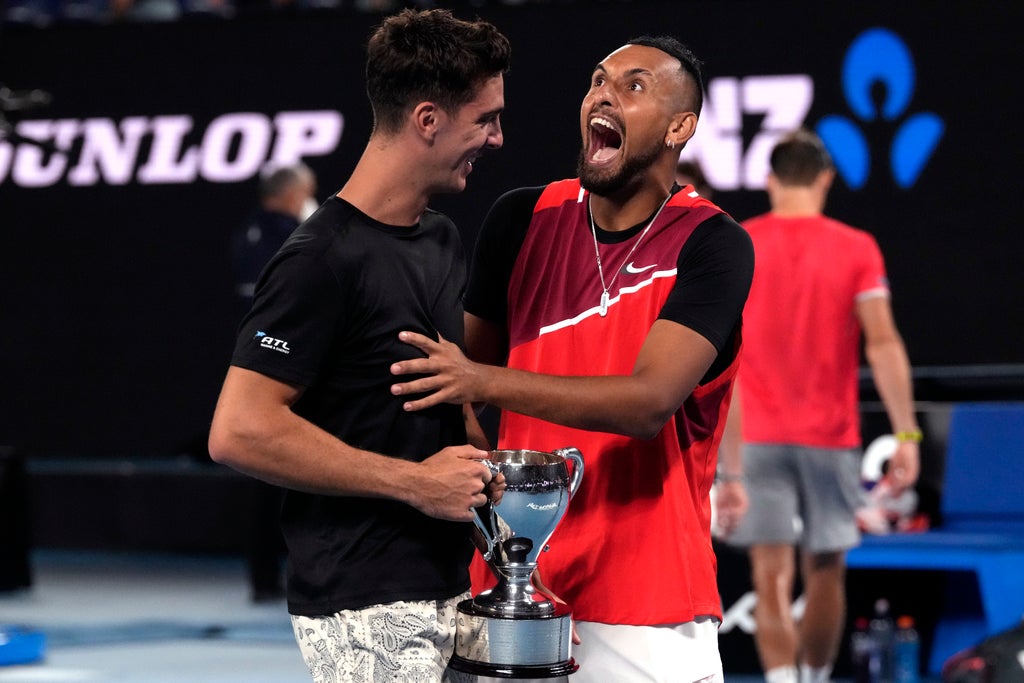 Nick Kyrgios called his first Grand Slam title the highlight of his career after “getting off the couch” to lift the Australian Open men’s doubles trophy.

Kyrgios received a wild card into the tournament with his childhood friend Thanasi Kokkinakis and the pair received a wave of raucous support until the very end.

They capped off a remarkable night for Australian tennis by following Ashleigh Barty’s singles triumph and defeating another Australian pair, Matt Ebden and Max Purcell, 7-5 6-4.

Kyrgios and Kokkinakis, the first all-Australian pairing to win the title since Todd Woodbridge and Mark Woodforde 25 years ago, celebrated with a smack to the chest and seemed genuinely amazed at their achievement.

“I won some big titles around the world, I played some amazing matches,” Kyrgios said. “This one ranks first for me.

“When I say I wouldn’t want to do it with anyone else, I mean it. It was just special. All week, winning every round, I didn’t take it for granted. it was soaking it.

“The dedication I showed all week for my team, and I’m so proud of myself. Doing it with Kokk is crazy.

“This is a memory that we will never forget. We’re going to get old and we’re always going to say, ‘Remember that time we got up off the couch and we just won the Oz Open?’

Kyrgios and Kokkinakis were roared by a packed Rod Laver Arena that brought the kind of crowd never seen before for doubles at Melbourne Park.

It hasn’t been without controversy, with a couple of the pair’s opponents objecting to their antics and partisan support, while Kyrgios had several fans ejected on Saturday for yelling during points.

“I would say we’ve created probably the best atmosphere this tournament has ever seen, to be brutally honest with you,” he said.

“Ash’s father came up to us and said the crowd was the best he had ever seen. Ash is obviously a great player, but I think the ratings speak for themselves. People watch my games, everywhere I play in the world, the stadiums are full for that reason.

It was also a special moment for Kokkinakis, who has struggled badly with injury problems in recent years but has now followed up with a first ATP title at home in Adelaide with a Grand Slam trophy.

He said: “I knew what I was capable of, but you always have doubts and you always think to yourself, ‘What if it doesn’t happen, what if my career isn’t planned the way I want it to be, or what if I never win. a degree or do I have an opportunity like that?’

“To have the summer that I’ve had, I was happy to get to a semi-final in Adelaide. And then to win, I said, ‘It doesn’t get any better than this.’ Then to win a Grand Slam after that, this month has been amazing for me.

By virtue of their victory, Kyrgios and Kokkinakis are already in a good position to qualify for the season-ending ATP Finals, but they will not play together at Wimbledon, with Kyrgios concentrating on singles.