As I stand on the corner of historic Maidan Square in the center of Kiev there is an eerie calm over the place where the people of Ukraine gathered to celebrate their independence from the Soviet Union in 1991 and it is normally the buzzing heart of the city.

The roads are almost empty and the normally bustling underground shopping center is closed. A few coffee stalls have opened where handful of people are queuing for their morning cappuccinos.

But they regularly glance skywards in case of attack after Vladimir Putin launched his invasion.

But as I walk towards the west of the city, it is a different picture. Lines of men and women stand at ATMs desperate to draw out cash and the highways are clogged with traffic. 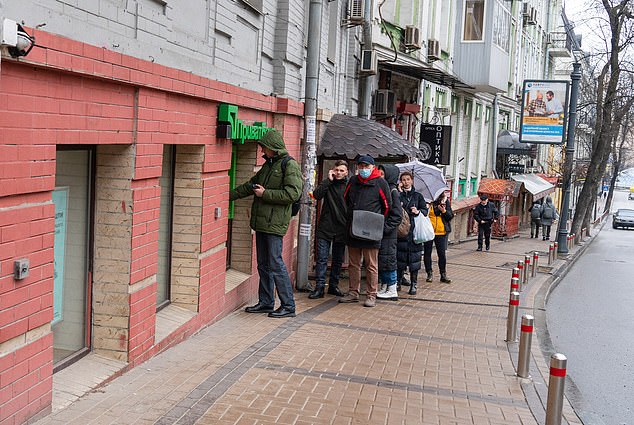 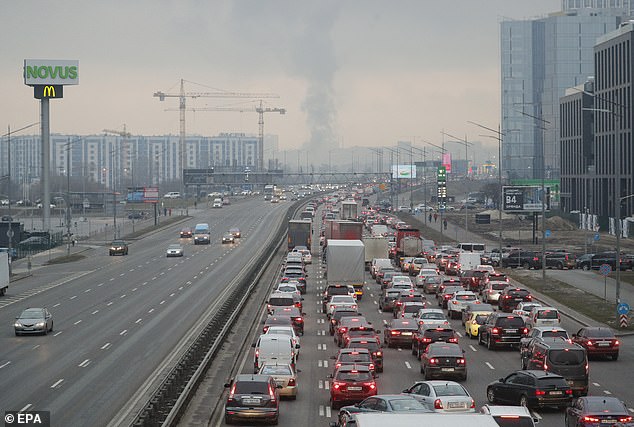 The people have emerged from where they took shelter when the air raid sirens sounded in the early hours of the morning.

Some are carrying on as normal – some are seeking to gather what they can before trying to escape.

On UKR TV news stations the message from the authorities to the people of Kiev is clear and consistent: They should stay at home, take some water and collect all the documents. If you hear the alarm, quickly go to the shelter. Right now roads are too busy, cars are bumper to bumper on the roads out of the city so it’s too difficult to leave.

On the streets I met politics student Katrina, 22, as she, her sister and aunt were packing their belongings into a car before driving west from their house two doors along from the British Embassy. 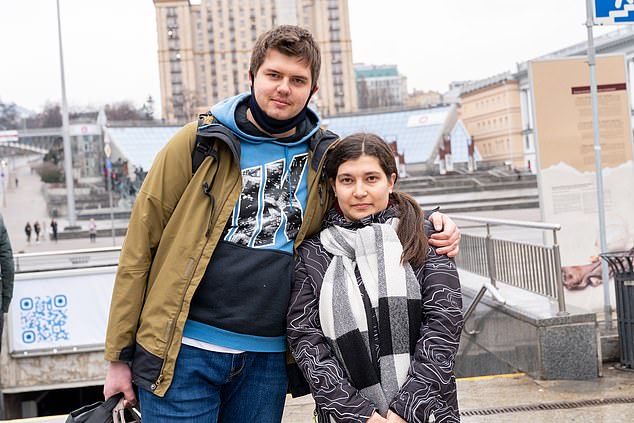 Anistasia and Denys, both 22, had just sat an IT exam online this morning, and were desperately trying to get to their home town of Vinnitsa, 200km west of Kiev

‘We are heading to my hometown of Vinnytsa about three hours drive west of here, she told me.

‘We know the traffic will be terrible, but we will feel safer there with my mother and family. We are worried about what will happen in Kiev if the Russians come here.

‘I am scared of course, but I know that people around the world are supporting us. I want my country to be safe and free.’

Anistasia and Denys, both 22, had just sat an IT exam online this morning, and were desperately trying to get to their home town of Vinnitsa, 200km west of Kiev.

‘There were explosions reported there so we don’t know if the trains will be operating. There is no firm information, only rumors flying around,’ Anastasia told me.

‘Of course we are worried, but the problem is that we can’t get good information,’ said Denys. 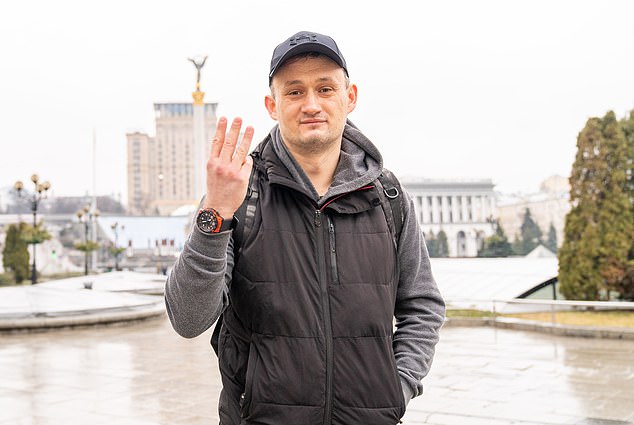 Civil servant and reservist soldier Mykola Rubehak, 40, told us he was going nowhere as red tail lights backed up on all the westward routes out of Kiev

Civil servant and reservist soldier Mykola Rubehak, 40, told us he was going nowhere as red tail lights backed up on all the westward routes out of Kiev.

‘I will stay here and fight,’ he vowed. ‘My friends are getting their children and elderly relatives out of Kiev but I will stay and resist. Putin cannot be allowed to do this in the 21st century, to invade a democratic country without consequences.

‘The USA and the west must show him somehow that he will be brought down if he continues, and I hope that will happen. ‘

As we spoke, he made the ‘trident’ emblem of the Ukraine armed forces with his fingers, to signify his determination to resist.

‘Thank you to Great Britain and the Queen – Please tell the world that we need more help to resist.’

At 5am this morning local time from Intercontinental Hotel where many international media have based themselves, I was woken up to the sound of missiles and air strikes as Ukrainians’ worst fears were realized.

As the crumps of explosions shook the windows of my hotel room as myself and MailOnline photographer Simon Ashton donned the body armor and helmets that have weighed a down, unused in their bag for the last month.

For an hour the night sky lit up in the distance to the north and east of the city as military targets were pounded by bombs, and we run to the basement for safety. 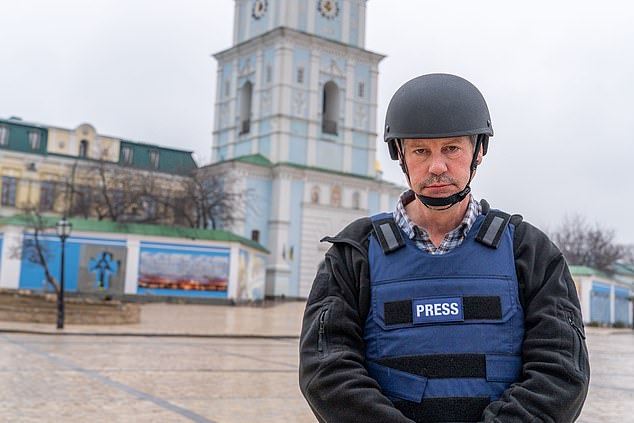 At 6.36am there was by far the loudest explosion from our perspective, believed to be an air strike on a military airfield near Kiev, which made the ground beneath our feet tremble.

By dawn there was an eerie calm as an overcast drizzly day began, broken only by the cheerful chimes of the bells of St Michael’s golden domed Monastery across the square from the hotel at 7am.

At 7.05am the first air raid sirens rang out all across the city, though no blitz followed in the central area at least.

Surreally, even as the dreaded noise of the sirens rent the air, a steady stream of headlights could be seen driving into the city as commuters came in to start the day.

But the calm wasn’t to last long as the full extent of the Russian invasion began to reveal itself, with troops attacking the border on three sides and air strikes right across the country, even as far west as Lviv, near the Polish border. 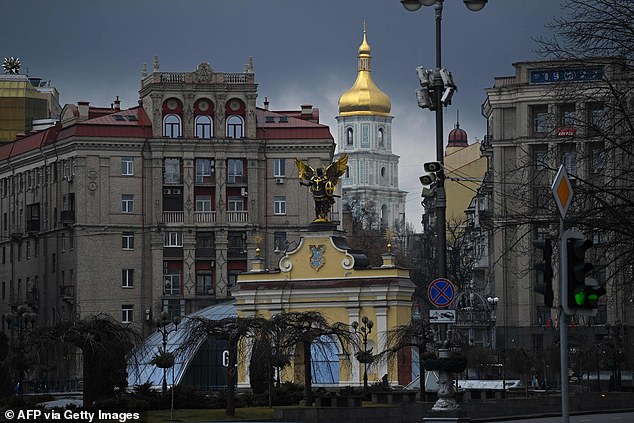 By 8am local time, queues of people were seen at bank ATMs in the city, perhaps the first sign of panic, following the introduction of a state of emergency across the country from midnight last night.

Police and soldiers stood on many of the street corners to keep order.

Long lines also formed at gas stations around the city, but with so many places being pounded from the air, it wasn’t obvious where it would be the safest place to flee to.

Having said that, although the streets were noticeably quieter than usual as the working day began, people were mostly calmly going about their business, perhaps still coming to terms with what might be next.

When I first arrived in this country a month ago, few Ukrainians took Putin’s saber-rattling seriously.

Most admitted that it was possible he might move into the Donbas to annex the pro-Russian breakaway republics of Luhansk and Donetsk, but very few believed Russia would mount a full-scale invasion of their neighbour. 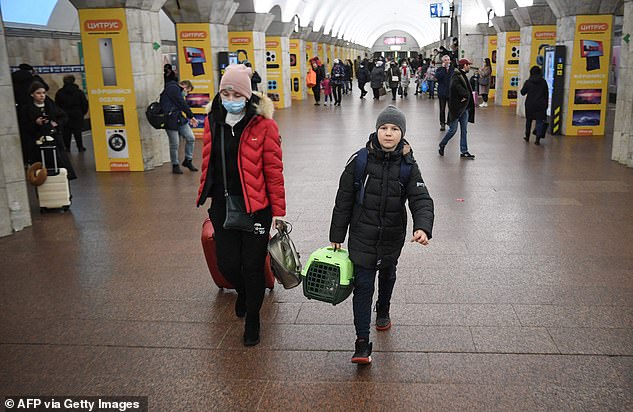 Yesterday evening, as I sat in a local restaurant with colleagues, the mood was sombre, and the streets of Kiev quiet, following Russia’s invasion of the Donbas two days earlier.

There had been two earlier occasions in the last few days when an invasion or air strikes were widely expected, but this time it felt decidedly more real.

With the multiple indicators cascading minute by minute, such as massive cyber attacks, the declaration of a state of emergency, Russia’s NOTAM alert and closing airspace in eastern Ukraine, the dreaded moment seemed much closer.

Earlier in the day, we had visited the Russian Embassy, ​​now deserted, where someone had planted wooden crosses to resemble gravestones, bearing the inscription ‘Russian Occupiers’.

A scrawled note on one read simply ‘Welcome to Hell’, no doubt to mean that Ukrainian defenders will fight to the death over every inch of their violated homeland.

But however bravely those soldiers and reservists fight against Putin’s invaders, no-one expects them to be able to resist the overwhelming might of the Russian military, now thought to number around 190,000 troops and clearly attempt on regime change in Kiev.

Ukraine will be no pushover, as the Kremlin planners have tacitly admitted with their construction of a field hospital, complete with blood supplies – and most tellingly, the provision of no fewer than 45,000 body bags for their troops.

The Ukrainians have already shown their resolve in holding the line against the rebel fighters of the Russian-backed breakaway republics of Donetsk and Luhansk, for eight years, but the forces now moving against them are of a different order.

Massively outnumbered and outgunned, the best the Ukrainians can now hope for might be to launch a guerrilla offensive against Putin’s invaders and pray that the number of soldiers returning home in those body bags will eventually convince the Russian public of the utter madness of the slaughter being conducted in their name.