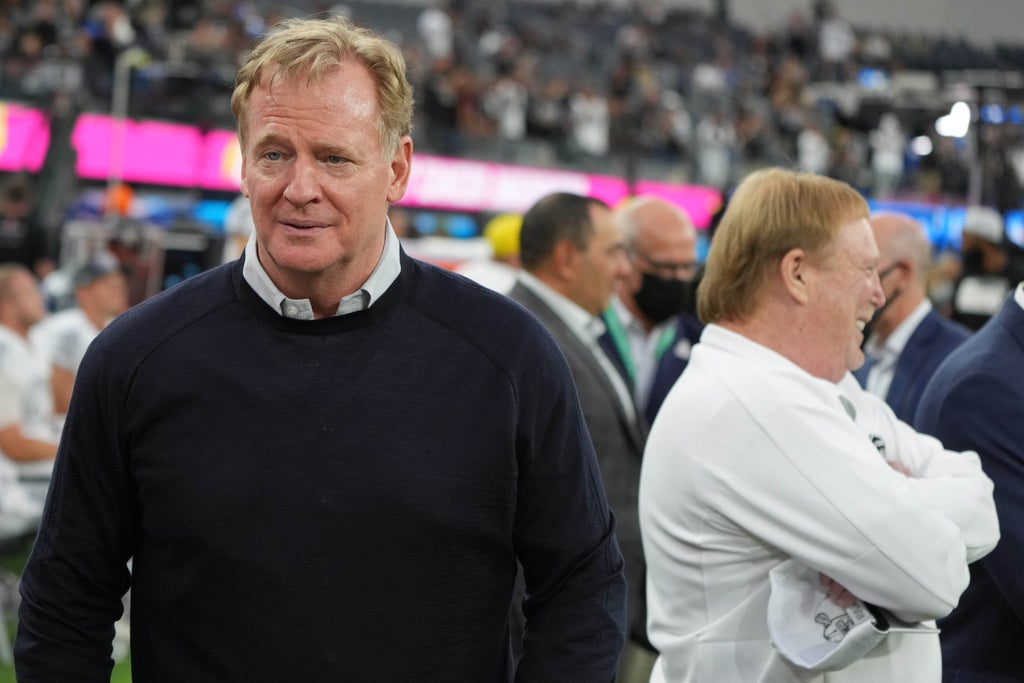 NFL Commissioner Roger Goodell has admitted that its diversity is “unacceptable”, after former Miami Dolphins Head Coach Brian Flores filed a discrimination lawsuit days ahead of the league’s biggest event of the year.

Mr Goodell sent a memo to the NFL’s 32 teams and all its employees on Saturday saying that, while it had made “significant efforts” to promote diversity, when hiring head coaches in particular the league had fallen short.

“Racism and any form of discrimination is contrary to the NFL’s values,” he wrote.

“We have made significant efforts to promote diversity and adopted numerous policies and programs which have produced positive change in many areas, however we must acknowledge that particularly with respect to head coaches the results have been unacceptable.”

The league will retain the help of outside experts to help review its current policies, guidelines and initiatives relating to diversity, equity and inclusions, he said.

The memo to staff, obtained by ESPN, came five days after Mr Flores sued the NFL and three of its teams – the Miami Dolphins, the Denver Broncos and the New York Giants – over what he claims are racist hiring practices for coaches and general managers.

The lawsuit, filed in the US District Court for the Southern District of New York on Tuesday, alleges that the league is “rife with racism” and that teams conduct “sham” interviews to say they are following the Rooney Rule – where teams must interview at least two external minority candidates for head coaching jobs and one external minority candidate for offensive and defensive coordinator positions.

Mr Flores, who was fired as head coach of the Dolphins in January despite back-to-back winning seasons, also alleged that Dolphines owner Stephen Ross offered to pay him $100,000 for every game the team lost in the 2019 season so it could get a better draft pick.

Mr Goodell vowed to “thoroughly and independently” review the allegations of tanking, saying the NFL does “take seriously any issue relating to the integrity of NFL games”.

“These matters will be reviewed thoroughly and independently. We expect that these independent experts will receive full cooperation from everyone associated with the league or any member club as this work proceeds,” he said in the memo.

“We will reevaluate and examine all policies, guidelines and initiatives relating to diversity, equity and inclusion, including as they relate to gender,” the memo said.

“We are retaining outside experts to assist in this review and will also request input from current and former players and coaches, advocates and other authorities in this area.

“Our goal is simple: make our efforts and those of the clubs more effective so that real and tangible results will be achieved.”

Mr Goodell said that they “understand the concerns expressed by Coach Flores and others this week” and would start taking steps now to review its current diversity efforts.

“While the legal process moves forward, we will not wait to reassess and modify our strategies to ensure that they are consistent with our values ​​and longstanding commitment to diversity, equity and inclusion,” he said.

“In particular, we recognize the need to understand the lived experiences of diverse members of the NFL family to ensure that everyone has access to opportunity and is treated with respect and dignity.”

Mr Goodell admitted that there is “a lot of work to do” but that the NFL will “seize” the moment.

“There is much work to do and we will embrace this moment and seize the opportunity to become a stronger, more inclusive league,” he wrote.

Mr Goodell’s comments on Saturday mark a swift turnaround from the NFL’s public statement in the immediate aftermath of the suit being filed, where the league issued a flat-out denial and called the allegations “without merit”.

“The NFL and our clubs are deeply committed to ensuring equitable employment practices and continue to make progress in providing equitable opportunities throughout our organizations,” the league said in a statement on Tuesday.

“Diversity is core to everything we do, and there are few issues on which our clubs and our internal leadership team spend more time.

“We will defend against these claims, which are without merit.”

Attorneys for Mr Flores were skeptical about the sudden change of heart, telling ESPN in a statement that they “suspect that this is more of a public relations ploy than real commitment to change”.

“For too many years, the NFL has hid behind the cover of foundations that were supposed to protect the rights of Black players and coaches, all while letting systemic racial bias fester in its front offices. The NFL is now rolling out the same playbook yet again and that is precisely why this lawsuit was filed,” they said.

The statement added that no one from the NFL has reached out to them for a discussion “about real change” and that they “believe that a court or governmental agency must order a federal monitor to oversee the NFL as the NFL cannot continue to police itself ”.

There is currently just one Black head coach – Pittsburgh Steeler’s Mike Tomlin – across all 32 teams in the NFL.

There are also no Black team owners and very few Black general managers.

And yet, 70 percent of all NFL players are Black or another ethnic minority.

The three teams named in the suit have all denied Mr Flores’ allegations.

Both Mr Ross and Broncos’ President of Football Operations John Elway called the allegations “false and defamatory”, while the Giants called the claims “disturbing and simply false”.

The turmoil within the NFL comes just days away from the Superbowl where the Los Angeles Rams will take on the Cincinnati Bengals at SoFi Stadium in California on 13 February.