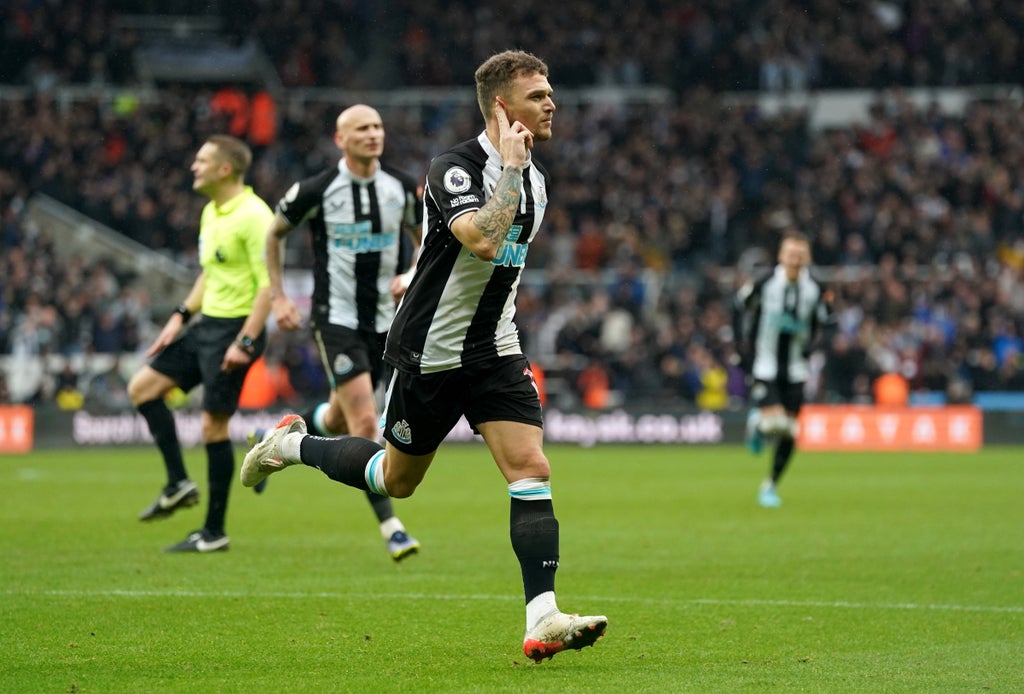 Newcastle are facing up to life without new star Kieran Trippier after his flying start on Tyneside was halted by injury.

The Magpies confirmed on Monday that the 31-year-old, whose winning goal against Aston Villa on Sunday lifted the club four points clear of the Premier League relegation zone, fractured the fifth metatarsal in his left foot during the game and will be sidelined for several weeks.

A statement on the club’s official website said: “Newcastle United defender Kieran Trippier is set to be sidelined for the club’s upcoming fixtures after fracturing a bone in his foot during Sunday’s 1-0 victory over Aston Villa.

“The 31-year-old scored the game’s only goal at St James’ Park to help the Magpies to a third successive Premier League win, but had to be substituted early in the second half after sustaining a foot injury.

“Trippier underwent an X-ray immediately after the game and scans have shown a fracture to the fifth metatarsal bone in his left foot. Everyone at the club wishes Kieran a speedy recovery.”

Head coach Eddie Howe revealed that his £12million January signing from Atletico Madrid was heading for hospital in the immediate aftermath of the game, and his worst fears were confirmed by medics.

Such is the impact the England full-back, who also scored in Tuesday’s 3-1 win over Everton, has made since his arrival that he was named captain in the absence of Jamaal Lascelles at the weekend and his injury – he is likely to miss a significant portion of the remainder of the season – will come as a major blow to the Magpies’ survival hopes.

His four league games to date have yielded 10 points and with likely understudy Javier Manquillo having earlier limped off with suspected ankle ligament damage – his injury is not thought to be serious – Howe has a sizeable gap to plug.

The 44-year-old can at least comfort himself with the knowledge that loan signing Matt Targett, who was ineligible to face parent club Villa, will be available for Saturday’s trip to West Ham, as will £13m central defender Dan Burn, who made a hugely impressive debut on Sunday as he finally got a chance to live out his boyhood dreams.

Blyth-born Burn, who was released by the club as an 11-year-old, told NUFC TV: “It was amazing. It’s stuff you dream of when you’re a kid when you come here and you’re watching them run around on the pitch, [Alan] Shearer and Rob Lee and all those lot, and then you come and do it yourself. I don’t think it’s probably quite sunk in yet.”

Trippier’s second goal in six days, a sweet 35th-minute free-kick after referee Craig Pawson had been advised by VAR to rethink his decision to award a penalty, ultimately clinched the points.

However if they had been disappointed by a VAR intervention immediately before Trippier’s strike, Newcastle were grateful for another after Ollie Watkins had headed home what he thought was a 61st-minute equaliser.

Villa boss Steven Gerrard left St James’ admitting his team had got what they deserved.

Gerrard said: “It was a really bad day for us. I was surprised at the performance that we gave. There were no signs of that, certainly, in the preparation, but collectively, we need to improve. We’ve got a lot of work to do.

“We didn’t deserve anything out of the game because of the level of performance we gave, so it’s clear that we have a lot of work to do and there are some changes to be made in the team as well.”