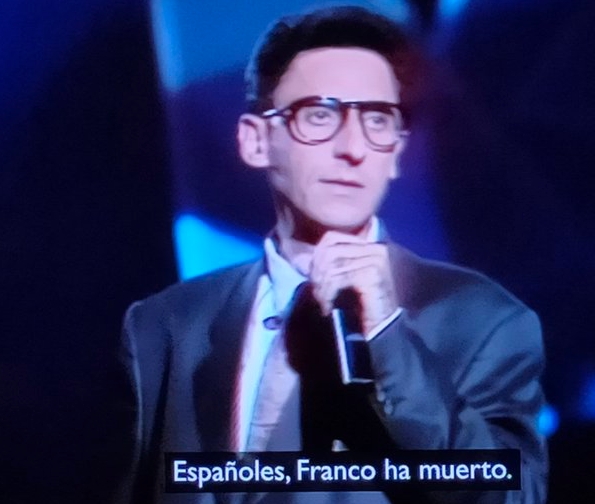 Had they started their careers now, Eugenio, Manolo de Vega, Pepe da Rosa, Josele and Chiquito de la Calzada would have spent this New Year’s Eve selling roasted chestnuts in front of El Corte Inglés. Jokes (and jokesters) are no longer popular. It is up to sociology to analyze why, but they have been displaced by memes and zascas, sparkling and incisive at the same time: their grace resides in that they ridicule and their ingenuity in that they vituperate without actually insulting. Chunks It is nothing more than that: a succession of memes and zascas with a musical background. Perhaps that is why it is the only end-of-the-year show that anyone who takes it as sharp and biting (hey, yeah) can admit they’ve seen without feeling embarrassed.

This year, the program of La 2 dedicated to rescuing with grace the musical archive of TVE has had the advance (broadcast before the chimes) Santa Raffaella, a tribute to Raffaella Carrá, who passed away this year. Great idea: nothing better to raise spirits in times of pandemic than the happy songs and vigorous pirouettes of the unforgettable Italian. Perhaps somewhat excessive in its approach (“more than half a century in the forefront of European pop”, it has been said), the special seemed at times a mixture of Red Mill, Gluttony Gluttony and some dark fantasy by José Luis Moreno. The performances of Ana Guerra, Soleá Morente and La Casa Azul have been good, although given the spectacular nature of the tribute, the participation of more well-known artists outside the Radio 3 newsroom would have been appreciated.

And after the ritual of the grapes came the festival of labels. Every program that is broadcast on these dates carries the obligation to function as a corollary of the season that ends. As I had nothing better to do, I dedicated Friday afternoon to making a pool of topics and people that throughout 2021 had given rise to talk and about which, although some are difficult to take as a joke, it was hoped that Chunks mock and scoff. The pandemic and its management, Philomena, the volcano, the price of electricity, inflation, Tarajal and the grotesque shot of the Capitol came to mind like a bolt of lightning; As for hominids, Miguel Bosé, Villarejo, the emeritus king and the entire political class seemed to me potential victims of tricks. With the list in one hand and polvorón in the other, I started to watch TV.

Of course, there have been allusions to the La Palma eruption, the Ceuta conflict, the electricity tariff and vaccines. As for the current political situation, whether or not it is a consequence of the criticism received last year (which accused the scriptwriters of charging more inks towards one side than the other), this time the mockery has been quite distributed. The collejas have resounded to Errejón, the Monarchy, Pedro Sánchez and the Falcon, Ayuso and freedom in Madrid and Carmona and his entry into Iberdrola.

And then there is the music. Those who are fed up with controversies can enjoy Chunks ignoring the signs. There is no musical style that does not have a place in the program: there is pop, rock, copla, rumba, singer-songwriters, disco hits … The recordings cover the entire history of TVE, from the 1950s to today. And despite everything, there are no abrupt jumps; the songs follow one another with intention, always, yes, within 50 seconds of rigor. The groups and singers do not go away either, although the allusions to shoulder pads and hairspray are not predictable.

Next year this will not be able to be broadcast Chunks just as we saw it last night. Its commendable adherence to certain current affairs gives it an expiration date, which cannot be said of the programs of other networks that, with other faces and other names, remain exact replicas of their predecessors. In Telecinco, some decorated presenters gave way to famous singers and magic tricks. In Antena 3 they resorted to something as novel as Your face is familiar to me.

Will New Year’s Eve on television ever change? They say that 90% of the professions of 2050 have not yet been invented, but we are on our way to making the television programmer on New Years one of the five or six that remain. If you are of an age to decide which career to study, seriously consider that option: it has a future and it is very easy, because it is enough to repeat year after year the formula that someone coined in 1974.