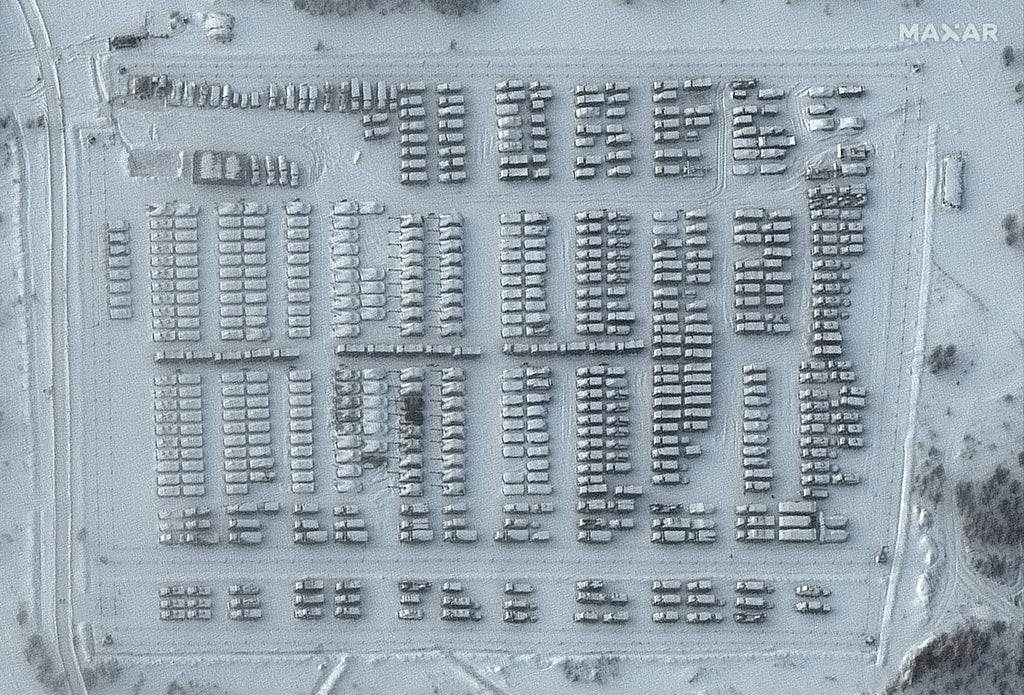 New satellite images appear to show a flurry of Russian military activity at several locations near Ukraine’s border, as fears grow of an imminent invasion.

There have been reports Moscow may launch an attack on its ex-Soviet neighbor on Wednesday as US officials now claim 130,000 Russian troops are at Ukraine’s border in a marked increase from the 100,000 widely reported.

Russia, which has repeatedly denied plans to invade, is holding large military exercises in ex-Soviet Belarus, part of a dramatic buildup of forces to the north, east and south of Ukraine.

US based private company Maxar Technologies, which has been tracking the buildup of Russian forces for weeks, said on Tuesday that images taken on Sunday and Monday captured significant new activity in Belarus, annexed Crimea and western Russia.

Maxar pointed to the arrival of several large deployments of troops and attack helicopters as well new deployments of ground attack aircraft and fighter-bomber jets to forward locations.

The images also captured the departure of multiple ground forces units from existing garrisons along with other combat units seen in convoy formation, Maxar said.

The new images come, however, as some troops in Russia’s military districts adjacent to Ukraine returned to bases this morning after completing drills.

The move, that could de-escalate frictions between Moscow and the West, was announced by Russia’s defense ministry on Tuesday.

A spokesperson from Russia’s defense ministry confirmed the withdrawal but said that exercises are still going on in the region.

“The Russian Armed Forces are continuing a range of large-scale exercises for operational training of troops and forces. Practically all military districts, fleets and the Airborne Troops are taking part,” the spokesman said.

The British government is waiting to see the scale of the reported Russian withdrawal, with one source saying it would have to make a difference to the ability to invade to be meaningful.

When asked about reports of some Russian forces leaving the border, UK foreign secretary, Liz Truss said in order to believe Russia’s insistence it has no plans to invade Ukraine it must remove all its troops amassed near its border with the country.

“The Russians have claimed that they have no plans for an invasion, but we will need to see a full scale removal of troops to show that is true,” Ms Truss told LBC radio.

“We have a rule: don’t believe what you hear, believe what you see,” he tells journalists following reports some Russian troops were returning to base. “When we see a withdrawal, we will believe in a de-escalation.”

He adds that the diplomatic route Ukraine was pursuing with its allies is working at preventing further escalation.

Diplomatic efforts are ongoing with German Chancellor Olaf Scholz arriving in Moscow, where he is due to meet President Vladimir Putin.

Ahead of the meeting, he attended a wreath-laying ceremony at the Tomb of the Unknown Soldier by the Kremlin Wall.

See also  Why do we care about influencers' opinions on Ukraine?