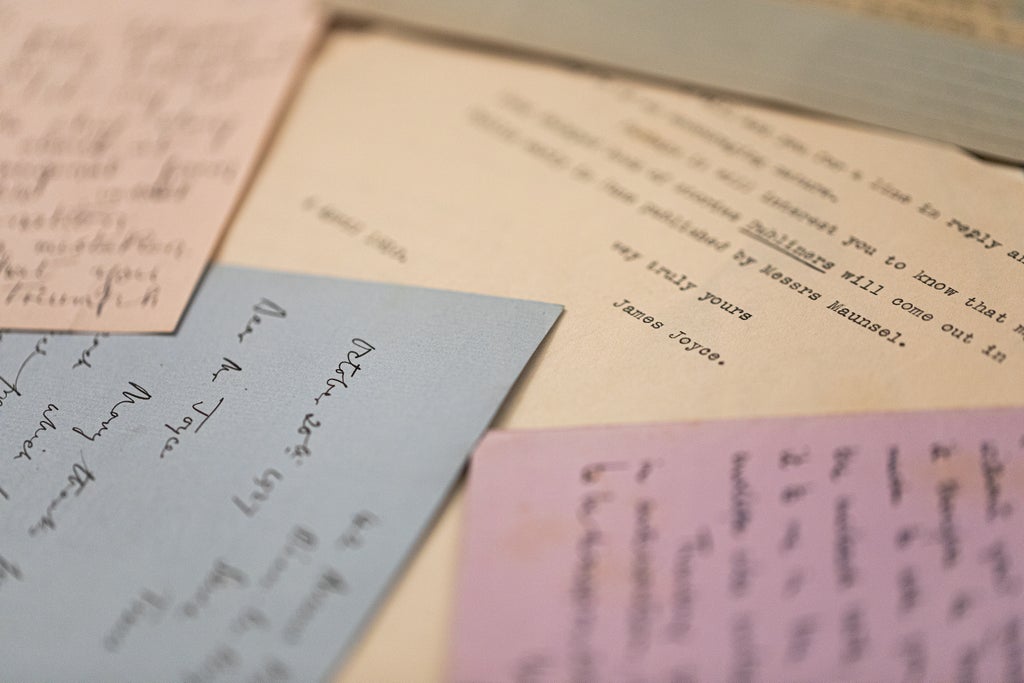 A new collection of books, documents and artefacts belonging to pioneering 20th-century writer James Joyce will shed light on his close relationship with his protege Samuel Beckett experts have said.

Joyce’s grandson, Stephen James Joyce, and his wife Solange have donated letters and telegrams between the two influential Irish writers, along with personal items including pens, rings, and a manuscript of his poetry collection, to the University of Reading

The donations will be accessible to anyone via appointment with the university’s collections service, alongside its existing Samuel Beckett Collection.

A telegram sent by Beckett to the Ulysses author in Paris on his 49th birthday is among the items in the collection, which reads: “Teems of times and happy returns. Beckett”.

Dr Mark Nixon, an English Literature researcher at the University of Reading and co-director of its Beckett International Foundation, describes the document as a historic “gem”.

“The unusual birthday telegram from Beckett to Joyce says a lot about them as friends,” he said.

“Short and sweet, the playful language hints at a shared sense of humor and shows the respect Beckett had for the writer who greatly influenced his own writing style.

“The new collection silver-plates the relationship we knew existed between Beckett and Joyce, with their personal correspondence shedding fresh light on the closeness between the two.

“Such gems among the collection will prove invaluable to those studying these two historic writers.”

Other documents in the collection include several letters to Joyce from Beckett and other writers including Brave New World author HG Wells and from his friends Harriet Shaw Weaver and Paul Leon.

Visitors will also be able to survey a necklace belonging to Joyce’s wife Nora, a handwritten poem expressing his love for her, called Ecce Puer, and a manuscript of his poetry book titled Chamber Music.

Edward Beckett, the nephew of the Waiting For Godot author, welcomed the joining together of the two writers’ collections.

“It is wonderful to have the Beckett and Joyce archives together under the same roof,” he said.

“The two writers were close friends and their Estates and families had also stayed close.

“That it was possible to unite their literary archives is an achievement to applaud.”

Professor Robert Van de Noort, vice-chancellor of the University of Reading, said the “treasured” artifacts will be much-used by researchers and the public.

“James Joyce was a writer who transformed our ideas about the world, about creativity and about humanity,” he said.

“His letters, manuscripts and artefacts are rightly treasured but we are taking this collection not just to protect it but to share it.

“Due to the extraordinary scale and breadth of the published material, I know that the collection will be heavily used by researchers, scholars and the public at all levels of study and from around the world.

“It will of course enhance teaching, learning and research within our own University community and will inspire even more innovation and creativity in how collections are accessed, used and understood in an increasingly digital world.”

Guy Baxter, head of archive services at the university, said staff are working hard to catalog the collection to make it easily accessible.

The introduction of The Solange And Stephen James Joyce Collection collection has been announced on the 140th anniversary of the writer’s birth, and on the centenary of the publication of his flagship novel, Ulysses.