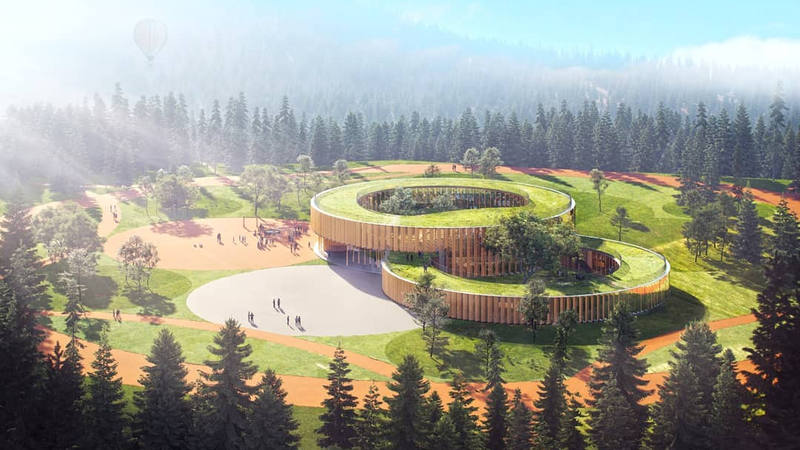 On July 2, 2011, torrential rain drowned Copenhagen causing losses estimated at 700 million euros. Like many cities, the Danish capital has most of its surface sealed and the sewers were not enough. The great summer storm was described, statistically, as an event that occurs once every 1,000 years, but the accounts did not come out: in both 2010 and 2014 the city experienced storms that happen once every 100 years. The reality is that the higher frequency of heavy rains puts Copenhagen at the forefront of climate change.

To do? Urban innovation can provide a solution and the Copenhagen city council promoted more than 300 projects to transform the city in the next 20 years. The Ramboll Studio Dreiseitl study directly proposed a plan to manage the floods that included intervening in the eight central basins of the city and a total area of ​​34 km². The idea was to intervene boulevards, parks and squares, to provide space for the city to flood. A kind of escape route to nature that is part of the so-called Blue-Green infrastructures (as opposed to “gray” infrastructure or traditional engineering), which seeks to integrate natural areas into urban spaces to address essential services.

It is an example highlighted by the European Union as an ideal of what it calls New European Bauhaus, the architectural concept in vogue for Brussels since January this year, which can be summed up in an attempt to combine sustainability, inclusion and aesthetics. According Ursula Von der Leyen, President of the European Commission, the New European Bauhaus (which steals the name of the historic German school) “aims to create a new lifestyle, which requires less carbon and is inclusive and affordable for all”.

After the beautiful words there is for the moment a very limited economic item (literally “Without a specific predefined budget” and with 85 million euros from EU programs in 2021-2022) which seeks to initiate a top-down movement, a kind of “appeal to artists, designers, engineers, scientists, entrepreneurs, architects and students” within the framework of the European Green Deal that seeks to address challenges related to climate and the environment . “This summer’s floods and their tragic consequences in Belgium and Germany also brought the harsh reality of climate change to Europe,” said the director general of the European Commission’s Directorate-General for the Environment. Florika Fink-Hooijer.

The first phase of the New European Bauhaus (from October 2020 to June 2021) has been a round table of professionals in search of examples that, like the one in Copenhagen, inspire the principles of the new movement. The second, as of September this year, is the preparation and implementation of pilot projects supported by calls. Finally, starting in January 2023, the third phase will seek to amplify ideas and measures making them available to cities, towns, architects and designers.

Within the current second phase, the prizes were awarded in September for the winning projects of the New European Bauhaus 2021, which awarded 30,000 euros to different initiatives and where six Spanish projects were recognized. The project ‘Gardens in the air’, for urban renaturation in the Sevillian neighborhood of Three Neighborhoods-Amate, was the winner in the category ‘Buildings renovated with a circular spirit’, and the project ‘The factory of a lifetime‘, conversion of an old cement factory in The Saints of Maimona (Badajoz) in a community space it was awarded in the category ‘Regenerated urban and rural spaces’.

Gardens in the air, where sixty people from 20 creative groups have been involved, is an ingenious proposal to take advantage of the water discarded by air conditioning machines destined to the creation of vertical gardens of aromatic plants.

Change the world without giving up aesthetics

Redefining the public space is one of the main ideas. In the category “Reinvented places to meet and share”, the Common Ground project in Radwanice, Poland, addresses urban expansion in rural areas and defends the construction of collective spaces (compost, rainwater collector, shared garden kitchen, laundry, common play area and greenhouse garden) versus the reality of fences leading to a closed society.

To fix its aesthetic aspiration, the European Commission gives as an example the micro-apartments for the homeless designed by Peter Barber Architects in the London neighborhood of Camden, a sample of social architecture that does not stigmatize by design. Can future proposals reach that level?

In 1918, Walter Gropius thus proclaimed in the manifesto of the original Bauhaus his desire: “Let us wish, let us design, let us all create the new structure of the future, in which everything will constitute a single whole, architecture, plasticity, painting and that one day it will rise towards the sky of the hands of millions of craftsmen as a crystalline symbol of a new faith ”. Without so much ambition for now, the European Union hopes that some spirit of change will ignite in a world with greater urban challenges than 100 years ago.