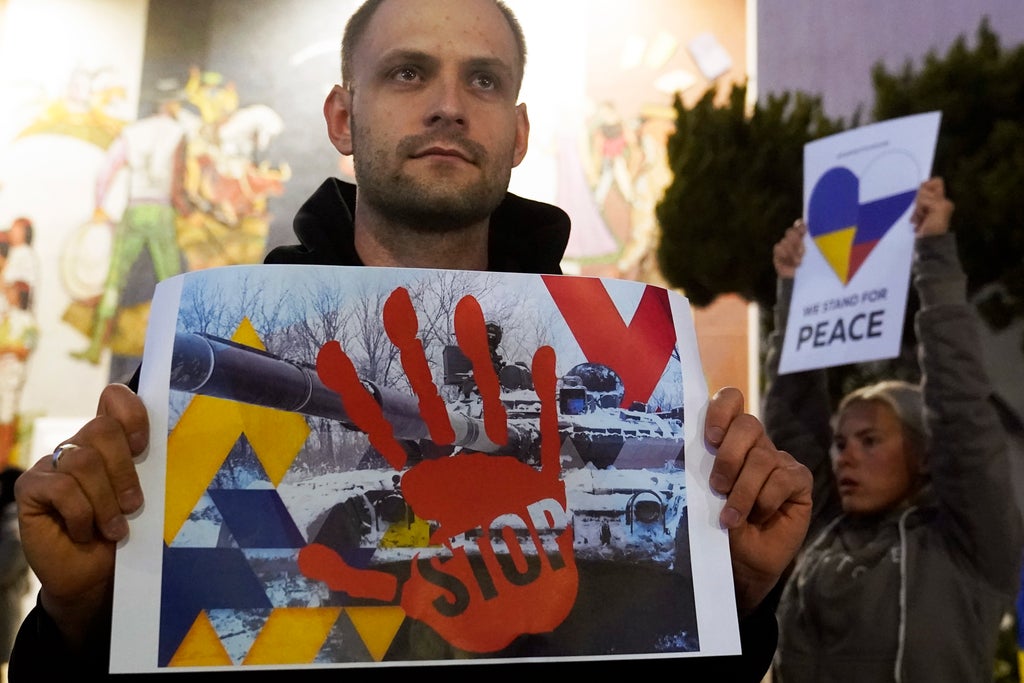 Fresh strikes have hit Kyiv amid warnings Russian forces are closing in on the capital as Nato allies prepare to determine the West’s next steps against the Kremlin.

The Ukrainian foreign minister, Dmytro Kuleba, said in a tweet just before 4am on Friday that “horrific rocket strikes” hit Kyiv in an attack he compared to the city’s 1941 shelling by Nazi Germany.

“Last time our capital experienced anything like this was in 1941 when it was attacked by Nazi Germany,” he said.

“Ukraine defeated that evil and will defeat this one. Stop Putin. Isolate Russia. Sever all ties. Kick Russia out of (everywhere).”

Meanwhile, Ukrainian President Volodymyr Zelensky said the government had information that “subversive groups” were encroaching on the city, as US Secretary of State Antony Blinken said Kyiv “could well be under siege”.

US officials believe the action is an attempt by Mr Putin to dismantle Ukraine’s government and replace it with his own regime.

Russian forces launched a full-scale invasion in the early hours of Thursday, thought to be Moscow’s most aggressive action since the Soviet invasion of Afghanistan in 1979.

By the end of the day, the Ukrainian government said 137 civilians and military personnel had been killed.

However, the UK’s Ministry of Defense (MoD) said it is “unlikely” Russia achieved its planned objectives for the first day of its military action in Ukraine, crediting “fierce resistance” from the Ukrainian forces.

The MoD said in a statement just after 1am: “The Ukrainian Armed Forces have reportedly halted Russia’s advance towards Chernihiv. Fighting probably continues on the outskirts of the city.

“It is unlikely that Russia has achieved its planned Day 1 military objectives. Ukrainian forces have presented fierce resistance across all axes of Russia’s advance.”

Mr Johnson told his Cabinet on Thursday night that the UK could be proud of its role in supporting Ukraine, after the Prime Minister announced the “largest and most severe” package of sanctions Russia has ever faced to punish Mr Putin, whom he labeled a “ blood-stained aggressor”.

Among the new UK sanctions introduced were measures to hit five further oligarchs, including the Russian president’s former son-in-law, and to target more than 100 businesses and individuals.

Mr Johnson said he was sanctioning “all the major manufacturers that support Putin’s war machine”, will ban Aeroflot from touching down plans in the UK and will freeze the assets of all major Russian banks, including immediately against VTB.

In the US, Mr Biden also announced extra sanctions to target Russian banks, oligarchs and high-tech sectors, with more troops deployed to Germany to bolster Nato.

“Putin is the aggressor,” Mr Biden said. “Putin chose this war, and now he and his country will bear the consequences.”

He said: “Tomorrow, Nato will convene a summit – we’ll be there – to bring together the leaders of 30 allied nations and close partners to affirm our solidarity and to map out the next steps we will take to further strengthen all aspects of our Nato alliance.”

She wrote on Twitter: “First, this package includes financial sanctions, targeting 70% of the Russian banking market and key state owned companies, including in defence.

“Second, we target the energy sector, a key economic area which especially benefits the Russian state. Our export ban will hit the oil sector by making it impossible for Russia to upgrade its refineries.

“Third: we ban the sale of aircraft and equipment to Russian airlines.

“Fourth, we are limiting Russia’s access to crucial technology, such as semiconductors or cutting-edge software.

“Finally: visas. Diplomats and related groups and business people will no longer have privileged access to the European Union.”

She added: “These events mark the beginning of a new era. Putin is trying to subjugate a friendly European country. He is trying to redraw the map of Europe by force. He must and he will fail.”

The UN Security Council will on Friday vote on a resolution that would condemn Russia’s military aggression against Ukraine “in the strongest terms”, and demand an immediate halt to Russia’s invasion and the withdrawal of all Russian troops.

Ukraine’s President described as heroes those who had died in the conflict.

In a video address he said Russia’s claim it was only attacking military targets as false and civilian sites also had been struck.

He said: “They’re killing people and turning peaceful cities into military targets. It’s foul and will never be forgiven.”

Mr Zelensky said all border guards on the Zmiinyi island in the Odessa region were killed on Thursday, while Ukraine also lost control of the Chernobyl nuclear site.

However local media reported troops had regained the Hostomel airport from Russian control.

A statement from the MoD said: “Russian forces have highly likely captured the Chernobyl nuclear power plant. Workers have reportedly been detained by Russian troops.”