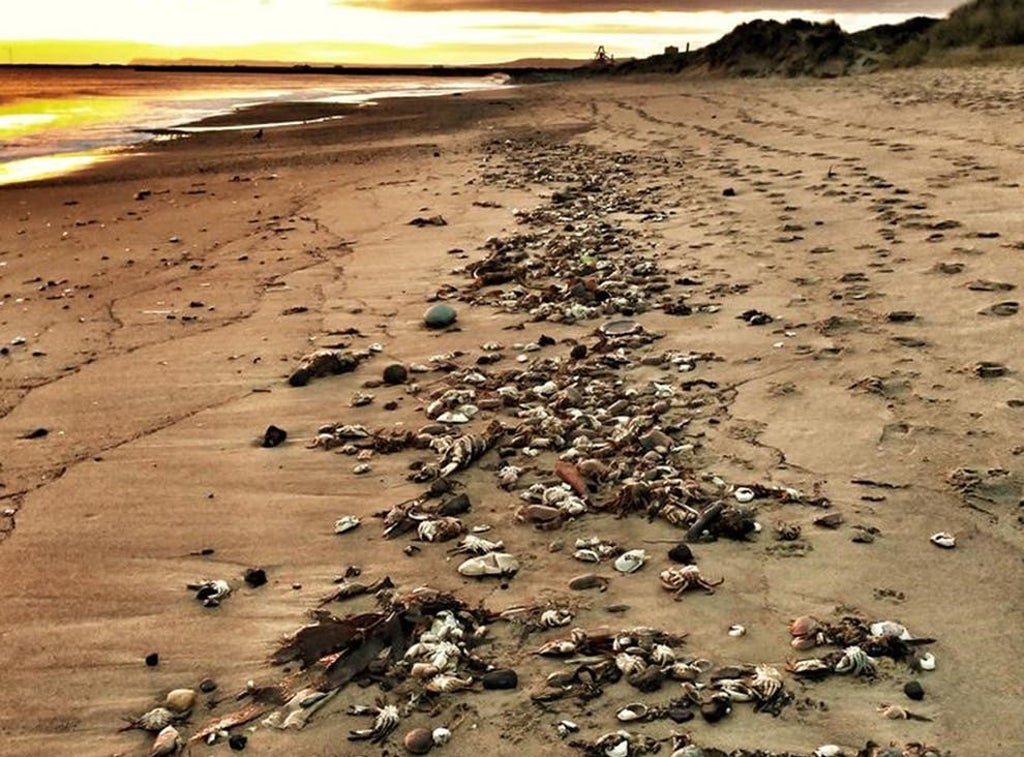 The mysterious deaths of tens of thousands of crabs and lobsters along England’s northeast coast may have been caused by dredging linked to the government’s new flagship freeport in Teesside.

Countless crustaceans appeared on sands stretching from Saltburn in North Yorkshire up to Seaham in County Durham last October in scenes described as “apocalyptic”.

A government report concluded the deaths were caused by naturally occurring algal bloom. But a new independent study has offered evidence the deaths may have been caused by the work on the freeport, which formed part of Boris Johnson’s government’s post-Brexit levelling-up agenda.

Researchers suggested a specific chemical, pyridine, appears to have been repsonsible for kiling the crabs.

The deadly toxin has been dumped into the Tees estuary for more than a century but tends to do no visible harm because it quickly settles into the sediment on the waterbed.

But dredging of the estuary mouth in preparation for the new freeport may have released huge quantities of the substance back into the water, where it is being fatally digested by crustaceans, the study says.

Data showed that some 400mg of the chemical was found in some dead crabs at Saltburn. In a control group of crabs from Penzance in Cornwall the average was less than 6mg.

“Clearly this a pretty unpleasant chemical appearing in a quantity that is just not there naturally,” said Tim Deere-Jones, the independent marine pollution consultant who was commissioned by the Whitby Commercial Fishing Association to conduct the study. “And it is appearing there at the same time as this dredging is taking place. If that’s a coincidence, it is a huge one. Certainly, it needs to be looked into further.”

As part of his work, I have requested data from the Department for Environment, Food and Rural Affairs about the levels of more than 100 chemicals in the water in the area. Of all of them, only pyridine screamed out as being found in substantially higher quantity there than in control samples from around the rest of the country.

“How Defra has not seen that and felt it requires further investigation, I don’t know,” said Mr Deere-Jones.

The Whitby Commercial Fishing Association is now calling for a pause to all dredging while further information is gathered. It says its members’ livelihoods are “under threat and our environments eroded”.

The Teesside freeport has been a central plank of Boris Johnson’s plans to level up the north east.

The region’s Conservative major, Ben Houchen, who has championed the project as a way to bring jobs and investment into the area, said dredging was not carried out by the freeport itself.

“The only dredging that has taken place is that carried out by PD Ports as the Statutory Port Authority,” he said, adding: “I, like everyone across Teesside, Darlington and Hartlepool, are concerned about the impact the death of so many crabs and lobsters have had on the livelihoods of people from across Teesside and the North East coast that rely on a healthy sea.

“The Tees and the North Sea play a massive role in our communities, and I hope that we see our sea life and coast return to normal as soon as possible.”