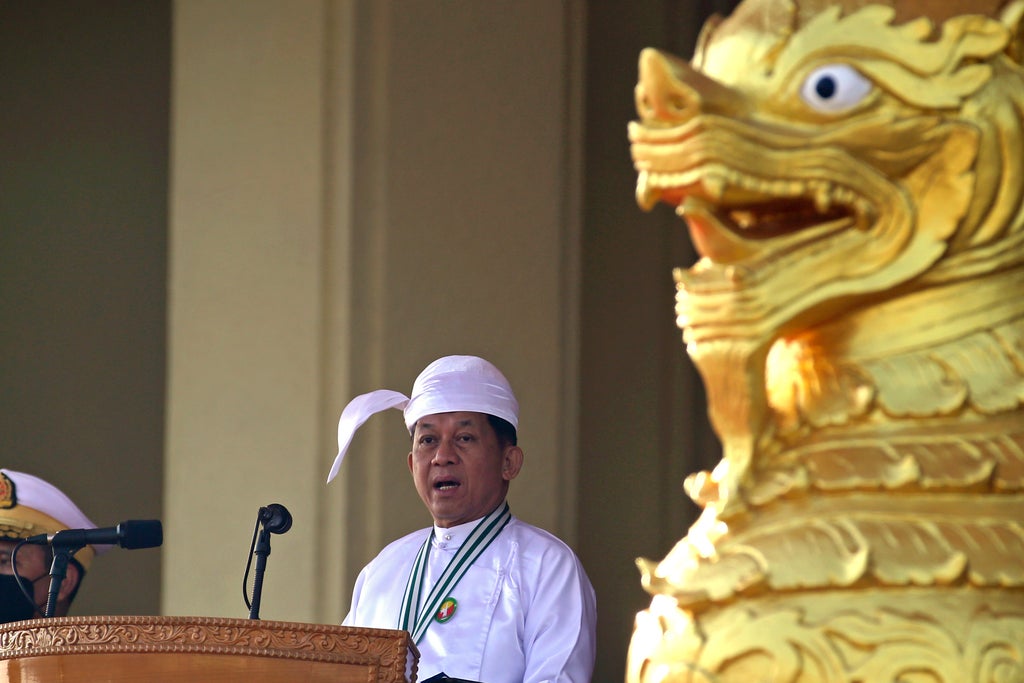 The head of Myanmar’s military government appealed Saturday for national unity among the country’s restive ethnic minorities as he presided over a parade marking the 75th anniversary of a historic agreement that sought but failed to ensure harmony.

The armed forces and government ministries took part in the parade in the capital Naypyitaw that also included dozens of elaborate colorful floats representing the country’s various regions where the minorities predominantly dwell.

However, Myanmar has been plagued for decades by nearly constant conflict as the minorities have sought the autonomy they believe they were promised in the areas where they live, mostly along the country’s borders.

Periods of armed conflict have alternated with fragile cease-fire agreements, as civilian and military governments alike, dominated by the Burman majority, have been unwilling to implement a political agreement acceptable to the various minority groups.

The army’s seizure of power last year has added to the instability due to an insurgency that has arisen in opposition to military rule. Protesters initially staged peaceful demonstrations but armed resistance grew after they were put down with lethal force. About 1,500 civilians have been killed but the government has been unable to suppress opposition. Some UN experts have characterized the conflict as civil war.

Complicating the situation are alliances that opponents of military rule have formed with some of the minorities, who maintain guerrilla forces with decades of combat experience.

“All ethnic national brethren understand well that as the internal armed conflicts triggered by disunity for various reasons soon after regaining the independence cannot be totally solved up to now and the national unity and the Union peace cannot be firmly restored, the country sees delay of the development process,” Min Aung Hlaing said in a prepared statement released Saturday.

His government is trying to revive talks with the ethnic minorities, inviting them for a new round coinciding with Saturday’s anniversary.

Opponents of military rule had urged a virtual boycott of the anniversary ceremony, which they described as wasteful, especially with the country still facing a significant challenge from the coronavirus pandemic.

They urged people not to turn on their televisions while the parade was being broadcast and not to circulate photos of the ceremony on social media, claiming it would only serve to boost Min Aung Hlaing’s image.

At the same time, the armed wing of the resistance carried on with what has become a persistent campaign of urban guerrilla actions, complementing resistance in the countryside.

Various groups claimed on social media to have carried out bombings in Naypyitaw and Yangon, the country’s biggest city.

A group in Naypyitaw said it set off bombs at a police station and a market on Friday night, just hours before the ceremony began. Groups in Yangon claimed to have attacked a military vehicle and bombed a generator for the military-owned mobile phone network operator Mytel on Saturday morning.

The claims could not immediately be confirmed but such actions have become a near-daily occurrence and are often reported in the military’s statistics.

In apparent anticipation of trouble, the authorities ordered mobile phone operators to cut off mobile data services for most of Saturday, leaving only Wi-Fi available.

In a customary gesture for national holidays, Min Aung Hlaing also announced an amnesty for more than 860 prisoners, state-run newspapers reported. As of Friday, the government was keeping 9,087 people under detention, according to the Assistance Association for Political Prisoners. It was unclear how many political details were among those being freed Saturday.