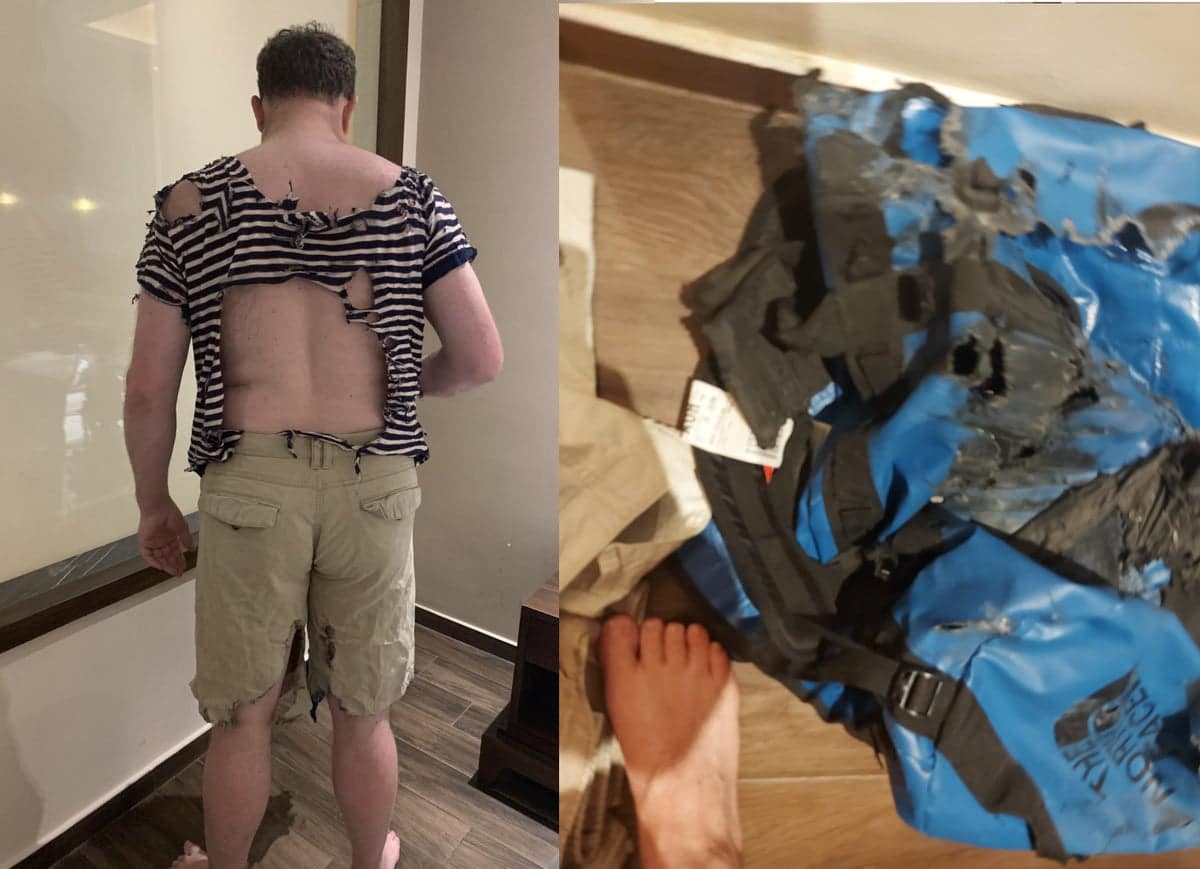 An Etihad passenger has complained about the state of her husband’s luggage after a flight with the Abu Dhabi-based airline, saying his shredded clothes made him “look like a pirate”.

Karen Nowland posted photos of her husband’s threadbare attire and a blue canvas holdall from The North Face, which she says had arrived damaged after an Etihad flight from Manchester to Colombo, Sri Lanka.

“Hey @etihad Look what happened to my husband’s bag somewhere between Manchester and Colombo!” she wrote on Twitter on Tuesday.

“Why are you ignoring our emails to @EtihadHelp? My husband looks like a pirate. Not the tropical holiday look he had in mind.”

The photos show a pile of shredded men’s clothing, along with her husband dressed up in some of them: a comically stringy portion of blue T-shirt, an almost backless striped T-shirt and khaki shorts with the hems damaged and hanging with thread.

“Flight from Manchester. It arrived on carousel in Colombo in a plastic bag.

“What on earth happened? @etihad aren’t replying to our emails. Not sure the backless look suits my husband.”

As shocked followers responded to the comical “pirate” images of her husband wearing ragged and ripped, striped T-shirts and shorts, Ms Nowland said she had received a call from an Etihad representative at Colombo Airport on Tuesday.

She added: “But we’re not sure she has the authority to actually do anything other than apologise. It’s very frustrating!”

A spokesperson for Etihad Airways said: “We were unaware of this case, but reached out directly to the guest to provide full support as soon as we were alerted.

“Unfortunately the guest was provided incorrect contact information to raise a baggage claim, but now we are aware the matter will be quickly resolved. Guests can make a baggage claim quickly and easily online at https://www.etihad.com/en-ae/help/delayed-baggage.

“We are conducting a full investigation into the cause of the damage to the guest’s baggage, as well as our partner’s guest communication process to ensure this doesn’t happen again. We sincerely apologize for the inconvenience our guest experienced.”

Thousands of passengers have encountered problems with their luggage in recent weeks, with customers at Heathrow Airport reporting a “sea of ​​luggage” in some terminals, following a backlog that led to hours-long waits at baggage claim.

Some Heathrow passengers claimed their bags had been stranded at Heathrow for six, nine or even 10 days; meanwhile customers at Manchester, Bristol, Birmingham, Glasgow, and Gatwick airports have had to wait longer than usual for their luggage.

The delays are understood to be due to a shortage of ground staff, and problems recruiting new staff following airports “scaling down” during the pandemic.

In one case this spring, a Tui pilot was seen leaving the cockpit to go and load customers’ baggage himself so the flight could take off.