Skip to content
Home News Mum begged landlord to repair fireplace before it fell on girl, 6, now in coma


Families living in dangerous homes today back a Sunday Mirror demand for curbs on death-trap rentals.

We are calling for action after finding properties crumbling around terrified tenants – including one horrifying case where a falling fireplace put a seven-year-old girl in a coma.

Other tenants complain of walls and ceilings coated in thick, black mold – and some with broken fire alarm systems.

The Mirror is demanding the owners of 4.5million private rented homes in England be forced to join a national register to show their properties are safe.

Other home nations have a register but tenants in England have no way of checking whether their place is safe before they move in.

Backing our Safe as Houses campaign is the family of Alexa-Leigh Blakemore, seven – left brain damaged when a fireplace collapsed on her.

Mum-of-three Elle – who says she asked her Liverpool landlord to fix the fireplace – tells us: “We thought Alexa-Leigh was dead. There was blood coming out of her ears, her nose, her mouth.

“We would definitely support the introduction of a national landlord register. I am all up for landlords having the right checks to make sure their properties are well maintained and safe. It can be a life-or-death situation.”

Alexa-Leigh Blakemore, six, was injured when a fireplace fell on top of her
(

Alexa-Leigh’s family is not alone. Renters’ union Acorn surveyed 500 private tenants and 91.8% had lived with a hazard in their home in the last five years.

Some experienced structural issues. Others had fire risks, asbestos and damp. More than half did not raise issues for fear of being evicted – as private landlords can turf tenants out without giving a reason.

Some 18.2% had been threatened with a no-fault eviction when raising issues and 11.2% were served with a notice to leave. And half had experienced harassment or intimidation by a landlord.

Many renters are in the private sector due to a lack of social housing.

The private rented sector, meanwhile, has doubled in size over the last 20 years and is home to 11 million, including three million children.

If regulations are tightened, landlords could be expected to provide they are fit and proper. This is open to debate but it could mean those with certain criminal convictions, like fraud, being barred from renting out homes.

Katie Weston, 25, only discovered her landlord in Sunderland had a fraud conviction when he tried to keep her deposit. She said: “He became aggressive when I challenged him. I wondered if, given his past, he’d tried this before.

Five months on and Alexa-Leigh is still in hospital
(

A register could also inform tenants if a landlord had a history of failing to protect deposits, charging excessive rent or carrying out illegal evictions.

Elle was worried about the fireplace and says she offered to pay half of the repair bill, but nothing was done.

The family is now taking civil action against their former landlord, while Merseyside police are investigating.

Gordon Cartwright, partner in the catastrophic injury team at JMW Solicitors, claimed: “The family reported a number of issues to the landlord, which were not resolved prior to the accident.”

Five months on, Alexa-Leigh is still in hospital and shattered Elle, 27, and partner Kieran, 33, are having sessions with a trauma psychologist.

Their daughter spent six weeks in a coma, had to learn to walk and talk again and might never have children as the part of her brain controlling hormones has been impaired.

The accident still gives Elle nightmares. She says: “I was in the bath and I heard a bang. Kieran screamed, ‘She’s dead!’ Alexa-Leigh was fitting on the floor. Kieran ran into the street to scream for help. She had her eyes open and I couldn’t find a pulse. The ambulance took two-and-a-half minutes – she’d lost two liters of blood by then.”

The family was told to prepare for the worst but Alexa-Leigh defied expectations and woke up from her coma in late October.

Elle added: “The progress is amazing. It started with her responding to a pinch on her left hand of her. Then, we started getting smiles from her.

“She was non-verbal for three months – but her voice came back. She doesn’t talk like a normal seven-year-old but her speech is coming back better every day.

“She has her sight, her hearing is returning and she’s learning to walk with a frame. But this could have been prevented if the house was safe. I still have flashbacks and nightmares.”

John Lowry, director and head of housing repair at CEL Solicitors, said: “There are a lot of rogue landlords. Properties can be really dangerous. This can have serious health impacts.”

Osama Bhutta, director of campaigns at Shelter, said: “Every day, we get calls from renters in damp and dangerous conditions or facing landlord harassment. It’s appalling there’s no way for them to check the property is up to scratch and the landlord is a decent one before it’s too late.

“We need to professionalize the private rented sector so tenants can sleep soundly at night. 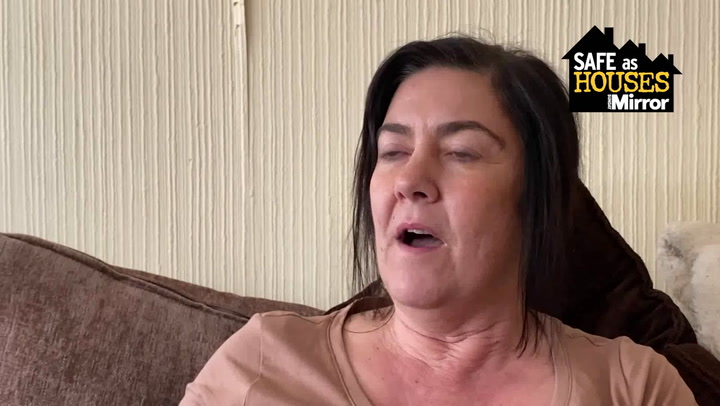 “The Government must deliver on its promise to introduce a Renters’ Reform Bill that includes a National Landlord Register.”

The Department of Leveling Up, Housing and Communities, said it would “explore proposals for a national register” and consult on “legally binding new standards”.

A spokesman added: “Councils should use powers we’ve given them to crack down on rogue landlords, including fines of up to £30,000 and banning those who rent out unsafe homes.”

Hit by door and fear of ceiling fall

Shaken Joanne Wagstaff was left with horribly bruised hands when a wardrobe door at her rental fell off and landed on her.

Former hairdresser Joanne, 54, and daughter Chloe Silcock, 27, say the home was dirty when they moved in, suffers badly from damp, and a crack in the conservatory ceiling leaves them fearing it will collapse.

They say the floor in that room has caved in, the carbon monoxide detector doesn’t work and there have been mice and ant infestations.

The pair pay £1,200 a month after viewing the furnished two-bedroom property in Bournemouth, Dorset, on Zoom due to lockdown restrictions.

They began renting in June 2020 but make-up artist Chloe was in tears because of the grime.

Joanne’s hand after the wardrobe door fell off its hinge
(

Then, last October, Joanne was whacked by the wardrobe door. She had to go to A&E and is still in pain.

Joanne, who is considering legal action, said: “We shouldn’t have to live like this.”

Support worker Kevin Stopford found his brother Dave dead from pneumonia in his damp and moldy flat – and fears the state of the property may have contributed.

Dave, 57, couldn’t work due to mental health issues, relied on housing benefit and was paying around £400 a month for the one-bedroom property in Westonsuper-Mare, Somerset.

Kevin, 62, was horrified to discover the property was coated in black mold.

The fire alarm system didn’t work and the stairs were unstable.

The landlord was in a voluntary accreditation scheme called the National Landlord Code of Excellence – but was suspended for a year after the family complained.

Tearful Kevin said: “When we went to clear out Dave’s flat, the sight was just unbelievable, from the smell of damp to the black mold in every room. My sister burst into tears.

“He didn’t want anyone to come to his flat and we couldn’t believe he’d died alone in those conditions.

“I just want to channel my anger into helping other people. I want to get the rules changed so tenants can feel confident things will get fixed. It’s a basic human right.”

■ The complaints system overhauled so tenants’ issues have to be resolved within a set period of time.

■ A ban on so-called “no-fault” evictions.

■ A national landlord register to ensure safety standards are met.

Flat was on sale in London for a bargain £50,000 but measures just 7 meters

See also  What is stagflation and why can Europe reach it?