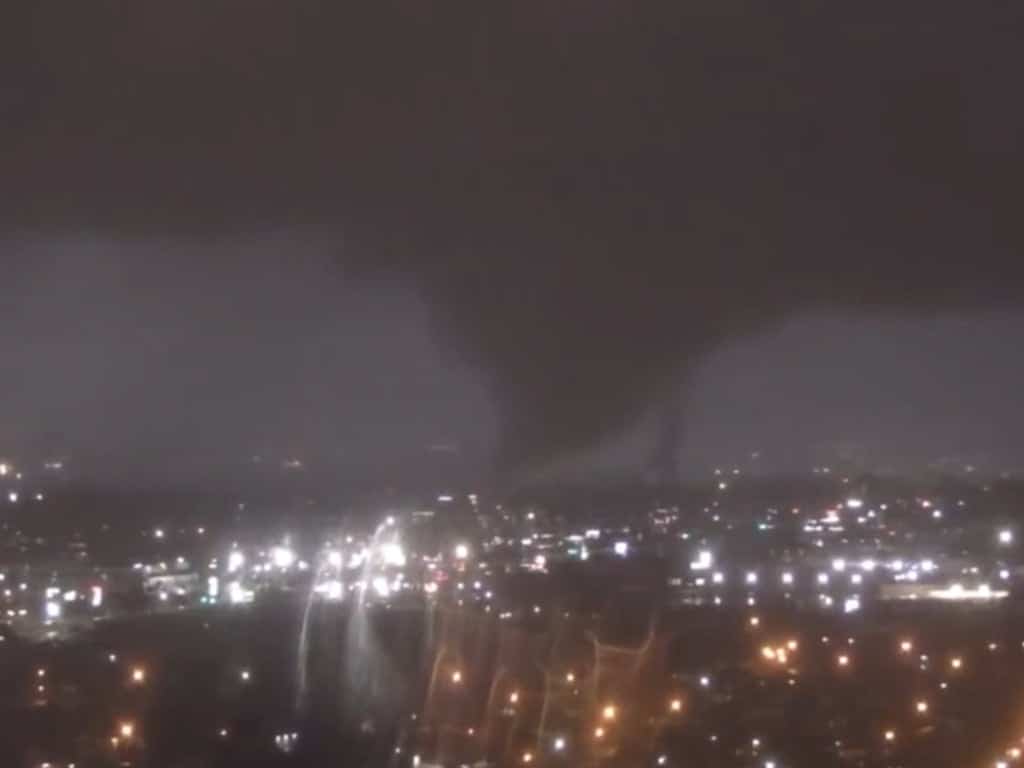 At least one person has been killed after a multi-vortex tornado touched down in New Orleans on Tuesday night, ripping roofs off homes, downing power lines and flipping cars.

Harrowing footage showed the gigantic funnel scything across the city sky, part of a “volatile” storm system that has already caused widespread damage across the American South.

the Associated Press reported that one person was killed and multiple people are injured, while the New Orleans’ parish of St Bernard was left without power.

“There are houses that are missing,” New Orleans Sheriff James Pohlmann told The New York Times.

“One landed in the middle of the street, and there was somebody trapped in that house.” The individual was later rescued and taken to hospital, the Times added.

The tornado appeared to start in a suburb and then move east across the Mississippi River into the Lower Ninth Ward of New Orleans and parts of St Bernard Parish, both of which were badly damaged by Hurricane Katrina in 2005, before moving northeast.

Stacey Mancuso’s family had just completed repairs to their home in the suburb of Arabi after Ida ripped off the roof and caused extensive water damage.

On Tuesday, the tornado tore through their street. She huddled in the laundry room with her husband de ella, two children, aged 16 and 11, and dogs as part of their new roof was lifted away by the wind.

“We’re alive. That’s what I can say at this point. We still have four walls and part of a roof. I consider myself lucky,” Ms Mancuso told the Associated Press. Still, the twister was the third time they’ve had major weather damage since Katrina.

In Arabi, there was a strong smell of natural gas in the air as residents and rescue personnel stood in the street and surveyed the damage. Some houses were destroyed while pieces of debris hung from electrical wires and trees.

An aluminum fishing boat in front of one house was bent into the shape of a C with the motor across the street. Power poles were down and leaning over, forcing emergency workers to walk slowly through darkened neighborhoods checking for damage.

Michelle Malasovich lives in Arabi. Initially she had been worried about family that lives in areas north of Louisiana that were also getting hit by bad weather. She was texting with her family de ella there when, she said, “All of a sudden the lights started flickering.”

Her husband was out on the porch and saw the tornado coming.

“It just kept getting louder and louder,” Ms Malasovich said. After it passed, they came out to survey the damage. “Our neighbor’s house is in the middle of the street right now.”

Ms Malasovich’s house fared relatively well, she said. Some columns were blown off the porch and the windows of her Jeep were blown out.

Down the street a house was severely damaged, and parked vehicles had been moved around by the winds.

New Orleans Mayor LaToya Cantrell tweeted late on Tuesday that there were no reports of casualties or significant damage to the city and that the power utility was working to restore electricity to the 8,000 customers impacted.

About 13,000 homes and businesses were reportedly without power in the three parishes around New Orleans after the storm.

While people in the metropolitan region are used to dealing with severe weather such as hurricanes or heavy rains, it’s rare that a tornado moves through the city. A 2017 tornado caused widespread damage when it touched down in the eastern part of the city.

Ahead of the severe weather, many schools closed early or canceled after-school activities in parts of Louisiana and Mississippi. Shelters opened for residents who needed a place to stay while the storms traveled through.

Louisiana’s federal and state authorities reminded thousands of hurricane survivors living in government-provided mobile homes and recreational vehicle trailers to have an evacuation plan because the structures might not withstand the expected weather. More than 8,000 households live in such temporary quarters, officials said.

After leaving the New Orleans area, the system dumped heavy rain, downed trees and prompted multiple tornado warnings as it moved into Alabama on Tuesday evening. The roofs of several homes were damaged in Toxey, Alabama, after a storm preceded by tornado warnings passed through the area, the National Weather Service tweeted.

About 3.1 million people in Alabama, Florida, Louisiana, and Missouri remained under storm risk warnings from the US National Weather Service (NWS) on Tuesday night.

“Severe thunderstorms will be capable of producing tornadoes, wind damage and isolated large hail this evening across parts of the central Gulf Coast states,” the agency said.

“The greatest tornado threat will be near the axis of the low-level jet in southwest Alabama early this evening, where a significant tornado will be possible.”

Twisters are tricky to study partly because they are relatively short-lived, and have tended to appear in less densely-populated areas. For decades, before cameraphones, data largely relied on people spotting tornadoes and calling them into the National Weather Service.

But the body of research is growing. A study in 2014 from the National Severe Storms Laboratory found that in the past 50 years, clusters of tornadoes have become more common. A separate 2018 study found that over the past four decades, “Tornado Alley” appeared to be shifting to the east, away from typical paths through Kansas and Oklahoma.

Recent leaps forward in “climate attribution science” have allowed stronger connections between the climate crisis and extreme weather events to be made more quickly.

While the role of climate change in tornadoes is not fully understood, a number of studies have found that a warmer world is more likely to produce conditions for severe thunderstorms which can spawn tornadoes.

Texas officials said one person had been killed and 10 injured when other tornadoes hit that state on Monday. The overall extent of the damage and the number of people affected in New Orleans was not yet clear on Tuesday night.

Associated Press contributed to this report