Tom Rogic’s first-half double saw Celtic win 4-0 at Motherwell as Ange Postecoglou’s side maintained their one-point lead over Rangers at the top of the Scottish Premiership. 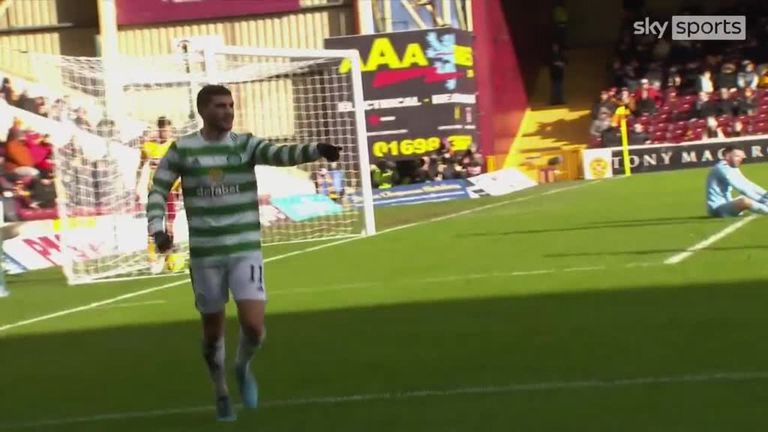 The in-form Liel Abada, who starred in Celtic’s 3-0 destruction of Rangers on Wednesday, opened the scoring after 28 minutes with a simple finish before the returning Rogic took over. 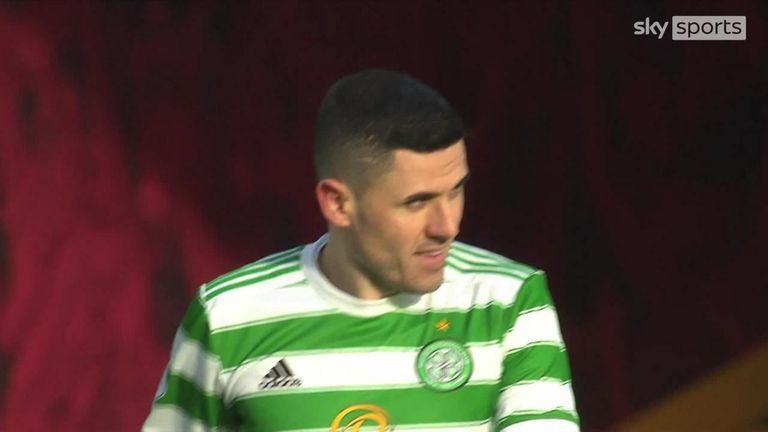 The Australia international missed the Old Firm win while on international duty, but he made up for that with two goals before half-time to put the visitors in total control.

Man of the match: Tom Rogic 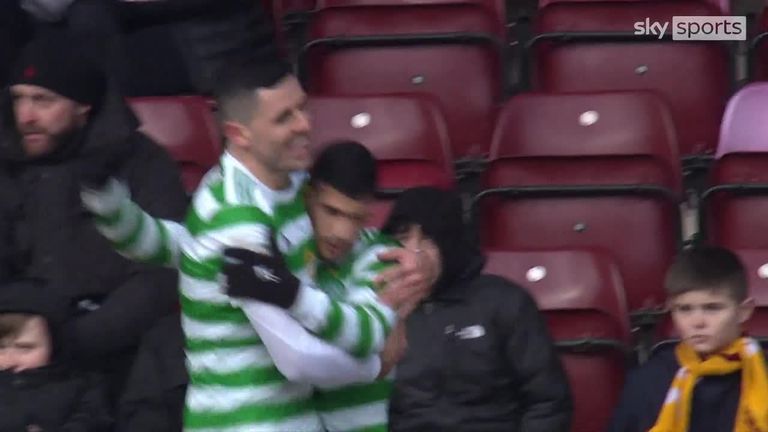 Rogic gets his second

Rogic’s first, three minutes after the opener, was a beauty as the midfielder curled one into the top left corner from 25 yards, before a far simpler finish to make it 3-0 on the stroke of half-time.

The hosts made one change from the team that drew late on at St Mirren on Tuesday, with Dean Cornelius replacing on-loan Celtic midfielder Liam Shaw, who could not face his parent club.

As for the visitors, Ange Postecoglou made three alterations to the side that destroyed Rangers 3-0 on Wednesday. Australia international midfielder Tom Rogic made an immediate return to the starting lineup having been away on international duty, while Anthony Ralston and Daizen Maeda were also both back. And that meant Matt O’Riley, Josip Juranovic and Jota all dropped to the bench.

Daizen Maeda’s deflected effort rounded off the scoring with 19 minutes to go as Celtic – who have now won six consecutive league games and gone 23 domestic matches unbeaten – extended their lead over the champions to four points ahead of their home clash with Hearts later on Sunday .

“They topped their performance from Wednesday night. They were excellent there from start to finish.

“Celtic never let off, they kept going for the 90 minutes. That’ll be worrying [for Rangers] because they’re at a stage now where it’s going to be difficult to stop them.”

“This is as good as I’ve seen Celtic play in a long, long time.

“I think teams in the league will be terrified of Celtic, particularly going to Parkhead. They’ll be thinking, ‘Let’s take a 2-0 loss before this even starts’, that’s how good I think they are.

“I think Celtic look unstoppable for me.” 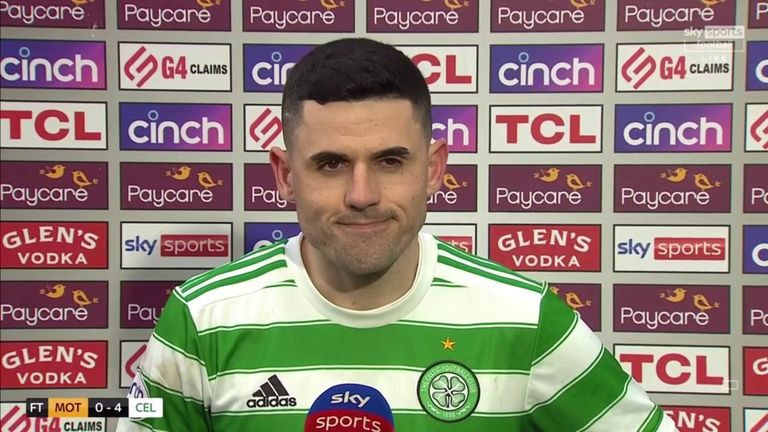 Reaction from man of the match Tom Rogic, after his two goals helped Celtic to a 4-0 win at Motherwell.

Man of the match Tom Rogic told Sky Sports: “I think it was important to back up that result [against Rangers].

“We’ve been stringing some consistency together for a good few months now. We’ve been playing well and people are now starting to take a bit more notice.

“This is a familiar position [being top] for a lot of us and it’s about keeping working hard, focus on the next game and don’t get too carried away with it.”

Asked about boss Ange Postecoglou’s impact on his good form, the Australian said: “He’s fantastic. Obviously I know him well as I had him for four or five years with the national team.

“He’s been brilliant and I know the quality of manager he is.

“It’s nice people this side of the world are taking notice and he’s starting to get recognition. He’s doing a hell of a job.”

Man of the Match-Tom Rogic

I’m not quite sure what Motherwell have done to annoy Rogic, who turned in a man-of-the-match display to help Celtic breeze past the home team 4-0 at Fir Park on Sunday as the Australia international once again tormented Graham Alexander’s men.

The skilful midfielder ran the show from start to finish on his return to Celtic’s lineup after being away with his country on international duty, netting twice before the break to take his tally of goals against Motherwell to a career-high seven.

Rogic’s first was a stunning effort from a distance, with his second a far simpler finish as the 29-year-old scored his first-ever double in the Scottish Premiership.

And you get the feeling Rogic’s presence in the Celtic team between now and the end of the season will be pivotal to his side becoming champions.

What the managers said…

Motherwell Boss Graham Alexander: “It’s difficult on all levels but first and foremost they are a quality team who work their socks off and have a great humility about themselves and how they go about things.

“It’s not just about what they do on the ball, it’s how hard they make it for you when you’ve got the ball.

“It’s a difficult one because you try to get that first goal to give yourself something to play for, but if they get it, it’s extremely difficult.

“I thought we were growing into the game but they have the quality to hit you on the counter. We could have defended the first goal a lot better but we also have to acknowledge they are a fantastic team with a lot of good players.

“They just beat a team like that on Wednesday who have lost eleven in 65-70 games. So they can do it against anyone.”

Celtic boss Ange Postecoglou: “I was pleased with that, especially after Wednesday night.

“The players invested a lot emotionally and physically and credit to the players, I thought it was first rate.

“We are human beings. It’s not just like I say ‘we focus on the next one’ and they can put it to bed. It takes its toll.

“I watched training on Saturday and, even the guys who didn’t play, the training was relentless and really competitive. So I kind of knew we would be fine.

“I do enjoy it because that’s how I want my teams to play.

“I’d be frustrated if we were winning and not playing the football I want.

“My role is to manage on the day and help the team where I can. But I do get a joy because I know it will give our support that joy.

“I think just instinctively players enjoy playing that way as well. You see at 4-0 that they’re trying to get a fifth, a sixth, they’re not stopping even when they haven’t got the ball. They’re still chasing things down.

“I think everyone enjoyed it. It’s not easy to get to that place, it requires a lot of hard work.

“But when you get to that place it kind of feeds into itself because people want more of it.” 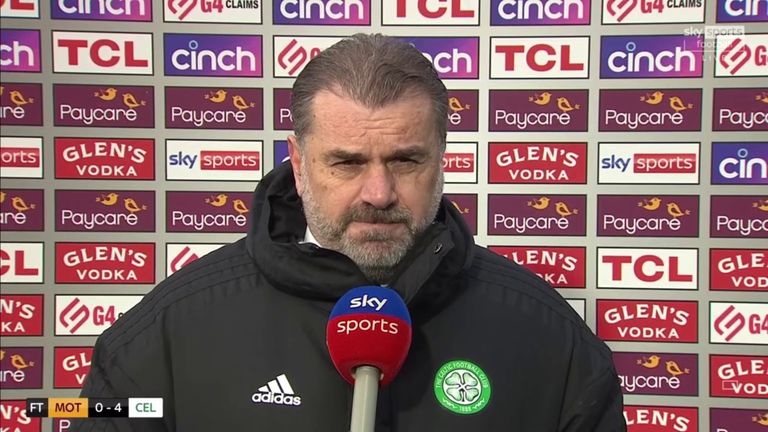 Ange Postecoglou was delighted his side backed up their Old Firm victory with another good performance in their 4-0 win at Motherwell..

Motherwell travel to Dundee United, while Celtic visit Aberdeen, with both Scottish Premiership games kicking off at 7.45pm on Wednesday.