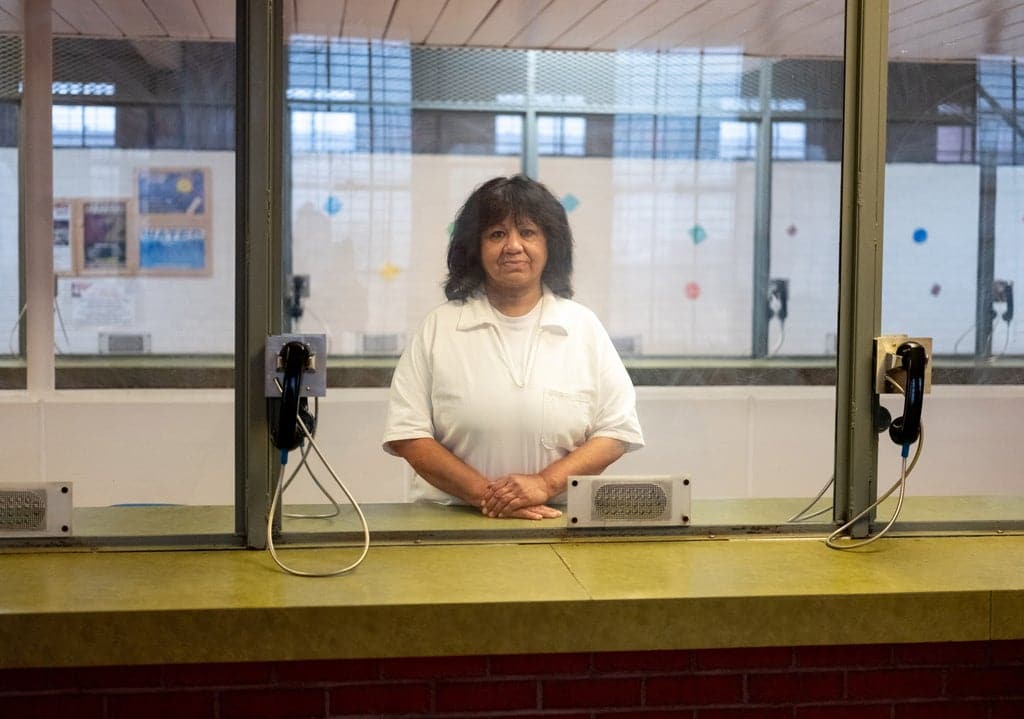 A mother on death row in Texas for the murder of her daughter that she says she didn’t commit has asked Governor Greg Abbott to grant her clemency as her execution date looms.

Melissa Lucio was sentenced to death in 2008 after she was convicted of killing her two-year-old child Mariah one year earlier.

In February 2007, Mariah died from injuries which prosecutors claimed were caused by Lucio abusing her daughter.

Lucio, now 53, has always maintained her innocence and said that her daughter’s injuries were caused by a fall down the stairs two days earlier while the family was moving home.

The mother of 14, who is the first and only Hispanic woman on death row in Texas, has spent the last 14 years awaiting execution for a crime she says she didn’t commit.

In just over one month she will be put to death, after the state of Texas set an execution date of 27 April.

Attorneys for Lucio submitted an application for clemency to Republican Governor Abbott and the Texas Board of Pardons and Paroles on Tuesday, asking for her death sentence to be commuted to a lesser sentence.

Alternatively, they are asking for a 120-day reprieve from execution so that more evidence can be gathered to prove she was wrongly convicted over her daughter’s accidental death.

Professor Sandra Babcock, one of Lucio’s attorneys and the director of the Cornell Center on the Death Penalty Worldwide, said in a press conference on Tuesday that Lucio’s death sentence “shows that any innocent woman can be executed” in the state.

“Mariah’s death was a tragedy, not a murder,” she said.

The attorneys said that the “only evidence” to convict Lucio was an unreliable “confession” gained during a five-hour interrogation with armed, male police officers while she was pregnant with twins.

During the interrogation, Lucio asserted her innocence more than 100 times to the officers, according to the clemency application.

But, because of her history as a victim of sexual abuse and domestic violence and the actions of the male officers, she was vulnerable to their “coercion”, they said.

Professor Babcock said the officers “threatened her, berated her parenting… repeatedly showed her pictures of her child who was deceased” and “extensively manipulated” her until she relented to their demands.

During the five-hour interrogation, Lucio ended up admitting that she sometimes spanked Mariah – an admission prosecutors claimed was a confession for her murder.

Social work records show Lucio had no history of abusing her children.

Meanwhile, two key witnesses for the defense had been blocked from testifying at her trial that she gave a false confession to male authority figures due to her history of abuse and low IQ.

In the clemency application, Lucio’s legal team also said her conviction was based on “unscientific, false evidence that misled the jury into believing that Mariah must have been killed by physical abuse, when the evidence is actually consistent with a conclusion that Mariah died from medical complications after a fall”.

The application pointed to new evidence that the jury did not hear, including reviews from two false confession experts and testimony from medical experts who say Mariah’s injuries were likely to be caused by a fall or an infection.

Several forensic experts, experts on false confessions, anti-domestic violence groups, religious groups and even five jurors who convicted Lucio at her trial have also joined in calls for the 53-year-old to be granted clemency.

The jurors – four on the panel and one alternate – have filed declarations saying they are concerned about evidence that was withheld from them at her trial and that they support relief for the 53-year-old.

Lucio’s other children have also filed letters urging the state of Texas to grant their mother clemency.

Her attorneys said that Lucio is “holding up” and is “primarily worried about her children, her sisters, mother, her brother” with her execution date just 36 days away.

“They have lived for 14 years with this threat hanging over them after already losing Mariah to a tragic accident,” said Professor Babcock.

The application for clemency comes after years of fighting to prove Lucio’s innocence.

In 2019, she was granted a new trial after an appeals court agreed that her rights had been violated at her trial.

But this was swiftly undone when the state of Texas filed a petition and a court sided with it.

Last year, the US Supreme Court then denied a request to hear Lucio’s case, paving the way for Texas to set her execution date.

The Independent and the non-profit Responsible Business Initiative for Justice (RBIJ) have launched a joint campaign calling for an end to death penalty in the US. The RBIJ has attracted more than 150 well-known signatories to their Business Leaders Declaration Against the Death Penalty – with The Independent as the latest on the list. We join high-profile executives like Ariana Huffington, Facebook’s Sheryl Sandberg, and Virgin Group founder Sir Richard Branson as part of this initiative and are making a pledge to highlight the injustices of the death penalty in our coverage.