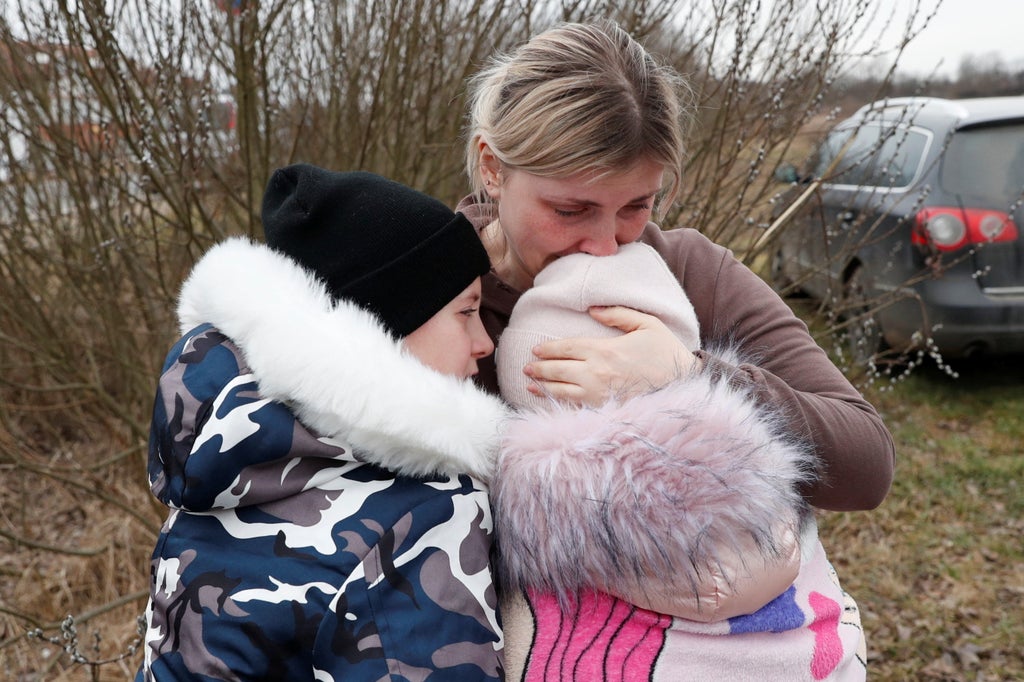 Moving images from the Ukraine border show the moment a woman brings the children of a stranger to safety in Hungary as they fled the Russian invasion.

Nataliya Ableyeva made the crossing on Saturday, bringing with her the son and daughter of a 38-year-old man from her home town of Kamianets-Podilskyi.

He had asked Ms Ableyeva to take his children with her after border guards blocked him from leaving the country.

Ukraine has banned all Ukrainian men between the ages of 18 and 60 from leaving, so they can fight for their country.

It came as The Independent launched a campaign calling on the UK government to urgently set up a resettle scheme for Ukrainians wanting to escape the war.

Speaking of their journey, 58-year-old old Ms Ableyeva, the arms of the young boy she had known for just a few hours around her neck, said: “Their father simply handed over the two kids to me, and trusted me, giving me their passports to bring them over.”

The children’s Ukrainian mother was on her way from Italy to meet them and take them to safety, the father said. He gave Ms Ableyeva her mother’s mobile number, and said goodbye to her children, wrapped up against the cold in thick jackets and hats.

Ms Ableyeva had left her own two grown-up children behind in Ukraine. One a policeman, the other a nurse, she neither could leave Ukraine under the mobilization decree.

She took the two small children by the hand and together they crossed the border.

On the Hungarian side at Beregsurany, they waited, sitting on a bench near a tent set up for the steady flow of refugees streaming over the frontier. The little boy was crying when his mobile phone rang.

It was his mother, she was nearly at the border post.

When 33-year-old Anna Semyuk arrived, she hugged her son and went to her daughter, lying exhausted in the back of a car and wrapped in a pink blanket.

Then she thanked Ms Ableyeva. Standing in the cold on the scrubby ground, two women embraced for several minutes and started to cry.

“All I can say to my kids now, is that everything will be alright,” said Ms Semyuk. “In one or two weeks, and we will go home.”

The United Nations High Commissioner for Refugees has updated its estimate on the number of refugees that have left Ukraine since the war broke out on Thursday, saying the total stands at 368,000.

It said in a tweet: “Ukraine refugee numbers have just been refreshed – these are based on data made available by national authorities. The current total is now 368,000 and continues to rise.”

Ukrainians are fleeing into neighboring Poland, Hungary, Romania and Slovakia.

Charities called on the UK government to create a safe and legal route for Ukrainians escaping the horrors of war – and put a halt to new legislation that criminalises asylum seekers.

Marian Kemple Hardy, head of campaigns at Refugee Action, said the charity “backed our timely campaign” and urged the UK government to commit to “a properly funded resettlement scheme that can take 10,000 refugees from worldwide conflicts a year”, which could “immediately be opened to fleeing Ukrainians”.

The current advice from the UK government to Ukrainians – to seek sanctuary in the country they first enter – was criticized by charities as a way of absolving Britain of responsibility, and stands in stark contrast to the actions of many other EU countries, who have opened their doors to refugees, and countries such as Portugal and Ireland, who have waived visa requirements.