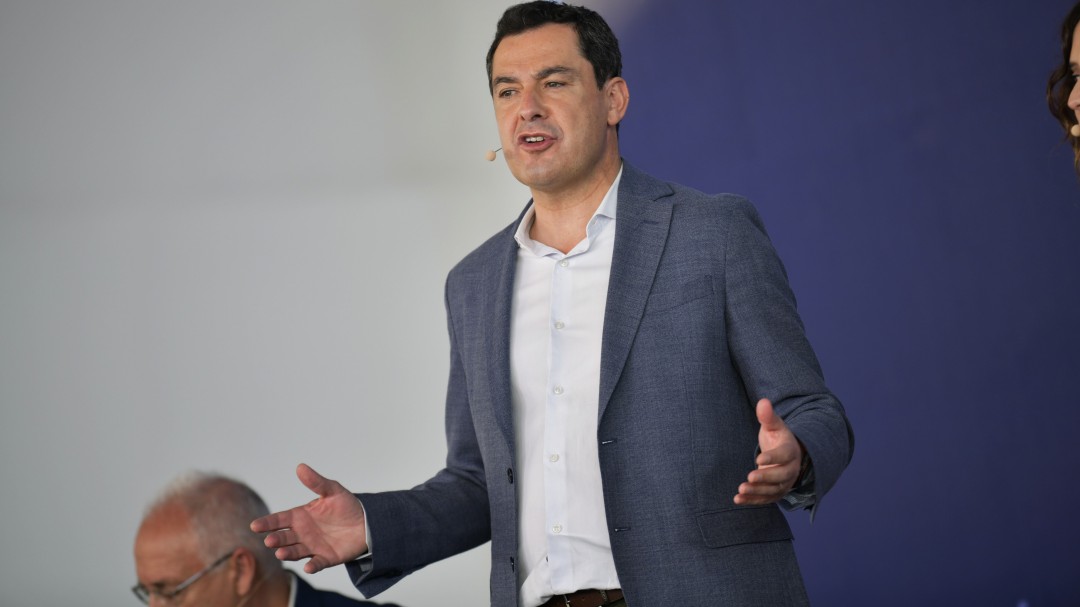 The Andalusian president, Juanma Moreno, has appealed to the economic and social sectors and to the political parties about the need for dialogue and consensus, and after defending the stability of this region, he has said that his wish is for the elections to be held “as late as possible”.

In his Christmas message to Andalusians from the Taberna Granados hotel establishment in Granada, in recognition of one of the economic sectors that has suffered the most virulence of the effects of the pandemic, Moreno has addressed the health situation and economic recovery, in addition to defend the political stability that Andalusia has enjoyed in the last three years and to thank the “loyalty” of its government partner, Ciudadanos.

“As you know, 2022 will be an electoral year in Andalusia. We still do not know the date, but my wish is for it to be as late as possible, because every day is important in the economic and social recovery,” he stressed before ensuring that his government did not it will be “idly” for the time left until the regional elections because there are “many challenges ahead”.

“I never tire of claiming the spirit of the Transition, that of the great agreements, as valid four decades ago as now,” he emphasized, while encouraging Andalusians to demand that politicians “make a greater effort to reach an agreement”.

In his third Christmas message, the Andalusian president wanted to convey “trust and hope” despite the “suffering” that the coronavirus has continued to cause this year that ends, which has claimed more than 6,300 lives in Andalusia.

“Let us be prudent but do not deprive ourselves of a feeling of pride; since the pandemic began, Andalusians have given an example of conscience,” he stressed. “We have to make an effort more, we have to maintain and increase the rate of vaccination of children and the third dose for adults of all ages,” he said, after which he recalled that a few days ago he asked the Government of Spain will make an “extra effort” together to accelerate the rate of vaccination.

For Moreno, “common sense” is a “fundamental weapon” against the pandemic, because “if we continue to be responsible, Andalusia will reach recovery much earlier and much better.” In his speech, he did not want to avoid the situation facing the public health system, which had never been subjected to “such great tension”, although hospitals are “resisting the sixth wave well.”

Thus, he has ensured that the level of occupation in the ward and in the ICU remains, for the moment, at levels that are “acceptable”, since out of every hundred infections only two people enter the hospital compared to the ten who entered a year ago.

He also highlighted that in less than three years six new hospitals and five new health centers have been opened in Andalusia and, although he has admitted that it is not enough, he has argued that the Andalusian health system is today “better than it was in the past” , at the same time that he has promised to do everything in his power “so that in the future our health is even better.”

In addition to recognizing the efforts of the health workers, Moreno has praised the work of farmers and fishermen, security forces, transporters and teachers, among others, and highlighted that Andalusia has made available to the groups most affected by the pandemic more than 1.4 billion euros to help them move forward.

“I know that it is not always possible to solve all the demands, but rest assured that the Government that I preside over does everything possible to improve public services every day with the resources we have,” he stressed.

During his speech, he also took the opportunity to demand from the Government of the nation a new covid fund for 2022 and “fair” financing for Andalusia, which must receive from the State “the same money as the rest of the Spanish.”
“Andalusia will always be attentive so that no claim from anyone leads to privileges for a few,” he warned.

Likewise, he has referred to sexist violence after recalling that eight women victims of this scourge have died in Andalusia in 2021, and has expressed his “firm” commitment to fight against it “and against all types of physical and psychological violence that occur. they produce in our society. “

Finally, he has expressed his concern about the effects of climate change, which are already “real” in Andalusia, and has given as an example the fire in Sierra Bermeja, one of the “worst” in the history of the community, so ” we are going to continue developing policies to try to stop climate change within what we have called our Green Revolution, “he said.

Finally, the Andalusian president has asked for “confidence” in his government, promising “maximum commitment” and also individual confidence and in Andalusia as a people, as well as “hope, encouragement and optimism” because the recovery after the pandemic “is slow, but it’s constant”.