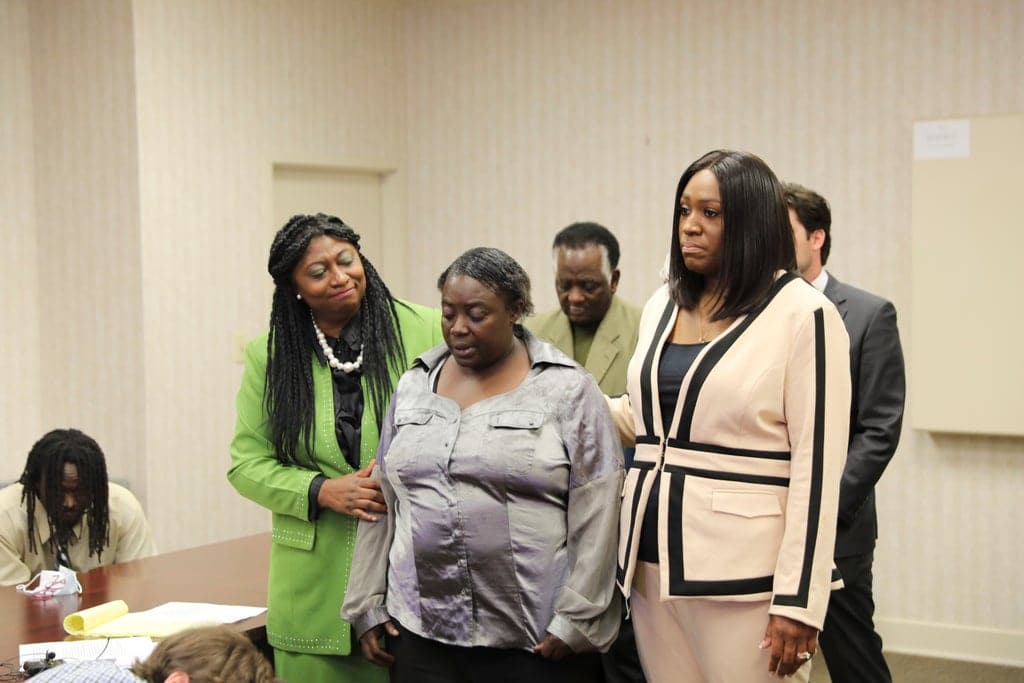 A sheriff’s department in South Carolina released more body camera footage Wednesday of the fatal shooting of a man who lunged at officers with a piece of wood after the man’s family called for their release and an independent investigation.

The new video from the Richland County Sheriff’s Department showed an extra minute before the Saturday shooting in which Irvin D. Moorer Charley’s mother asks an officer to “get that (expletive) out of my house” and the deputy notes cuts on her arm.

Connie Craig’s tone changed immediately when her son suddenly comes out of the house with a piece of wood with what appeared to have a pointed end. Moorer Charley walked toward a deputy who pointed a gun at him, telling him to drop what the officer calls a knife, according to the video.

A second deputy who had just arrived tried to stun Moorer Charley with a Taser, but it had no reaction and Charley charged with an officer. Video showed the officer fired seven times while backpedaling until Charley fell, stumbling, on his back.

Moorer Charley’s family said at a news conference Wednesday that deputies should have brought in a mental health crisis team the sheriff’s department recently created because deputies had been at the home a number of times to deal with Moorer Charley’s mental breakdowns. They also said officer didn’t need to shoot a man who at one point stepped backwards and just had a piece of wood. The sheriff would later say it appeared to be the arm of a chair.

“My son was a loving son. Didn’t bother nobody. He just had mental health issues,” Craig said.

Richland County Sheriff Leon Lott said Sunday he thinks deputies John Anderson and Zachary Hentz did what they had to do in a close encounter that appeared to be turning violent. It was the first fatal shooting by deputies in one of South Carolina’s largest departments in nine years.

“We can’t expect these deputies to go out here and be killed,” Lott said Sunday. “They have to protect themselves. And that’s what this deputy did yesterday. He protected himself.”

The new body camera footage shows Moorer Charley’s brother telling Anderson his brother had a knife, quickly correcting it to scissors. He adds “don’t shoot or nothing. He don’t got no gun.”

The videos show Moorer Charley slowly walk toward the deputies with the piece of wood as they demand he drop it and get on the ground. At one point he starts backing up and said “Y’all can shoot me.” The deputes start moving toward him and he starts walking at them again.

“We believe officers could have disarmed Mr. Charley easily and without the use of deadly force. yet they came in with guns blazing,” family attorney Shaquana Cuttino said.

After the shooting, Craig can be heard crying out “Irvin!” and wailing and screaming. The deputies handcuff Moorer Charley as blood pooled around him. Hentz, who fired the Taser and his gun from him, said “all you had to do is drop the knife,” on the body camera footage.

Most of the 13 minutes of video from both deputies show them going back and forth doing CPR on a bloody Moorer Charley with his eyes up and his head wobbling uncontrollably back and forth with each chest compression.

The family was shown the video Monday and demanded the sheriff’s department release it too. The sheriff initially only released a 15-second clip with Moorer Charley walking at the deputy, saying the shooting itself was “just not something everyone needs to see,” then released dashboard camera video that showed the shooting from a distance. The 13-minute clips were released after the family’ Wednesday news conference.

The Richland County Sheriff’s Department is investigating the shooting itself. Lott has said his deputies have the expertise and temperament to fairly investigate their fellow officers. He also uses a citizen advisory board to review shootings and other major incidents and report back to him and asks the FBI to review any officer shootings. A prosecutor will review the department’s findings and decide if the shooting was justified.

Another family attorney said it is unethical for the agency whose officers killed Moorer Charley to also investigate the shooting,