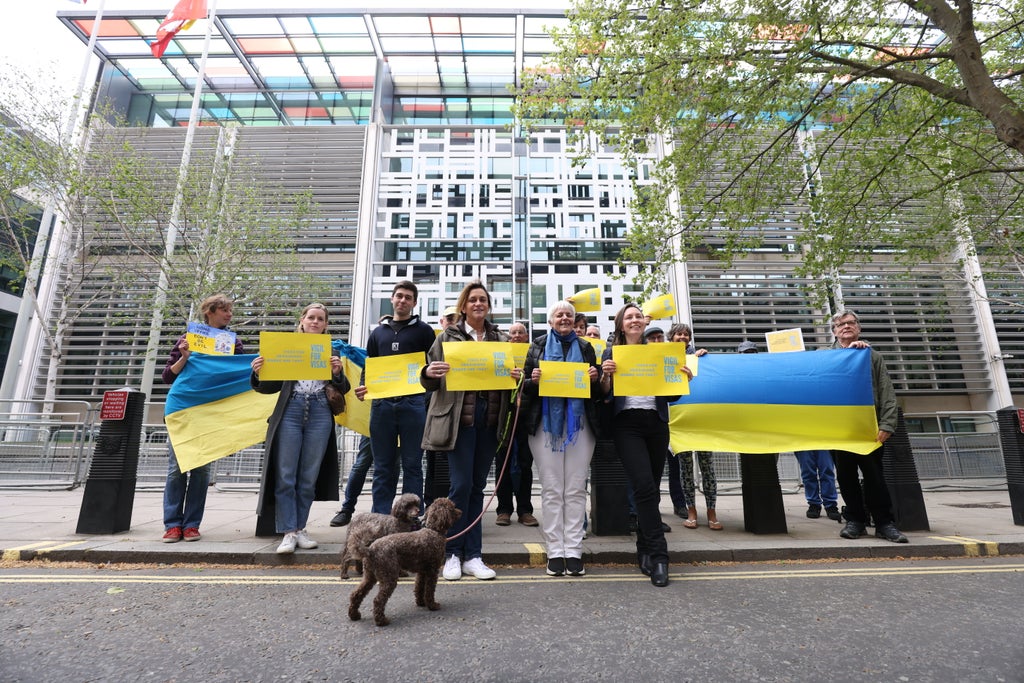 More than 800 Ukrainian refugees have been waiting since March to come to the UK under the Homes for Ukraine scheme, according to would-be sponsors.

British hosts frustrated by delays have compiled a spreadsheet detailing how many refugees are waiting since the sponsorship scheme opened on March 18.

It shows that visa applications for at least 622 Ukrainians, sponsored by 310 UK hosts, are still outstanding after being made during the first week.

A further 261 refugees, sponsored by 130 Britons, are waiting for a decision on applications made during the second week of the scheme.

And 128 Ukrainians who applied under the scheme, sponsored by 43 hosts, after April 1 are still waiting.

The data is not exhaustive and is likely to be an underestimate of the true numbers waiting since March, organizers believe.

Official figures show that there have been 65,900 applications under the sponsorship scheme since last Wednesday, with 39,300 visas issued.

There has been widespread concern about the length of time it is taking for people to reach safety under this route, with multiple examples of family members’ visas coming through at different times, despite them applying on the same day.

Louise Marcinkevice, who helped compile the spreadsheet, said the delays are “incredibly frustrating”, especially as she has heard of people who applied early on making second applications which have then been approved within several days.

The 36-year-old from Cleethorpes, Lincolnshire, said she has offered to take unpaid leave and help Home Office officials address the backlog but has received no response.

She is sponsoring a mother and daughter who are in Poland and told the PA news agency: “We are still waiting for two outstanding applications, we applied within the very first hour.

“Something must have happened, it doesn’t make logical sense to me.”

Several community groups of would-be sponsors will be protesting outside the Houses of Parliament on Monday afternoon, before meeting MPs.

Marlow Ukraine Collective, which is joining the protests, comprises of 45 host families who are sponsoring 123 Ukrainians, including 56 children.

Only 19 visas had been granted as of Friday.

They said the process is “causing untold stress to host families and Ukrainians”.

Debbie Farnfield, from Marlow, Buckinghamshire, has been waiting for visas since late March for the family of five she is sponsoring, and will be joining the protest.

The parents and two children were told last week they can go to Warsaw in Poland to collect their permission to travel documents, but nothing has come through for the third child, a five-year-old boy.

The 68-year-old said she feels “very, very angry and frustrated for them”.

Asked if she has heard of other cases where visas for children have not arrived, she said: “It’s almost seems to be like a policy… we are hearing this again and again, it’s so frustrating.”

Kate Clarkson, a Manchester-based nurse who was retired but returned to work during the pandemic, helped a mother and daughter in Poland apply for visas more than a month ago.

The 42-year-old mother she is sponsoring has received her visa but her 21-month-old daughter is still waiting.

While in a refugee camp in Warsaw the pair caught rotavirus, and the toddler became so unwell she had to go to hospital.

“I am now ashamed to be British because of the way we are treating people.”

She said of the mother: “She feels as if she is being made to be just to stay alive. It’s an awful feeling.”

Rebecca Lewis described the system for those who want to provide a temporary home to Ukrainians as “incredibly frustrating”.

She said: “It is a crying shame that all this generosity (from people in England) is being wasted in a bureaucratic swamp.”

Ms Lewis is among campaigners who went to the House of Commons on Monday to tell their local MPs that the visa application process needs to be simplified. The government needs to hold its commercial partner to account to ensure the system is efficient, they add.

Ms Lewis, a 44 year-old teacher of Marlow, Buckinghamshire, is sponsoring Mariia, 38, and her children Vladyslav, four, and Sofia, five, while their father Oleksandr is in Ukraine fighting on the front line.

The mother’s visa arrived on April 9 and, in desperation, after having waited more than 33 days for the children’s visas to come, Ms Lewis contacted an immigration lawyer. It was only after a lawyer became involved over the “intolerable confusion and delay” that the visa’s came through to the family who were then staying in Athens, she said.

Ms Lewis believes the system is so slow that people’s health is being damaged and job opportunities are being squandered.

She added: “We have got people sitting in shelters in Kyiv frantically checking their emails to see if their visas have landed. There was a case of two babies who were sleeping in a Polish Tube station in temperatures of minus 8C waiting for their visas.

“We need the Government to slash the red tape so that the truly generous spirit of the British people can come through.”

A Government spokesman said: “Thanks to the generosity of the public who have offered their homes to Ukrainians fleeing the war and through the Ukraine Family Scheme, more than 71,800 visas have been granted with 21,600 Ukrainians arriving safely in the UK.

“The Home Office is now processing thousands of visas a day. This shows the changes made to streamline the service are working and we’ll continue to build on this success so we can speed up the process even further.”