Characters from the popular “Star Wars” saga will take Donostia-San Sebastián on Friday 26 and Saturday 27 November, with a calendar of charity events that includes a parade of more than 200 people through the streets of the capital of Gipuzkoarra.

This is the international solidarity event ‘Pink Force Day‘, which will be held for the first time in the world and will honor the Gipuzkoa Blood Donor Association.

This event, organized by The Pink Force Foundation, has the collaboration and support of the Basque Government Department of Tourism and Commerce, the Provincial Council of Gipuzkoa and the San Sebastián City Council, as well as the Gipuzkoa Blood Donor Association.

The event will be attended by Albin Johnson, founder of the Legion 501, an international association of Star Wars fans with more than 14,000 members worldwide. Likewise, the British actress will visit the capital of Gipuzkoa to participate in the event Samantha Alleyne, known for being the first female ‘Stormtrooper’ (member of the Empire’s stormtroopers) in Star Wars, and who has appeared in all five films of the saga in the Disney era.

17:00 – 18:00 Solidarity march (parade) from the Miramar Palace to the City Hall (Alderdi Eder) along the Paseo de La Concha

18:00 – 20:00 Terrace of the Town Hall. Tribute to the Gipuzkoa Blood Donors Association and photocall.

Although it will be the first time that “Pink Force Day” is celebrated, this will not be the first time that imperial soldiers and the protagonists of “Star Wars” visit Euskal Herria. In September 2016, the streets of Bilbao already had the opportunity to see Darth Vader, Darth Sidious, Obi-Wan Kenobi and hundreds of other characters in a 501st Legion parade. 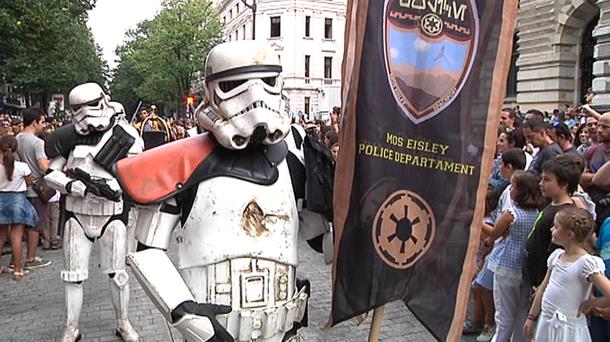