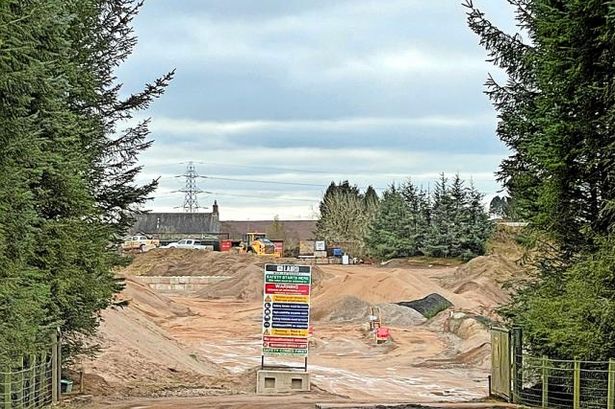 More than 100 objections to a proposed major development on the outskirts of Blairgowrie have been submitted to Perth and Kinross Council.

Laird Aggregates is proposing to develop a 30-hectare quarry to extract sand and gravel from land north of the B947 – across the road from its existing site, which will continue to be used for processing and stockpiling.

An indicative design identifies three excavation areas to be worked on over five phases, excavating up to 75,000 tonnes a year for up to 17 years.

However, concerned locals have claimed proposals for the new quarry would see an area the equivalent size of about 70 football pitches dug up over that timeframe.

The planning application for the quarry was submitted to the local authority just before Christmas.

Some of the objections have highlighted concerns including the noise associated with the extraction process, the haulage operations of the quarry, dust and air quality, traffic, the environmental and visual impact on the landscape and the potential impact on scheduled monuments of historic interest in the area.

And some of the mainly elderly local residents also said that they felt they were being discriminated against as they were unable to access online meetings and consultations.

Blairgowrie and Rattray Community Council is among the objectors

The statutory organization’s comprehensive letter to the local authority states: “We not only support the most directly affected residents in their objections, but also the very valid concerns raised by community groups and other members of our community, as this application affects the town as a whole.

“First and foremost, we are very concerned about a number of issues around the pre-application consultation that was carried out.

“Covid restrictions meant that the only meeting for residents was online and then only for residents within 300m of the application site. This was despite PKC issuing a strong recommendation in writing to Laird Aggregates to extend the consultation radius to 750m, which would have given residents of Kinloch and houses around Ardblair an opportunity to find out about the proposal.

“Additionally, PKC made a written recommendation that Lairds should offer a further meeting and should also notify MSPs. None of these recommendations appear to have been followed up by Lairds.

“We would have expected a development of this magnitude, with the impact it will have on the whole town, to have had a much more far-reaching and robust pre-application consultation process.”

The community council also pointed out that the site in question has not been designated for minerals development in the local development plan, and said that the scale of the project is of “great concern” and “disproportionate” for the area, particularly given its proximity. to the town.

And referring to the declared climate emergency, the letter from BRCC states: “Going ahead with this project will lock PKC infrastructure into 14 years of estimated emissions of at least 12,000 tCO2e per year, totaling 168,000 tCO2e over its lifetime, and hold back investment for transition to a more sustainable renewable economy.”

It also references the three areas of environmental designation that would be affected by the proposed development and the potential loss of soil carbon.

The letter went on to say that the concerns are not short-term but “one that will be with us as a community for the entire duration of the extraction, that is 16 years or more, and some will stay with us forever.”

And the community council requested that, if permission was granted for the development, then a community payback scheme such as those related to windfarm developments in the area, be agreed with the local community and put in place.

Blairgowrie and Glens Conservative ward councilor Caroline Shiers will not be supporting the application when it is considered by the local authority.

She said: “I have been reading the comments made regarding this application.

“I have met with local residents and I am in regular contact with them regarding their concerns.

“I will be seeking to support their representations when the application is heard by the council and will not be supporting the application as I really believe the impact on Blairgowrie and the wider area will be negative and that there are serious concerns in relation to the environment. , transport and roads and on the amenity of neighboring residents.”

Tom McEwan is also a councilor for the Blairgowrie and Glens ward. The SNP elected member said: “I am not surprised the quarry plans have generated such public interest and I am sure the planning report and committee will deal with the application in its normal efficient way with the opportunity for deputations and questions before councilors make their decision .”