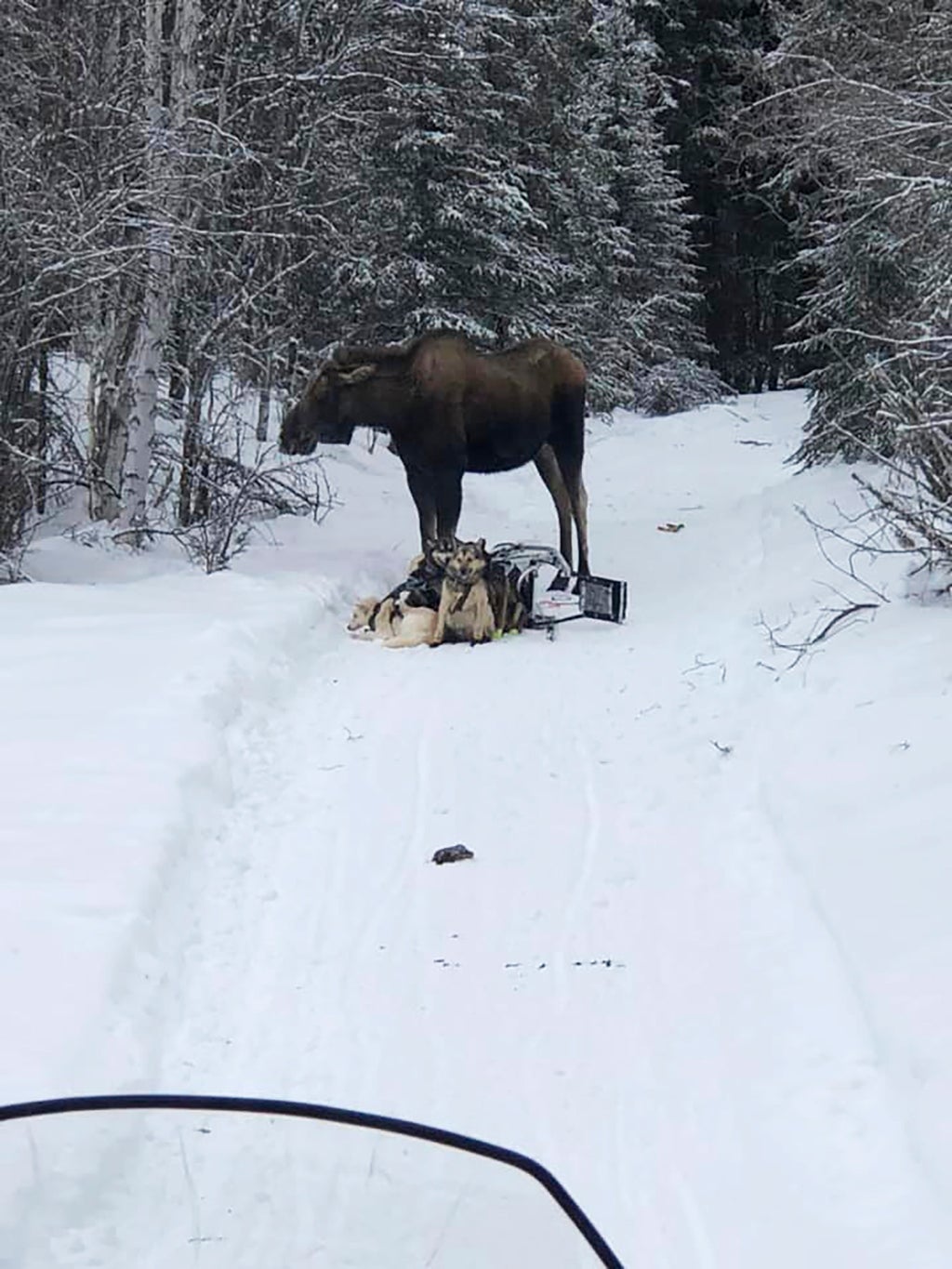 A large bull moose spent more than an hour stomping on the sled dog team of a rookie Iditarod musher in the wilds of Alaska last week — and the attack didn’t end even after Bridgett Watkins emptied her gun into the animal.

She said on Facebook Friday that the moose, after seriously injuring four of her dogs, wouldn’t leave and that the order stopped only after she called friends for help and one showed up with a high powered rifle and killed the moose with one shot.

“This has been the most horrific past 24 hours of my life,” she posted after the Thursday moose attack on the Salcha River trail system near Fairbanks.

But just days later, her four dogs are on the mend and she’s back training with the others.

“This isn’t what I was planning for, but these dogs and myself have trained for so long and so hard for this race… when I walk back out to my dog ​​yard and I have 12 perfectly healthy dogs out of the 16 and they look at me and all they want to do is run, how can I tell them no?” she told The Associated Press on Tuesday. “That would be selfish of me.”

“These are freaking amazing athletes that just survived probably the most traumatic experience of any dog ​​team ever in history, and they’re survivors and they’re still pushing through,” she added.

Watkins said that the attack, first reported by the Fairbanks Daily News-Miner, happened while she was on a 52-mile (83.7-kilometer) training run for the nearly 1,000-mile (1,609-kilometer) Iditarod Trail Sled Dog Race. It starts March 5 in Anchorage

“As he charged me I emptied my gun into him and he never stopped,” she wrote on Facebook. “I ran for my life and prayed I was fast enough to not be killed in that moment. He trampled the team and then turned for us.”

Watkins said she and a friend who was trailing her on a snowmobile took refuge next to the snowmobile.

The moose stopped its charge toward them about 2 feet (0.6 meters) from the snowmobile and she managed to cut free six dogs that were tied to the machine.

But the moose went back to her sled and began stomping the dogs that were still tethered to it — standing over the dogs and trampling them repeatedly for over an hour.

“I have never felt so helpless in my life,” Watkins wrote. “He would not leave us alone and he even stood over the top of the team refusing to retreat.”

She called friends and the moose was shot and killed after one arrived with a rifle.

Alaska State Troopers had been preparing a helicopter to respond but stopped doing so after they were told the moose was dead, agency spokesperson Tim DeSpain said in an email.

Her four injured dogs were taken to a veterinarian in the nearby community of North Pole and are recovering, Watkins posted.

Watkins, a native of Arkansas who moved to Alaska when she was 5, is no stranger to mushing or its dangers. Her father and step-mother are well-known mushers Allen Moore and Aliy Zirkle.

In the 2016 Iditarod, Zirkle and four-time winner Jeff King were attacked by a man on a snowmobile near the community of Nulato. One dog on King’s team was killed and two others were injured.

See also  Inflation hits the pocket of the Magi in Mexico

Another famous tale of a musher’s run-in with an angry moose happened in the 1985 Iditarod — when the late Susan Butcher came across one while she was leading the race.

She used her ax and a parka to fight off the moose, but it killed two of her dogs and injured 13 others. Another musher came along and killed the moose.

She had to withdraw from the race, but later won four Iditarod races. Butcher died in 2006 from leukemia at age 51.

“It is never a musher’s intention to go out and kill an animal,” Watkins told the AP.

She said no musher would ever travel with a rifle or a large caliber gun, instead preferring to scare off animals with a flare gun. And with all the jostling of the sled, the larger guns could easily go off.

“People have a lot of negative comments about what I should or should not have been doing but they’re not the people on the back of that sled,” she said.

“It’s not that I wasn’t prepared. I wasn’t prepared to kill a moose, that’s correct,” Watkins said. “It’s not my intention to go around in February and hunt and kill an animal. This is like worst-case scenario defending my life.”

She did carry a .380 caliber gun because there are few people where she trains, and she keeps it to deter or scare off animals. She has since upgraded to a larger caliber firearm after it didn’t stop the moose.

“That would be asinine to go back out there on the same trail, the same place, and not have a gun where I can’t truly put down an animal if I have to,” she said.

The experience has rattled her, but it’s really no different than what other people face, she said.

“I’m just trying to face those fears every day because they’re there. It’s not that I’m not scared and I’m not terrified and that I don’t nearly have a panic attack when I’m on the sled and I think I see a moose in front of me,” she said.

“It’s not that those things aren’t occurring… people have these situations in their life all the time. They’re just different obstacles that they have to overcome, and this is mine, and this is my story, and I just hope that I can be inspiring.”

Meat from the moose that attacked her dogs was donated to charity.