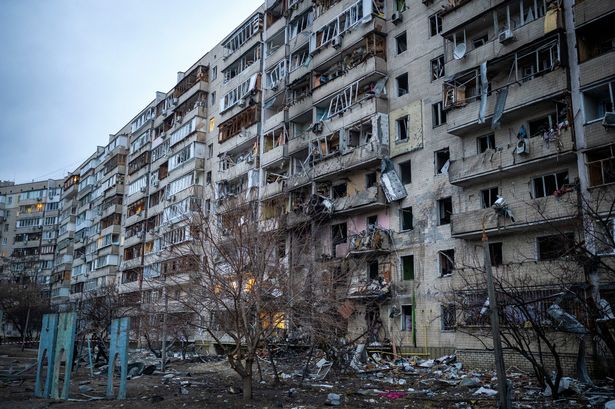 A BBC journalist saw harrowing footage of her family home in Kyiv damaged by Russian airstrikes while live on air.

Olga Malchevska was speaking about the Russian invasion of Ukraine on BBC World News on Friday (February 25) when she revealed that the photos and footage circulating from Kyiv was of the apartment block where her family lives.

During the broadcast from the studio in London, Olga told host Karin Giannone that she had ‘finally’ heard from her mum who, along with her family, are still in the capital city.

“I just got a message from my mum finally. I couldn’t reach her,” Olga said. “She’s been taking shelter, she’s hiding in the basement and luckily she was not in our building which was bombed at night.”

Karin asked: “And that was literally the building we’ve been talking about that has been destroyed by what happened?”

To which Olga responded: “Yes, when we agreed yesterday about coming to your studio in the morning, I could not imagine that actually, at 3am London time, I would find out that actually my home was bombed.”

She added: “Those pictures, that footage that everybody saw… is literally my home.”

Olga then ‘thanked God’ that her family is safe.

It was at that moment the BBC World News showed the photos and footage of Olga’s apartment block, partially destroyed by the strikes.

Understandably overcome with emotion, Olga begins to describe the scenes; seeing the fire brigade coming to help and footage of the streets of Kyiv.

“This current building is my home,” she says in disbelief.

Presenter Karin interjects: “Olga, I don’t want you to be forced to talk about something that’s so sudden and traumatic.

“This is unimaginable for all of you.”

But Olga continues, explaining that she’s trying to find the sixth floor where her home was.

“I just can’t believe in my head that what I am seeing is actually somewhere where I used to live,” she said.

Sharing the clip on Twitter, Karin wrote: “The moment my colleague sees pictures of her family home, partially destroyed overnight in Kyiv. We did not know until that moment it was her actual building that had been hit. Thankfully Olga’s family is safe. “

It comes as Russian forces moved to the outskirts of Ukraine’s capital.

The invasion began on Thursday morning with a series of missile strikes, many on key government and military installations, which were quickly followed by a ground assault from the north, east and south.

People brought sleeping bags and blankets, dogs and crossword puzzles as they sought safety in the makeshift bomb shelters.

In the early hours of the morning, several explosions were heard in different parts of the city. Air raid sirens also went off.

Greater Kyiv Vitaly Klitschko had called on the city’s three million people to stay indoors unless they worked in critical sectors and said everyone should prepare go-bags with necessities such as medicine and documents.