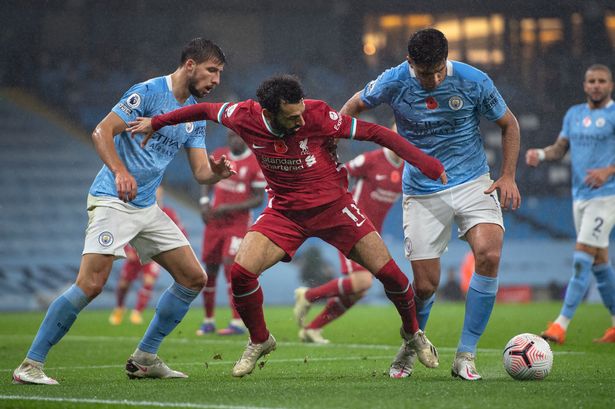 What are the options at the moment?,” Michael Owen. “You are only going either sideways to Manchester City or down anywhere else because there is no one else as good as these two teams in the world at the moment.”

Owen was of course discussing Mohammed Salah’s uncertain Liverpool future, with the star man yet to sign a new contract as he approaches the final 12 months of his current deal. If the situation isn’t resolved, then Liverpool may have to decide to gamble and hope Salah stays, or sell him in the summer to risk losing him on a free transfer in 2023.

It’s a situation City will be watching with interest. Though, of course, it seems like the stalemate is not because Salah sees his future away from Anfield, more on that later, and if he was to leave, it would surely not be an hour across the M62 to Manchester.

Owen is probably right that any other step would be down, but Salah enjoys a god-like status in Liverpool. That’s probably not worth risking to go to their biggest rivals for the next Premier League title they crave so much.

However, Owen’s comments do expose an uncomfortable truth for Liverpool in some regard that will have been lingering for some time. For a club like Liverpool, having their talisman potentially run down his contract appears to be a sign that player and club are not exactly on the same page.

The hold-up can’t be an issue over playing time, or the ambition of the club, or the direction they’re going in. There are plenty of other logistical and financial aspects for players to consider, but often such factors will get sorted if all parties want a deal to be done. As Owen points out these big contracts take time, and this situation is generally out of character for Liverpool’s impressive recruitment department, but urgency will increase the closer it gets to the summer.

At City, the club have an impressive record of bringing down key players to long-term contracts in good time. Kevin De Bruyne, Ruben Dias, Ederson, Joao Cancelo, Bernardo Silva, Kyle Walker and Aymeric Laporte have all been given extensions since 2019. Even the brightest youngsters are given long-term deals to protect the club and Txiki Begiristain knows to sort priority players early before they get a chance to run down a contract.

If they didn’t want to stay – like Leroy Sane, or Eric Garcia – then the club give themselves time to sell if they want to.

City do have some important players out of contract in 2023 like Salah, with over-30’s Riyad Mahrez and Ilkay Gundogan two, along with Raheem Sterling and Gabriel Jesus. These are issues that City will be well aware of as they too are within the final 15 months of their deals.

As important as they are, though, they are all replaceable whereas the likes of De Bruyne, Dias or Salah would be a much bigger loss with the task of finding successors much more difficult.

City’s chances of signing Salah might be rated as slim-to-non-existent, but as they watch his situation unfold in the coming months they know it serves as a reminder to get their business done early and quietly.