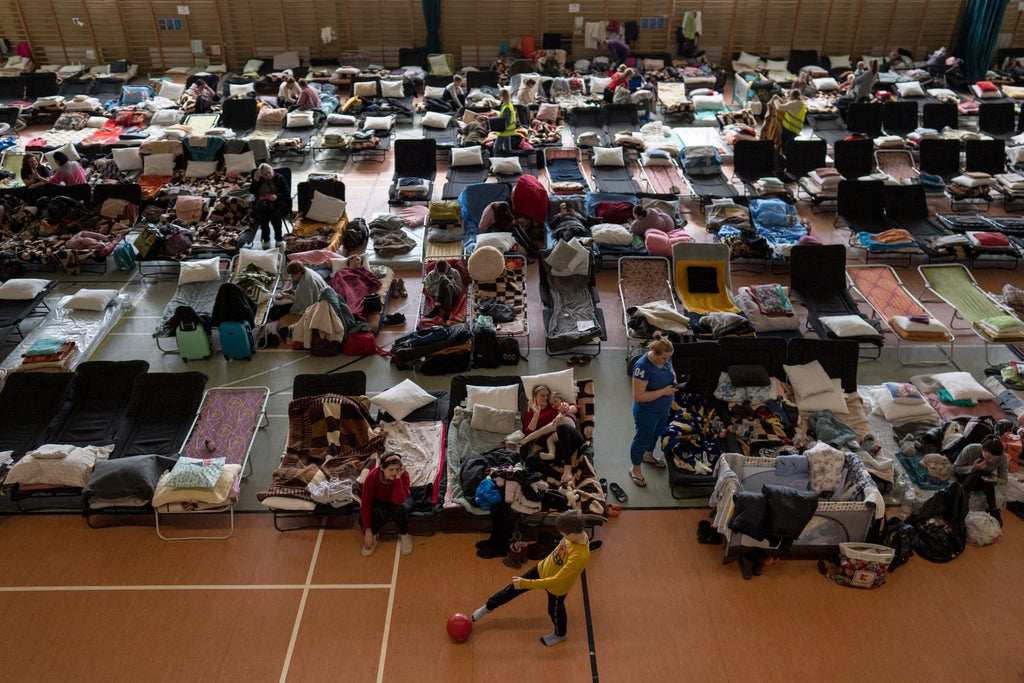 The government is refusing to publish figures on the number of Ukrainian refugees who have so far applied to the UK sponsorship scheme, amid concerns that there have been “hardly any” applications.

Charities and lawyers have warned that a “convoluted” application process requiring people who are still in Ukraine or are currently homeless near the border to find someone in the UK able to house them, and then requiring the refugee or host to fill out “very difficult ” online forms, is making it “nigh on impossible” for people to apply.

Prospective hosts themselves have told The Independent that when they have tried to submit applications to the sponsorship scheme they have found it to be an “impossible” process.

When asked how many refugees had applied to the scheme since it opened on Friday, the government said it would not be releasing any data as of yet. This is despite the fact that ministers released numbers on applications to the separate Ukraine family scheme within two days.

The Homes for Ukraine scheme was designed to allow Ukrainians with no family links to come to Britain and be hosted by members of the public, who will be paid £350 per month for doing so. More than 150,000 people have so far registered their interest in hosting.

The scheme requires refugees to have identified someone in the UK willing to host them before applying, which has led to a flood of Facebook pages being set up designed to “match” hosts with refugees – prompting concerns it leaves vulnerable people exposed to abuse.

Once a refugee and host have identified one another, one of them must submit an application to the Home Office website, which requires them to be in close contact with each other during the process so that they can fill in the relevant details.

The Independent is raising money for the people of Ukraine – if you would like to donate then please click here for our GoFundMe page.

Katherine Klinger, 63, who lives in London, said it took her 12 hours of “complete concentration” over the weekend to complete the application process for a Ukrainian family of eight whom she is hoping to host.

“I can’t believe how difficult they’ve been. It’s a really difficult form. The system will not accept anything unless it’s a PDF. It simply won’t get uploaded. You have to have a fairly sophisticated computer to do this,” she said.

“I’m sitting quietly at home in the warmth with a big computer. There’s no way someone would be able to fill it out on a phone somewhere in the Ukraine or Poland or Slovakia.”

Ms Klinger added: “There’s just no way all the 150,000 people who have registered to host will go through this process. It will be very small numbers.

“It’s a complete shambles. I think it’s a sort of glorious smokescreen for the government to say ‘oh, aren’t we wonderful’, but in fact they’re making it impossible.”

Robina Qureshi, executive officer at Positive Action in Housing, a charity that has been matching refugees and asylum seekers with hosts in the UK for decades, said 350 Ukrainian refugees had contacted the charity, but that none had yet been able to successfully apply to the scheme.

“The reason ministers are refusing to release the figures is because there are likely to be hardly any. I don’t know anyone who has completed the visa application process and been granted a visa via the sponsorship route. Refugees are being led down to a dead end,” she said.

“At Warsaw and the ports there are no UK representatives encouraging refugees to go to the UK. There’s no guidance on the visa applications at all. There is no one to help people fill in forms.

“Our hosts are working with their guests via WhatsApp to complete the forms – both are tech savvy and speak perfect English but it’s nigh on impossible. There are no timescales just confusion upon confusion.”

A London-based lawyer who is currently at a humanitarian center in Poland near the Ukrainian border, which is holding around 2,000 refugees, said there was “no information” there about the fact that there was an option to go to the UK.

The lawyer, who did not wish to be named, said a number of refugees had nonetheless become aware of the UK sponsorship scheme via the internet and had found hosts via social media – but that the application process was “not fit for a crisis situation” .

“The visa application system itself is not fit for purpose. You need to upload copies of documents in PDF format, which means a refugee who’s crossed the border with a shopping bag needs to have access to a PDF converter,” she said.

“They then need to print a checklist – sign it, scan it, feed it back into the system, so you basically need to have an office.”

The lawyer said that volunteers at the center had assisted with about 15 applications to the sponsorship scheme over the past few days, while there were “busloads” of people leaving the facility every night to go to other European countries.

“People don’t even know it’s an option to go to the UK, and maybe that’s deliberate from our government. Maybe they only want a trickle of people,” she said.=

“And for those who have applied, we haven’t been able to find any information on how long the processing time is. They’re allowed to stay at this center for two days. We have no idea how long they need to wait before they’re going to get to the UK.

“In the meantime people are not safe here. There are huge trafficking risks. Bad things are happening to women and children.”

A government spokesperson: “We are moving as quickly as possible to ensure that those fleeing horrific persecution in Ukraine can find safety in the UK, and our Homes for Ukraine scheme now allows those without family connections to come here.

“The Home Office has acted to streamline the visa application process so valid passport holders no longer have to attend in-person appointments before arriving, allowing us to welcome people faster. They have also increased capacity at Visa Application Centers to 13,000 appointments per week across Europe to help people without documentation.”

The Independent has a proud history of campaigning for the rights of the most vulnerable, and we first ran our Refugees Welcome campaign during the war in Syria in 2015. Now, as we renew our campaign and launch this petition in the wake of the unfolding Ukrainian crisis, we are calling on the government to go further and faster to ensure help is delivered. To find out more about our Refugees Welcome campaign, click here. To sign the petition click here. If you would like to donate then please click here for our GoFundMe page