The ETA express Mikel Albisu, who was released from prison in January 2019 after completing his sentence, has declared today in the San Sebastián Courts because he is being investigated for his alleged involvement in the murder of the PP councilor, Gregorio Ordonez, on January 23, 1995.

During his appearance, Albisu denied his participation in the Ordóñez crime and recalled that He has already served his sentence for belonging to ETA. For his part, the lawyer for the victim’s family, Ruben Múgica, has called for “redoubled efforts” to convict those who “were leaders and bosses of the criminal gang.”

Subsequently, a hearing was held to decide on the precautionary measures requested by the Dignity and Justice Association, which alleged a “very high risk” that the accused would flee.

Through a car, the National Court has prohibited Albisu from leaving the Spanish State without judicial authorization and has determined the withdrawal of your passport within 24 hours. If you do not have one, you will not be able to obtain a new document.

It also demands the designation of an address and a permanent contact telephone number, where notifications can be delivered and be summoned.

In this sense, it warns you that failure to comply with these measures and the absence of the investigated person from any judicial appeal that is made, without just cause, could lead to the revocation of this situation of freedom and the determination of his entry into provisional prison.

See also  Ukrainian refugees: How can I take part in the new sponsorship scheme?

Against the judicial resolution there is an appeal of reform and subsidiary of appeal within a period of three days.

At the end of his statement, in demonstrations to the mass media gathered before the Courts, Albisu himself explained that his “only words” in court have been to recall that he had already served two sentences of 20 and 5 years in France for a crime of “association of criminals”.

In addition, he has ensured that the new accusations that are made against him have been obtained through “torture and lies”. 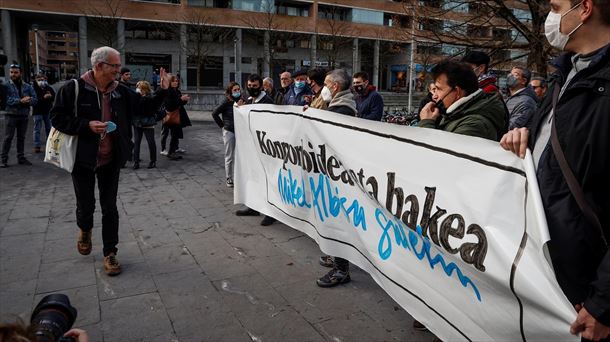 The leader of Sortu, Haimar Altuna, has vindicated the “steps” that “the pro-independence left” is taking and will continue to take towards peace, coexistence and for a democratic solution in the conflict we have with the State, “while he has said, “the usual keep trying to block that path.”

For his part, the president of the Basque PP, Carlos Iturgaiz, has described as “disgusting” that Mikel Albisu has been received amid applause before the Donostia court.

In a message on the social network Twitter, Iturgaiz affirmed that “they are miserable, that far from abandoning the ‘ongietorris’ they humiliate the victims”.

“It is a new disgusting demonstration of exaltation and apology for terrorism with a luxurious reception ‘made in Sortu’ to the head of ETA responsible for the murder of my colleague from the Basque PP Goyo Ordóñez,” he added.