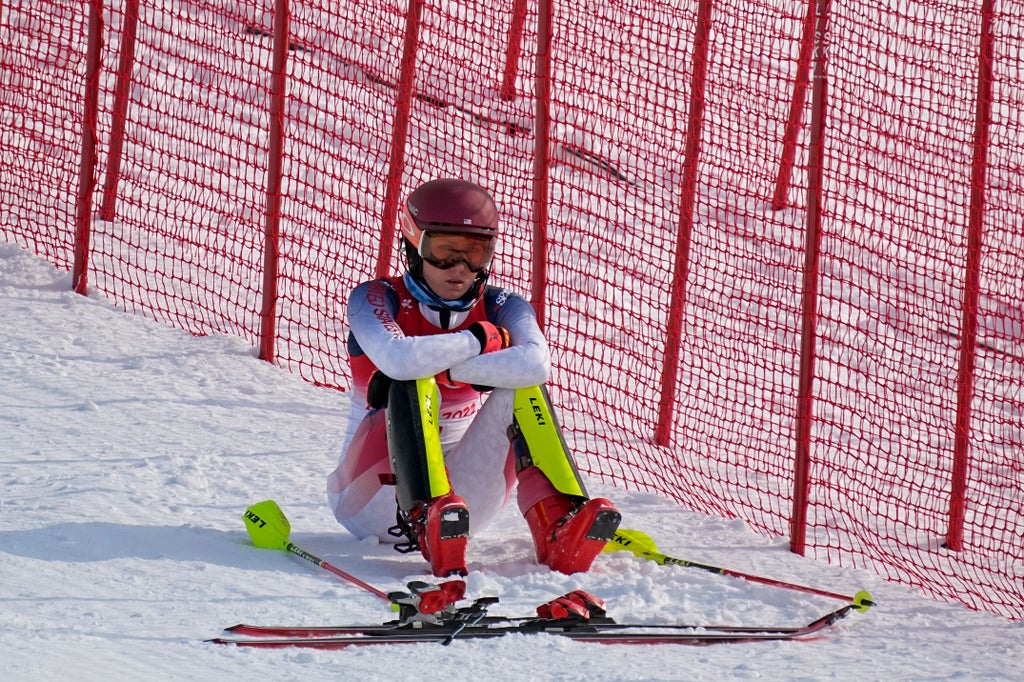 Mikaela Shiffrin may not ski again in Beijing, asking ‘what’s the point’ after her Olympic nightmare took another sick turn and sparked a mental health row.

The most successful slalom skier of all time fell after four gates for the second straight Olympic race, her second slalom DNF in four years.

“Pretty much everything makes me second-guess the last 15 years. Everything I thought I knew about my own skiing and slalom and racing mentality.”

Having skied out of Monday’s giant slalom as reigning champion, the 26-year-old’s Olympics has so far lasted eight gates and about 15 seconds, live on discovery+, Eurosport and Eurosport app.

Shiffrin, whose father Jeff passed away a year and a week ago, sat by the side of the ‘Ice River’ piste, head bowed, for 30 minutes while other racers went down the course.

“I was trying to look back and think about what I’ve been doing that would suggest that on the fifth gate I would push myself a little bit too hard,” Shiffrin said.

“It’s probably a culmination of the other day and today. It feels like a really big let down.

“It’s not the end of the world and it’s so stupid to care this much, but I feel I have to question a lot now.”

US broadcaster NBC lingered for all of that time on a shot of her being consoled by a coach, with commentators plumbing the depths of disappointment in Shiffrin’s failure.

“Drink every time they say the word devastating,” tweeted one.

Comparisons were drawn to the initial coverage of Simone Biles’ struggles with the ‘twisties’ in Tokyo and subsequent withdrawal from events for mental health reasons.

“NBC learned absolutely nothing from Simone Biles and now they are doing the SAME thing to Mikaela Shiffrin and it’s infuriating,” said another.

Biles herself took to Twitter to send love hearts of support for Shiffrin, who left the door open to the possibility she will do the same as the gymnast and withdraw from the Games.

“The hill and the ski track looks pretty incredible and I think it will be a pleasure to ski but I also have some teammates who are really fast and we have the athletes who can fill the spaces, so if I am going to ski out on the fifth gate, what’s the point?

Shiffrin has won 47 World Cup slalom races, the most by any alpine skier, male or female, one more than Swedish legend Ingamar Stenmark.

She has failed to finish consecutive technical races for the first time since December 2011, when she was 16 years old.

Jeff Shiffrin’s death – aged 58 as a result of a brain injury caused by a tragic accident in Colorado – nearly led his daughter to step away from the sport.

“But I am OK to feel that way, it’s taken a lot of years and I am not scared to feel a little bit weighed down by some expectation anymore.

“Maybe because it doesn’t feel like you can’t let it go and say, ‘That’s not the worst thing I ever experienced in life’.

“As hard as it is right now, it’s not comparable to some of the worst things that I have experienced.

“It does give me perspective but right now, I would really like to call him.

“So, that doesn’t make it easier. He would probably tell me to get over it. But he’s not here to say that, so on top of everything else I am pretty angry at him too.”