Skip to content
Home News Mick Lynch: Who is the trade union boss taking on Piers Morgan and Kay Burley?

STRIKES are underway across Britain’s rail network after a last attempt at talks between unions and rail bosses failed on Monday.

The strikes have been organized by the National Union of Rail, Maritime and Transport Workers (RMT), as well as the Associated Society of Locomotive Engineers and Firemen (Aslef).

RMT’s general secretary Mick Lynch has made several media appearances this week amid the travel disruption, and clashed with Sky News presenter Kay Burley on Tuesday when she repeatedly asked him about the picket lines.

Agency rail workers will be stopped at picket lines and asked not to cross.

He also made a notable appearance on Politics Live – telling Labor frontbencher Baroness Chapman that he didn’t know who she was – and on Newsnight where he repeatedly called a Tory minister a liar.

did Mick Lynch just drop a solid gold clip on every news channel he went on this morning? I swear I’ve seen about half a dozen different ones on my timeline today https://t.co/DhLp3W1JUS

I think everybody should follow the Mick Lynch guide to dealing with Tory liars. #newsnight pic.twitter.com/TZaObHWp2p

Who is Mick Lynch?

Lynch was born to Irish parents in 1962 and was raised in Paddington.

He left school when he was 16 years old and went onto become an electrician and before moving into construction.

He joined a union but was illegally blacklisted for doing so and would receive a large compensation package for this 20 years later.

After leaving the construction industry, Lynch went to work for Eurostar in 1993 which is how he became involved with RMT.

In May 2021, he stood to become the permanent general secretary and was elected to the position.

Since the strikes started, he’s been making waves on social media – with people even making memes about his strong media performances.

What are his thoughts on the rail strikes?

The RMT is looking for improved pay and has said that rail staff who have been working through the pandemic have faced hundreds of job cuts and pay freezes.

Ahead of the strikes, Lynch said: “Railway workers have been treated appallingly and despite our best efforts in negotiations, the rail industry with the support of the Government has failed to take their concerns seriously.

“We have a cost of living crisis, and it is unacceptable for railway workers to either lose their jobs or face another year of a pay freeze when inflation is at 11.1 per and rising.

“Our union will now embark on a sustained campaign of industrial action which will shut down the railway system.”

The RMT is seeking a pay rise of at least 7%, in line with the rise in the cost of living.

He recently hit out at digital minister Chris Philp who was trying to argue against the strikes and took on Piers Morgan who asked why we weren’t giving nurses a pay rise because they were at the “real frontline” throughout the pandemic.

“Why are we not giving nurses 11% pay rises? Police workers? People who were really at the real front line of all this?”

Lynch replied by telling Morgan that “railway workers died” because they continued to go to work all throughout lockdown.

People also seemed to enjoyed his interview with Sophy Ridge who quizzed Lynch about the impact of a pay rise on inflation.

She noted how the Governor of the Bank of England Andrew Bailey had expressed concerns about this and was calling for a pay restraint.

“There are railway bosses taking home millions of pounds every year. The railways made £500 million of profit last year, when fares and passengers were at an all-time low.

In case you want to know what’s actually going on. pic.twitter.com/xvsnowK5kd

“And if workers’ wages don’t go up, it means a transfer of wealth from the poor to the rich.

“We’ve got more billionaires than we’ve ever had in this country. The rich have never been richer.

“And the reason they’re able to do that, and get richer all time, is cause they’re deliberately depressing workers’ wages, inflation has come on board now and virtually nobody has had a pay rise for the last two or three years .

“So this idea that there is a wages price spiral is nonsense.” 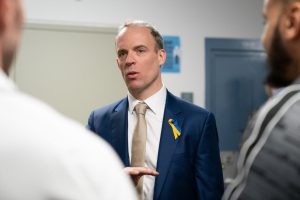