Skip to content
Home News ‘Miau’: the novel of the unemployed | Present 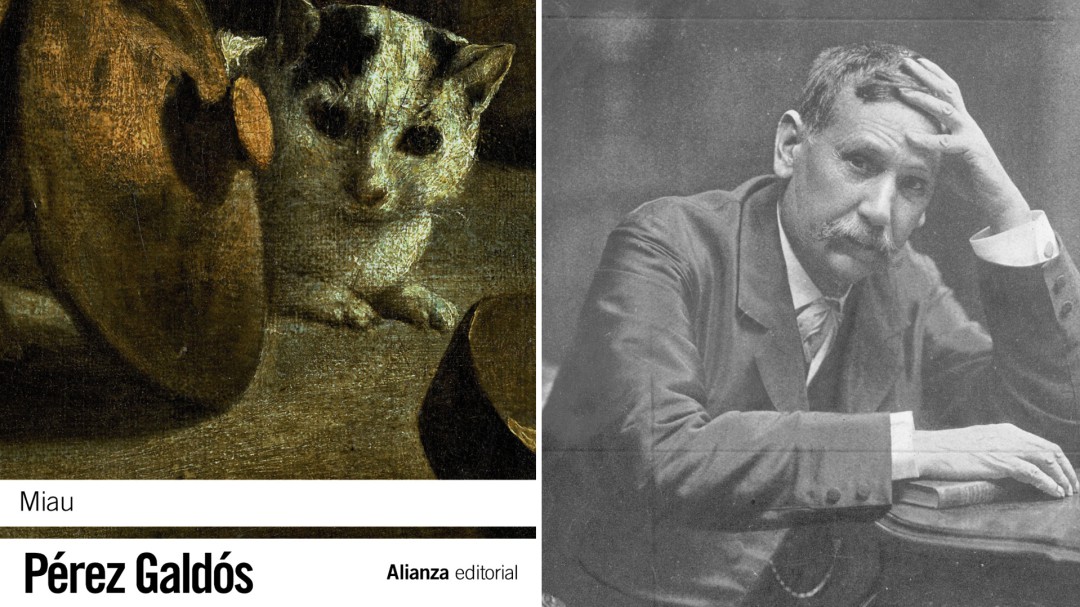 Benito Pérez Galdós was born in Las Palmas de Gran Canaria on May 10, 1843 and died in Madrid on January 4, 1920. He is one of the greatest storytellers of our literature. As an author, he revolutionized the Spanish narrative. In ‘A book one hour’ we have already told you ‘Marianela’, ‘Trafalgar’, ‘Doña Perfecta’, ‘Nazarín’, ‘Misericordia’, ‘Tristana’ and today we bring you ‘Miau’.

‘Meow’ it was published in 1888, in the marvelous decade of the 80s of the 19th century, in which Galdós published 11 magnificent novels. It is a hilarious novel, very modern and talks about absolutely current issues. Written with absolute freedom, it is full of unforgettable characters.

The thematic structure of ‘Miau’ refers to the “absurd world” of the bureaucracy, a world of injustice and arbitrariness; the narrative structure follows a well-known and frequently used pattern, that of the descent into hell, prolonged here according to the Dantean model, by the (hypothetical) ascent to Paradise. To understand the meaning of this pattern, one must observe the polarity that underlies the deep layers of the novel: the Evil-Good, Hell (real) -Paradise (dreamed) polarity.

Demonic powers, injustice and corruption rule the negative zone; on the positive, there is a god whose distinctive notes are goodness and powerlessness. The negative pole is tangible, as can be seen in the references to the family circle and the dark ministerial labyrinths; the positive is the product of the imagination of Luisito Cadalso, who from innocence contemplates the anguish of hopelessness.

Luisito Cadalso contemplates from the innocence the anguish of hopelessness

Regarding the protagonist, from his presentation the images come into play, from “old and consumptive tiger” successive metamorphoses of increasing expressiveness will reveal his genuine consistency of victim. Luisito has two complementary functions in the text: that of the innocent who, due to his innocence itself, can live in the dream what is denied to adults, and that of conscience of the protagonist, to whom he points out the path of liberation.

From the child’s hand the reader enters the novel and gets to know the women and from his hand, too, he will reach God. It is an important piece of construction. He not only observes the facts but reveals their meaning. It is in the dream that he summons the divine figure. The fainting or lethargy that strikes him the first afternoon of the novel is repeated frequently. God speaks and the child who invents it speaks from his intimate knowledge; the sickly weakness of the creature sharpens his perceptions and multiplies the encounters with the highest interlocutor.

Well settled in the corny space, the women of the family who, through unconsciousness, frivolity and stupidity, embitter Villaamil’s life, go out of their way to pretend what they are not, losing themselves in vague memories of a yesterday in which, during an instant, someone saw them or said they saw them as they imagined. The domestic hell makes the protagonist’s situation more painful, neither understood nor helped by the women.

Galdós resorts to three types of irony: verbal, situational and actantial, linked in writing. Degrading metaphors and belittling adjectives load the verbalization to the extreme and predispose to reading in an inverted way. The irony of the situation is projected above all in the scenes that are part of Villaamil and in those carried out by women.

The arbitrariness of power and the defenselessness of the individual

There is a permanent topical issue in Galdós, the arbitrariness of power and the defenselessness of the individual. There is a Galdosian concern for political corruption, endemic in the country, and for the risks of a government system in which the ideas of justice and freedom meant little and that is why he decides to explore in ‘Miau’ a problem that is the same one examined by writers like Unamuno, Ortega, Baroja and Kafka. By getting ahead of them and by presenting with such intense drama a question that seems more pressing today than ever, Galdós’s modernity stands out better.

Villaamil’s dismissal was not an unusual event but part of a system in which the rise to power of a party implied the incorporation of his friends and bandits into the budget with the correlative removal from the trough of the beneficiaries of the previous political situation. That an official was honest, competent and fulfilling his duty was not enough to exempt him from the general law. What the protagonist of the novel finds it difficult to accept is not the unemployment, but the inexorable permanence in it.

If a certain didacticism never ceased to appear in the Galdosian texts, it is equally true that the artistic conscience of the author prevails over other considerations and allows the creation of such remarkable freedoms that they give rise to a curious phenomenon that could be called rebellion of the text. When he speaks for himself, it is enough to listen to him to discover his freedom. Free writing in which, mediated by the narrator, conversations, solitary wanderings of the extras, fantasies, dreams and chimeras intersect. The performances are loaded with meaning and the actorial functions multiply.