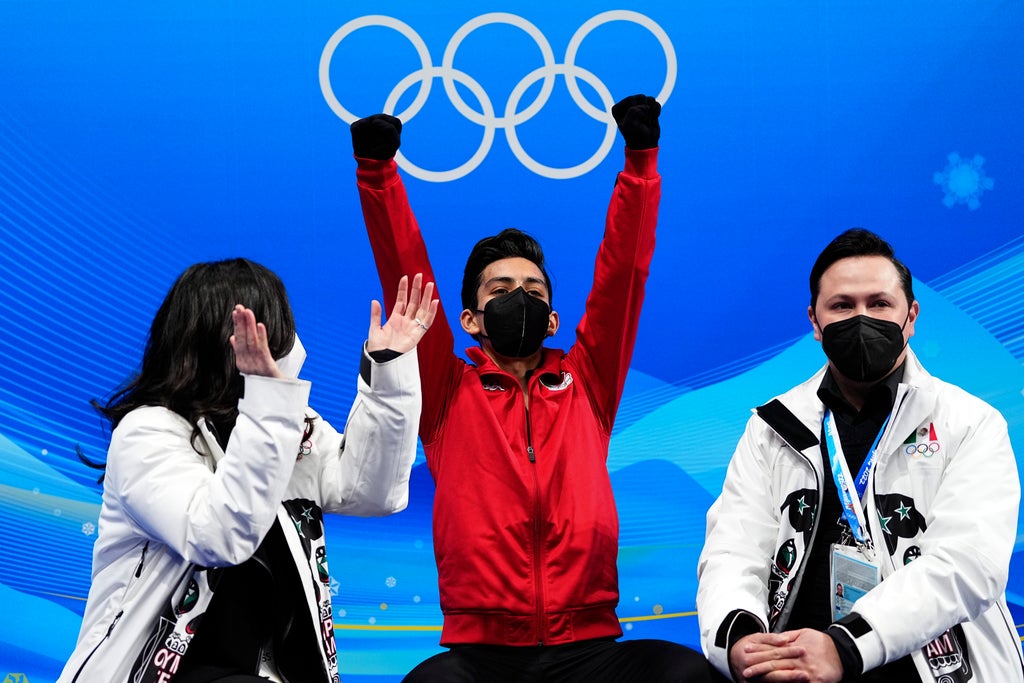 They said he should play soccer. They said figure skating was for girls. They said winter sports made no sense in temperate Guadalajara

But none of those naysayers deterred Mexican figure skater Donovan Carrillo, the rare Latin American athlete at the Winter Games, who has now become an even more rare Beijing Olympics success story – however relative – from that part of the globe.

Carrillo had a career-best performance in the marquee sport of the Winter Games on Tuesday at Capital Indoor Stadium, featuring a well-executed quad toe loop and difficult triple axel.

That allows him to advance to the longer free skate competition on Thursday — a first for Mexico, which hadn’t had an Olympic skater in three decades. It instantly made Carrillo the most successful Mexican figure skater in history.

“For me to have the opportunity to be one of the few Latin American athletes here at the Olympics, it’s really something that motivates me to do my best and to inspire more kids in Latin America and in my country to try to practice winter sports, Carrillo said. “I used to talk this dream with people. They were always laughing or telling me that it was impossible for a Mexican to qualify.”

In Beijing, Carrillo is one of 33 athletes from nine Latin teams: Argentina, Bolivia, Brazil Chile, Colombia, Ecuador, Mexico, Peru and Puerto Rico. There’s another 10 athletes from four other Caribbean teams, including the Virgin Islands, Haiti, Jamaica and Trinidad and Tobago. None have ever medaled at the Winter Games.

Brazil — typically a Summer Games powerhouse — claims the most athletes but the 10 Winter competitors in Beijing are a fraction of their 302 that competed in the Tokyo Games last year.

Among the four athletes on the Mexico team, Carrillo is the only one who stayed in Mexico to nurture his talents, which he insists on doing. Two others have Mexican heritage but train in the US and Canada, while a third — Sarah Schleper — joined the Mexico team after marrying a Mexican and retiring from the US ski team.

Carrillo’s stronger-than-expected figure skating short program on Tuesday was steeped in national pride. His music from him was set to Santana, his father’s favorite band from him. Carrillo’s blade covers displayed the green, white and red colors of the Mexican flag. He wore a sparkly black and gold costume that was custom-made by Mexican fashion designer Edgar Lozzano, who offered it to the skater for free.

“It’s something that I always try to do with my performance, to involve the Mexican culture,” Carrillo said. “Carlos Santana is Mexican. I always try to take on different artists that could help me and motivate me to represent my country.”

The 22-year-old is originally from Guadalajara but moved with his coach to León when he was 13 because his hometown rink shut down. He dreamt of Olympic glory and idolized Spain’s Javier Fernandez, who took bronze at the 2018 Winter Games in Pyeongchang to become the first Spanish figure skater to medal.

Brenda Elsey, a sports history professor at Hofstra University, said win or lose, Carrillo’s debut at the Olympics can only be a good thing for Mexico and the rest of Latin America in terms of winter sports engagement. Mexico does not have a national professional sports league or competitive collegiate system for any winter sports. The Winter Games are also not a geopolitical priority for its government.

“The fact is they would have to go on the European circuit to be able to qualify. The process to get to the Olympics is more of a challenge than people realize, particularly because there’s not a huge culture necessarily within Latin America that is clamoring for this,” Elsey said.

Even at the popular ski resorts in Chile and Argentina, Elsey said the mountain snow sports are so cost-prohibitive that it’s effectively reserved for western tourists and locals with European roots who are already familiar with skiing.

The lack of a Latin American presence at the Winter Games is surely an issue the International Olympic Committee has taken note of. Elsey said winter sports themselves are rooted in Nordic traditions, which is also why Africa, Middle East and Southeast Asia are not well-represented.

“They would love to expand the market to increase the amount of money in marketing and broadcast rights,” Elsey said. “The IOC wants to be relevant to everyone.”

Back at home, it may take another televised round of skating for Carrillo to really break through soccer-crazed Mexico’s sports coverage, though national newspapers were plastered with photographs of a wide-smiling Carrillo on Tuesday.

Mexicans quickly got behind the young figure skater, expressing their pride and support on social media, though he’s not exactly a household name – yet.

Hours after her debut, Anette Tapia admitted she hadn’t been following the Olympics either but had seen something about Carrillo beforehand.

“He has a refreshing essence,” said the 26-year-old designer. “He has a lot of motivation.”

Figure skating is uncommon in Mexico and there are no Olympic-sized rinks in the entire country. Ice rinks are usually limited to attractions inside shopping centers.

In fact, it was on a small rink at the Plaza Mayor mall in the central state of Guanajuato where Carrillo trained in the run-up to the Olympics. His side of him hustle to afford this very expensive sport includes teaching ice skating lessons there.

Carrillo laments how he is snapped back to reality during his training: when people ask him to turn off his blaring music, when he has to practice his dazzling maneuvers while dodging kids and families on the ice for fun, and especially when he has to share half the rink with hockey players.

“The dream of every coach in Mexico is to have the right infrastructure, to keep the skaters training in the country…(so) that they don’t have to go out in order to improve,” said Gregorio Núñez, Carrillo’s coach for the past 14 years. “In our country, it’s very hard to have the infrastructure to practice winter sports.”

See also  An exuberant, boozy Brits showed the Grammys how awards shows should be done

“Sometimes people think that the artistic sports are only for women, so that’s something I had to fight when I was a kid because many people at school told me ‘Oh you’re a girl,’ and they sometimes even think that to practice an artistic sport, it’s going to affect your (sexual) preferences as a person. I never thought that,” Carrillo said. “I think that’s one of the reasons why we don’t have many male skaters in my country.”

Carrillo is proud to make history when he takes the ice for Mexico in the men’s finals on Thursday, though he’s under no delusion that he’s actually competitive with powerhouses likely gold medalist Nathan Chen from the US team.

The Mexican skater is not deterred by this in the least. He’s already eyeing another run in Milan-Cortina in 2026, and sees Beijing as a good experience for his future aspirations of him. He knows simply that his very existence of him at the Olympic rink here is an achievement for his country of him.

“I had a great time on the ice,” an elated Carrillo said. “I didn’t want it to end. I wanted to keep skating and living the Olympic dream.”

Seattle-based AP journalist Sally Ho is on assignment at the Beijing Olympics, covering figure skating. Follow her on Twitter at http://twitter.com/_sallyho.