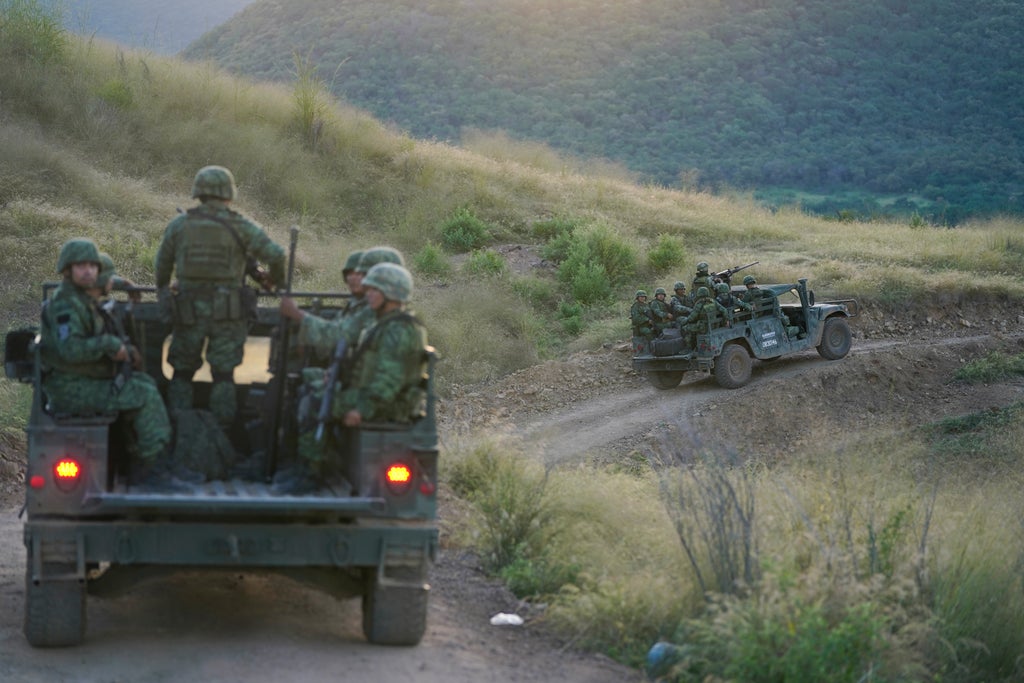 The self-defense movement in the city of Tepalcatepec, in the western state of Michoacán, said improvised landmines severely damaged an armored army vehicle late last week.

A spokesman for the movement, which fights the Jalisco cartel, provided photos showing a disabled army light armored vehicle on a highway with damage he claimed was caused by such a mine.

The spokesman, who declined to reveal his name for fear of reprisals, said the explosion occurred last Saturday in the town of Taixtán, near Tepalcatepec, where locals have been fighting Jalisco gunmen for months.

Warring gangs already frequently use homemade armored vehicles and modified drones to drop small bombs. But it would be the first time cartels have successfully used IEDs in Mexico.

The Mexican Army did not respond to a request for specific comment on improvised explosive devices. But the Defense Department said army patrols were attacked in the area four times on Saturday with explosives, homemade armored vehicles and gunshots that wounded 10 soldiers. The department did not specify what type of explosives were involved.

The Milenio television channel described the improvised explosive devices as buried PVC pipe bombs with a round metal base underneath and a conical metal cap to direct or concentrate the blast.

Security analyst Juan Ibarrola, a specialist in the military, said that “what is worrying is the improvisation that they (criminal groups) are making with engineering, to create weapons, traps, explosives and others.”

Instead of trying to wage open war with the military, which they know they would lose, Ibarrola said that with improvised explosive devices and other devices “more than anything else, what they are trying to do is threaten and confront groups rivals”.

It is unclear whether improvised landmines are only being used by one side in the bloody turf battle for control of the state of Michoacán, which drug traffickers value for its seaport and smuggling routes, as well as the opportunity to extort money from growers. of the state. of avocados and limes.

In November, residents of the Jalisco-dominated town of Loma Blanca showed Associated Press reporters a small crater, with a round metal plate, where they said Tepalcatepec forces had detonated a landmine.

While cartel gunmen across Mexico have used hand grenades and rocket-propelled grenades against police and soldiers before, IEDs have been virtually unknown in the country’s drug wars.

In 2015, hitmen from the Jalisco cartel shot down a Eurocopter transport helicopter with a rocket-propelled grenade, killing eight soldiers and a police officer. While the choppers facing Jalisco now are Blackhawks, there’s no doubt the cartel can find something more shocking.

The Mexican government is rapidly running out of tools to control the expansion of the Jalisco cartel, the most militarily powerful drug gang in Mexico. The army has already unleashed some of its deadliest weapons in its fight against the Jalisco cartel: helicopter gunships equipped with mini-electric weapons, rotating barrel machine guns capable of firing thousands of bullets per minute.

But the people of Michoacán are also fed up with the army’s strategy of simply separating Jalisco from the Michoacán Viagras gang. Army policy effectively allows the Viagras, best known for kidnapping and extorting money, to set up barricades and checkpoints on many of the state’s highways. Limes, avocados, and cattle going out, or supplies coming in, must pay a war tax on Viagras.

The strategy of doing nothing appears to be part of President Andrés Manuel López Obrador’s “hugs, not bullets” policy to avoid confrontation.

“The difficult thing here is that there hasn’t been a forceful effort by the government to confront” the gangs, Ibarrola said. “That is serious, not because there is no capacity, the army is there and can do it, but the orders simply do not come.”

Meanwhile, the cartels have developed bomb-carrying drones, and the most feared warriors are the “droneros,” or drone operators. While initially rudimentary and dangerous to load and operate, and still worryingly indiscriminate, drone warfare has improved, and it’s not unusual to see metal barn roofs or sheds split open like cans by the impact of drone blasts.