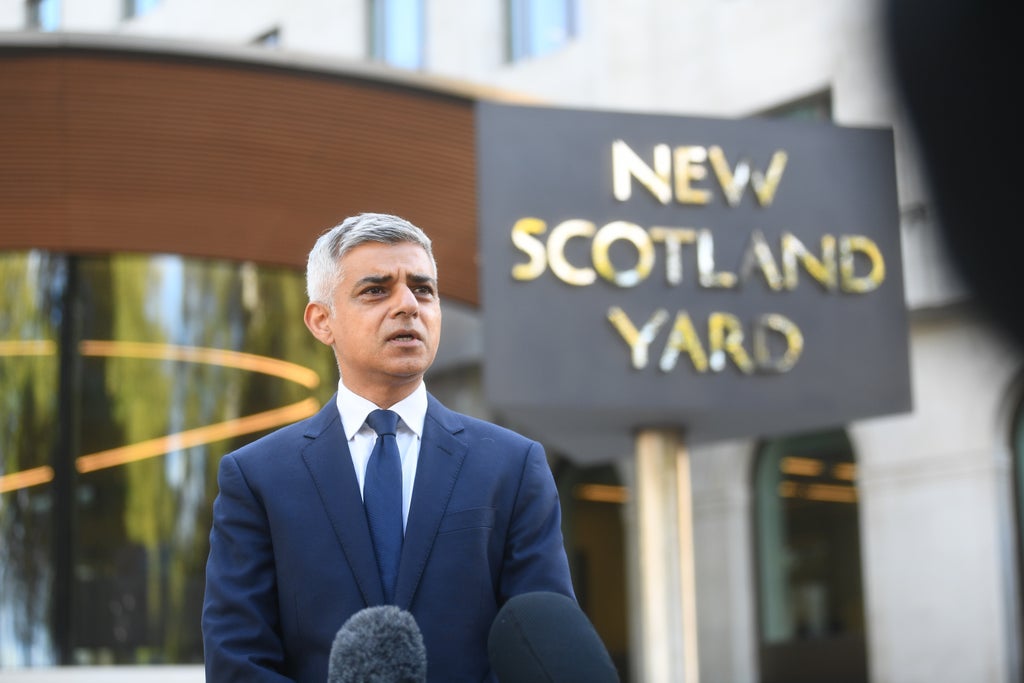 Campaigners have accused a police leader of “being in denial” about the need to tackle misogyny and racism, amid a backlash to the ousting of Dame Cressida Dick.

The Metropolitan Police Federation, which represents rank-and-file officers, declared “no faith” in London Major Sadiq Khan and accused him of undermining their work on Monday.

Without mentioning the murder of Sarah Everard directly, chair Ken Marsh said “the very small number of incidents that have hit the headlines over recent months” did not reflect the force.

“The hard work of our colleagues – and public trust in our colleagues – is being undermined by politicians and by the mayor of London in particular,” he added, hitting out at “scaremongering”.

“These officers are being unfairly lambasted for things they haven’t done. My colleagues are working day and night to keep London safe. To be all branded in this shaming and negative way – as they are being by some politicians and many sections of the media – is wholly unfair.”

Mr Marsh said horrific incidents should be “put in context”, adding: “We do not want these individuals in the job but the Federation will continue to speak up for our good officers.”

He said many were “saddened and angry” that Dame Cressida had been pushed out and insisted that the force’s culture had been changing.

The End Violence Against Women Coalition warned that the only way for Scotland Yard to rebuild trust was through accountability and a willingness to listen to survivors.

Deputy director Deniz Uğur added: “This amounts to yet more denial of the difficult internal work the institution needs to do to address its abundantly clear problem with racism and misogyny.

“The evidence is clear: these issues are systemic within the Met and police forces across the country, as evidenced by multiple police inspectorate and complaints body findings.”

One of the organizers of a vigil for Ms Everard, who was threatened with a £10,000 Covid fine after police refused to facilitate the event, urged Mr Marsh and his colleagues not to “close ranks” and instead publicly call out bad behavior and attitudes.

Anna Birley, co-founder of the Reclaim These Streets group, told The Independent: “Disaffection and distrust isn’t caused by campaigners and politicians calling out misogyny and racism.

“The mayor is right to expect better, women in London certainly deserve better.”

Mr Marsh’s statement was released during a misconduct hearing for a Metropolitan Police commander accused of taking cannabis, LSD and magic mushrooms.

Another Metropolitan Police officer, PC David Carrick, is to go on trial accused of rape and sex offenses against eight women later this year, while two inquiries triggered by Ms Everard’s murder are underway.

Dame Cressida’s resignation was sparked by a damning watchdog report on misogynist and racist behavior at Charing Cross police station. Mr Khan demanded a plan of action and told the commissioner he had no confidence in her leadership after reading her response from her.

She had rebuffed calls to resign in June, after a probe into the unsolved 1987 murder of private detective Daniel Morgan saw the Metropolitan Police accused of institutional corruption.

His brother, Alastair Morgan, told The Independent: “I’d say the Met have done a very good job themselves in undermining public confidence. Trying to blame someone else and supporting Cressida Dick is not the way back for the Met. The public wants root and branch reform of the police.”

The force has also recently been criticized for being slow to investigate the reports of parties in Downing Street and Whitehall in breach of Covid restrictions.

Members of the Metropolitan Police Federation were not balloted over the declaration of no confidence in Mr Khan, and the decision was taken by his elected executive.

Some officers questioned the announcement and what it would achieve, with one writing on Twitter: “While losing Cressida Dick was a mistake in my opinion, it wasn’t unsurprising, and while it’s good to see the Fed offer their support, I’m not sure this was the way to do it.”

A spokesperson for the mayor of London said a change of leadership was the “only way to address a crisis in trust” following a series of scandals exposing evidence of racism, misogyny, homophobia, harassment and discrimination.

“The mayor has always made it clear that there are thousands of incredibly brave and decent police officers at the Met, who we owe a huge debt of gratitude,” she added.

“But the series of scandals seen in recent years has tarnished the reputation of the police, which is so crucial to policing by consent. Downplaying the scale of the change required is only going to hinder, not help, the vital process of restoring Londoners’ trust in the Met.”

Dame Cressida is remaining in post while the next commissioner is selected by the Home Office, and the process is due to take several months.