“Dangerous” wind and heavy downfall has caused chaos across the UK amid Storm Dudley as Storm Eunice looms.

The Met Office issued a danger to life” warning with strong winds of up to 90mph amid Storm Dudley.

The storm could cause a danger to life on Wednesday, forecasters have warned, with the Met Office issuing an amber warning predicting “very strong and disruptive” winds which could cause widespread chaos.

Storm Dudley sparked a yellow warning for wind, which could disrupt public transport and power lines, is also in place from 6pm on Wednesday, covering all of northern and central England, most of Wales and southern and central Scotland.

Warning as Storm Eunice set to move in on UK 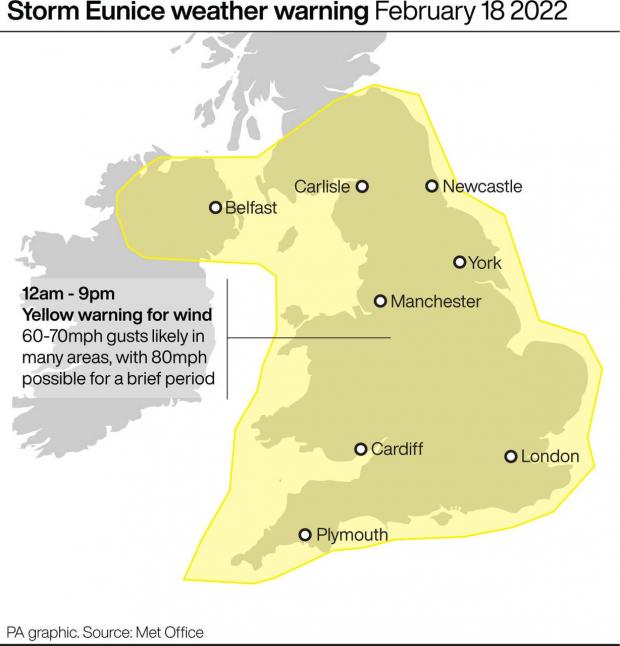 It comes ahead of Storm Eunice, with London North East Railway (LNER) warning customers with tickets for journeys between York and Leeds and London King’s Cross on Friday to move them to Thursday instead due to expected disruption and damage.

Snow and ice warnings were also in place until Thursday morning in northern parts of Scotland.

One person spoke of seeing a trampoline on a train track, while others posted pictures of unusual cloud formations.

Met Office forecaster Marco Petagna told the PA news agency: “There’s obviously been a generally blustery picture across the country with a combination of rain and hill snow in the north.

“Some areas have seen severe gusts of up to 81mph so it’s been a very windy day but that will start to slowly ease as we go into tomorrow.

“A new yellow warning of snow and ice has been issued for northern parts of Scotland and is expected to last into Thursday morning which could create some dangerous conditions on roads and paths.”

See the damage caused by Storm Dudley across the UK

Edinburgh was almost in “complete darkness” as Storm Dudley moved in on Wednesday.

Already seeing the impact of #StormDudley here in #Edinburgh almost complete darkness in the middle of the day 😭 #weather #storms #stormeunice pic.twitter.com/jg3VhxxmoN

In Manchester, part of a wall was blown over landing on a parked car.

Part of a wall has come down on a parked car in Salford. Thankfully no injuries. #StormDudley @MENnewsdesk pic.twitter.com/VzQr6RS1mL 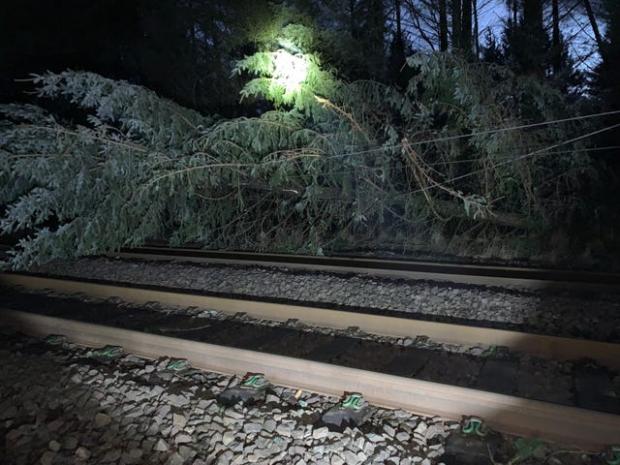 A train was blocked by a trampoline that had blown onto the tracks.

In Scotland, winds of up to 90mph brought down trees.

Another amber warning has been issued, with the potential for stronger winds, and predictions that likes could top 90mph in the South West and South Wales.

Mr Petagna said that Wales could reach up to 100mph in coastal regions.

The Environment Agency has warned of the risk of flooding in southern England on Friday.