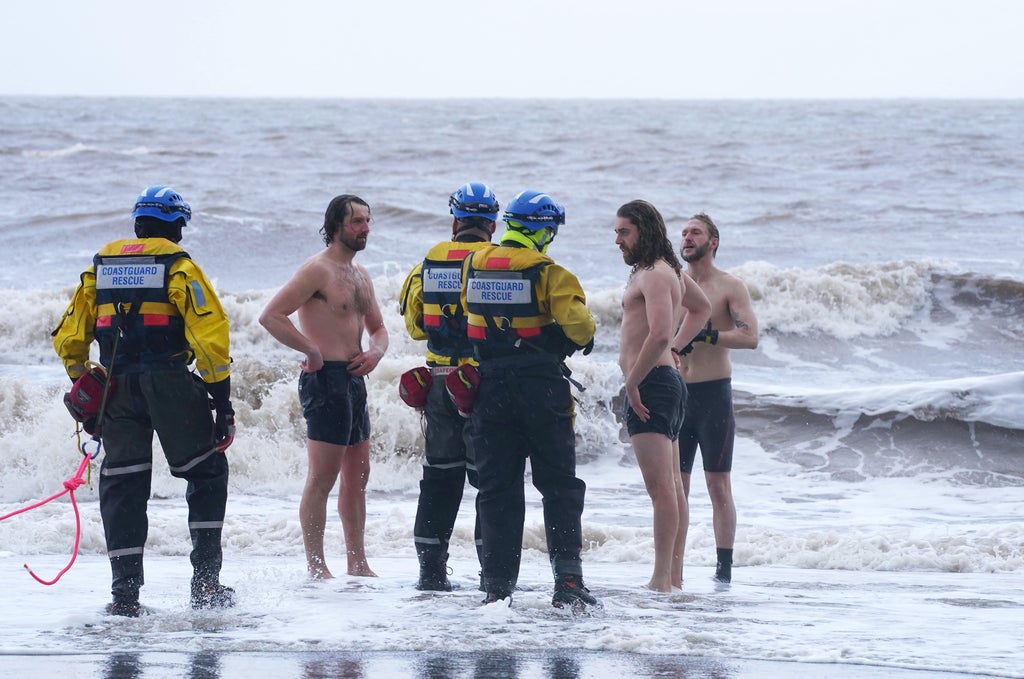 Weather watchers and thrillseekers have been urged to heed warnings about the extreme winds brought by Storm Eunice after people were spotted climbing onto seawalls and going for a swim.

In New Brighton near Liverpool, three men ignored safety warnings and went for a dip in the sea just as the storm hit.

They were pictured stripping off their trunks and getting into the water despite strong winds and high tides.

But after getting into the sea they were spoken to by the Coastguard, who asked them to get out of the water. The swimmers then got back into their cars and headed away.

Coastguard officers were stationed by the coast of the Wirral seaside resort on Friday and moved people off the promenade as the waves got higher after midday.

Merseyside is subject to a Met Office amber warning for wind, which is in place until 6pm, and advice from the Coastguard is to avoid coastal and exposed areas.

In Cornwall, the Coastguard and police warned people to stay away from the coast with reports of people climbing onto seawalls and swimming in the sea.

One woman was swept into the sea at Towan beach in Newquay before managing to get to safety with the help of people on the shore.

A spokesperson for HM Coastguard in Cornwall said storm watching “can be spectacular” but “trying to capture the most amazing shot is not worth putting your own safety at risk”.

Roy Stokes of the Environment Agency said it was “probably the most stupid thing you can do” to travel to the most exposed areas, with likes of up to 90mph expected on the coastline.

Mr Stokes told BBC Breakfast: “The worst possible thing you could do is go anywhere near these (coastal areas).

“I know people like to go and get photos and pictures, it’s quite a dramatic scene, but they’re far safer to watch it on the screen.

“It’s probably the most stupid thing you can do.”

I have urged people to listen to advice “and act accordingly”.

The Maritime and Coastguard Agency added: “Please stay well back from breaking waves as you could easily end up in the sea.”

Assistant Chief Constable Andy Valentine, who is leading the force’s response to Storm Eunice, said: “The Met Office’s red warning is still in place for South Wales, and people should only be traveling where it’s absolutely essential.

“Large waves are extremely dangerous, and going to take a look can put lives at risk – both your own and those of emergency service personnel.

“We’re asking everyone please to stay safe, and to stay at home.”

HM Coastguard Tactical Commander Ben Hambling said: “The reports we are receiving are absolutely terrifying. In these conditions all it takes is one wave.

“A dramatic photograph or selfie is not worth risking your life for and those who are going to the coast to take pictures are also putting our teams at risk.

“We are urging people in the strongest possible terms to stay away from the coast.”

On Wednesday during Storm Dudley, a man was spotted swimming in the sea off the coast of Ireland.

See also  How long it takes to see results when you start working out, according to top fitness trainer