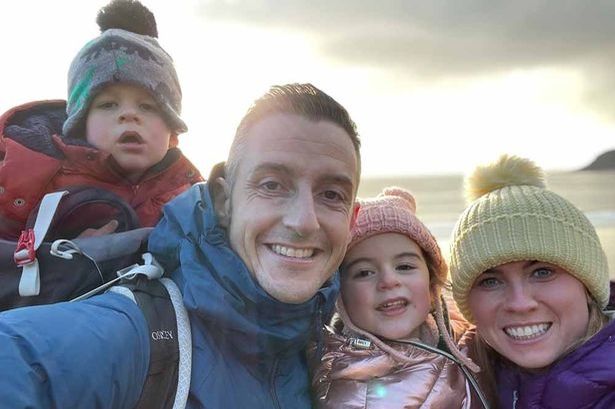 A dad suffering from post natal depression following the birth of his first child in 2016 has told how it nearly led to the breakdown of his marriage and left him suicidal.

Dan Stanley, 38, lives in Swansea, South Wales, with his wife Rachael Flanagan, 34, and their children, Sophia, five, and Spencer, three.

He said: “I wasn’t sure at first if my feelings were down to the fatigue of having a newborn, but it escalated beyond the baby blues.

“The standard tiredness became something much more sinister.

“But, being a man, I’d been conditioned to believe these messages that men have to be strong, silent, successful. It kept me in a place where I couldn’t even interpret how I felt let alone share that with my wife.

“It left me with this self-induced shame I just couldn’t get out of.”

During this identity crisis, Dan experienced “the best and worst day” of his life on December 6 2016, when Sophia was born.

Far from the picture of happiness he had envisaged for his family, he felt worse than ever.

He explained: “I was there for Sophia, practically. I wanted to be strong and help Rachael. But, inside, I just felt adrift.

“I was 6ft 2in, weighed 15st, was in great shape and won national sporting championships. But I was at my most fragile mentally.

“No one ever tells you how challenging it will be being a new parent. We’d done an antenatal course and all the focus was on the mother.

“Rachel and I fell into a spiral and were blaming each other for what we were and weren’t doing in the marriage.”

The couple tried marriage counseling when Sophia was four months old, but Dan felt he was “too far gone” and “stuck in a spiral of negativity.”

Falling deeper into depression, he said: “I couldn’t sleep. I couldn’t even interpret how I really felt”.

To combat this, he threw himself into exercising – waking up at 3 am to run a half marathon before starting work in his personal training business.

By the time their daughter was seven months old, Dan made the decision to leave the marriage and move out.

He discovered he was struggling with post natal depression
(

It was then, he said, that he realized the problem was not parenting, but his inability to communicate.

It was around this time that Dan began feeling suicidal.

He said: “I was internalizing all this shame and animosity towards myself. I’d gone from being a leader of men to not even being able to lead my own life.

“I couldn’t believe my life had imploded. I was just 33.

“I felt I’d done everything right to achieve fulfillment and success. But I was miserable and suffering in silence. I felt such a huge level of shame around it all.”

Come Christmas day 2017, all alone, having lied to friends saying he was busy and having jointly decided with Rachael it was best for him not to spend the day with Sophia, Dan ran 13 miles, came home and drank over a bottle of red wine .

But he reached a turning point as he impulsively began reading a self-help book given to him by a client.

He said: “I’d told myself I’d never read this book when she gave it to me. But then, all alone on Christmas Day, I started it.

“By page 50, I’d discovered something no one had ever told me. I could turn down the volume on the critical voice in my head.”

The next day, Dan and Rachael went for a walk along a local beach with Sophia.

He said: “Two young, healthy people, this beautiful baby all wrapped up in her carrier and our spaniel running around. We looked like a picture-perfect family. But we were thousands from it.”

Still, all was not lost and, over a meal in a pub that same day, the couple decided to begin the process of trying again.

Dan says he thinks his issues were created by a “perfect storm” of tough social expectations and personal experience.

He said: “I didn’t have a dad in my life growing up. My granddad was great, but he taught me the practicalities of life, not the emotions.”

He entered the military at the age of 18, rose through the ranks and won a commendation for contribution to commando forces.

But, after 11 years, he left in 2012 to join Rachael in her successful cleaning business, where she employs over 300 people.

But he struggled with the move back to civilian life.

Recalling how he was asked to identify the body of one of his soldiers who had been killed in a road traffic accident shortly before he left, he said: “I drove up the M5 pretty much in tears.

“At the time I thought it was grief, but now I realize it was also loss of my own identity.”

After a year and a half working with Rachael, Dan started working as a personal trainer, supporting athletes preparing for events such as triathlons and mountain climbing.

But he feels now that he was covering up his issues, saying: “I wasn’t sure what my goals were or who I wanted to become. I threw myself into work and exercise to avoid those existential questions I couldn’t answer.”

The idea that he may have postnatal depression (PND) was suggested to Dan during counseling and he is now committed to dismantling the stigma around male mental health that he says comes, in part, from men finding it hard to discuss their feelings.

He said: “I didn’t even know men could get PND.

“You just don’t hear about it. I looked it up after the session and was just like, ‘That is me’.”

According to the National Childbirth Trust, the UK’s leading charity for parents, one in 10 dads will experience depression during their partner’s pregnancy.

In November 2018, Dan launched BetterMen, a coaching practice where he enables men to become clearer on their purpose, in support of seeking fulfillment and happiness.

He has worked with men from all walks of life, from famous sportspeople to reality TV stars and top executives.

Happily, Dan says both he and Rachael, “worked on ourselves and on the marriage” and came to a place where they felt able to have a second child, Spencer, in March 2019.

And this time Dan – who hopes sharing his experiences will encourage more men to talk and seek help with their mental health if they need it – displayed no symptoms of PND.

For confidential support the Samaritans can be contacted free of charge around the clock 365 days a year on 116 123.