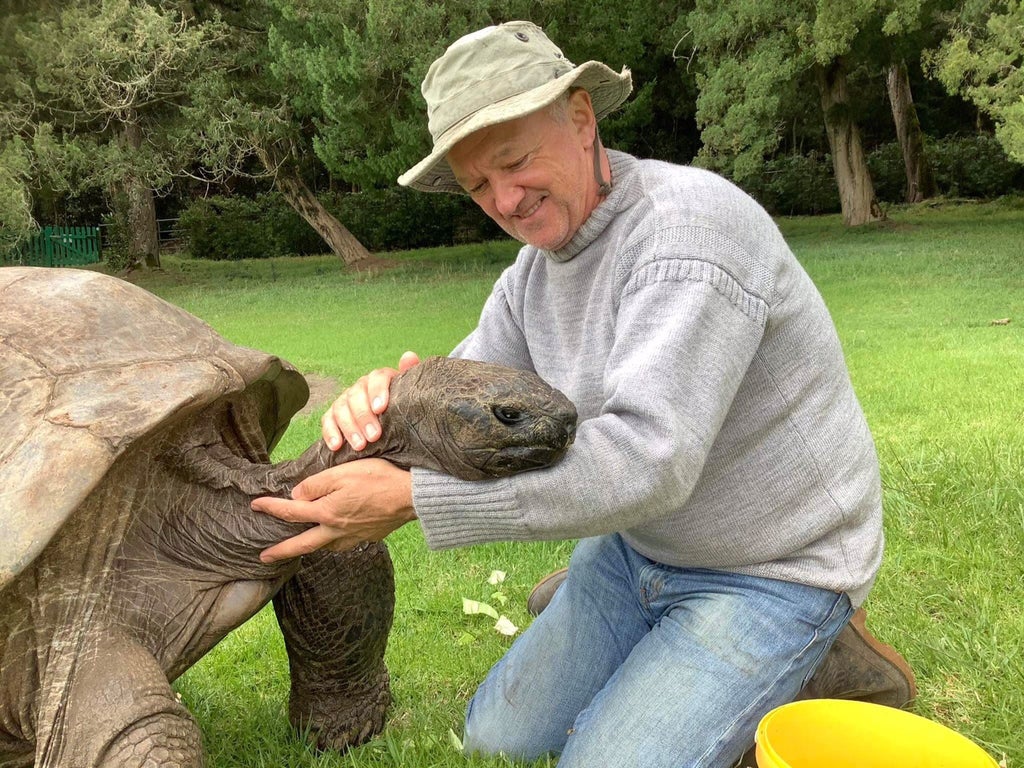 JNathan the tortoise has lived on one of the most remote islands in the world for 140 years. He has become something of a media star recently, as he just got a lofty distinction: the oldest living land animal in the world.

Jonathan is turning 190 this year. Well, that’s the best guess about the age of the 440-pound chelonian.

“To be honest, I suspect he’s older, but we can never know,” says Joe Hollins, the veterinarian who cares for Jonathan on St Helena island, a tiny volcanic British territory more than 1,000 miles off the coast of Africa.

Jonathan has spent most of his life wandering (albeit slowly) with three other land tortoises around the grounds of the St Helena governor’s residence, Plantation House.

Jonathan is estimated to have hatched in 1832, according to a letter that mentions he arrived “fully grown” on St Helena in 1882 from the Seychelles in the Indian Ocean, he says. “Fully grown” in turtle terms meant at least 50 years, Hollins says.

A photo taken between 1882 and 1886 shows Jonathan grazing at Plantation House, where he’d been presented to the governor of St. Helena as a gift, according to Hollins.

“It was quite traditional for (tortoises) to be used as diplomatic gifts around the world, if they weren’t eaten first,” he says, noting that they were harvested by ship crews because they were stackable and didn’t need food or water for days.

“Apparently, they were utterly delicious,” he says.

In addition to Jonathan, Hollins cares for the other tortoises who live on the 10-mile-long island. He also leads a team in looking after the island’s cats, dogs, cattle, sheep, goats, donkeys and pigs.

But Jonathan, as the senior gentleman in the group, is special.

“I take great delight in looking after him,” says Hollins, noting that at age 64 he is at least 126 years younger than the rare Seychelles giant tortoise he has tended to for the past 13 years.

“It’s a huge responsibility, but an honor and a privilege for a vet to see to the needs of the oldest known living land animal in the world,” he says.

There are likely sharks in the ocean older than Jonathan, says Hollins, but he hasn’t heard of another well-documented land creature that has been alive for more historical events.

Hollins says visitors to St Helena, which has a population of around 4,400, are awestruck to learn about Jonathan’s staggering life span.

The tortoise has seen 31 St Helena governors come and go and was likely alive for Queen Victoria’s coronation in 1837 as well as the inaugurations of 40 US presidents.

“While wars, famines, plagues, kings and queens and even nations have come and gone, he has pottered on, totally oblivious to the passage of time,” says Hollins.

“Jonathan is symbolic of persistence, endurance and survival and has achieved iconic status on the island,” he adds.

It isn’t unusual for giant land tortoises to live up to 150 years, says Hollins, but Jonathan has endured longer than most people expected.

The previous known longevity record was held by a radiated tortoise named Tu’i Malila, reportedly given to Tonga’s royal family in 1777. When Tu’i Malila died in 1965, she was about 188 years old, according to Guinness World Records.

Guinness recently updated its records to reflect that Jonathan is now the oldest land animal in the world, but news of the occasion was met the same way as most other things to the tortoise, according to his caretaker.

“He knows my voice and comes to me like a dog, but I have to accept it is mainly Pavlovian because he associates me with food,” says Hollins, noting that Jonathan is now blind and has lost his sense of smell, but still has a healthy appetite.

For more than a decade, he has hand-fed the tortoise carrots, cucumbers, apples and bananas, making sure to put on thick welder’s gloves to protect his fingers from Jonathan’s sharp beak.

“Even through (the gloves), I’ve lost two nails,” says Hollins. “But I really love this great, crusty reptile. He’s a gentleman of a tortoise.”

When Hollins was hired as a veterinarian by the St Helena government, he says, Jonathan was in ill health with a blunt, crumbly beak, and was unable to graze.

“He was grabbing at dirt and dry leaves and tugging on rank grass,” he says. “After feeding him for some time, we witnessed a miracle: his beak from him regrew its sharp edge.”

Hollins says he learned that the tortoise had a vitamin, mineral and trace element deficiency, which was soon corrected with a weekly intake of fresh produce.

“He’s been resurrected, so now we can’t stop,” he says, adding that Jonathan turns his beak up at kale, but devours lettuce hearts and sun-ripened pears.

The tortoise also enjoys sunbathing and has frightened visitors by sprawling on the grass with all four legs and his neck outstretched, he adds.

More than once, says Hollins, “Jonathan has fooled us into doing a rush visit because somebody has reported him dead.”

He says he knows the day may be approaching when a call like that turns out to be real.

“I’ve been here for four governors, and each one has said to me with a note of pleading, ‘Please Joe – not on my watch,’” says Hollins.

For now, St Helena is planning to commission a stamp featuring Jonathan and possibly have a national holiday to honor the tortoise sometime in 2022, he says.

“When he does go, it will be difficult, though we are realistic and prepared,” adds Hollins, noting that studies show giant tortoises don’t age like humans, but may simply wear out or die after an injury.

“With good care and attention,” he says, “Jonathan may yet see many of us in our graves.”