Bara Ndiaye, the man accused of stabbing his partner, the 25-year-old Senegalese Maguette Mbeugou, has recognized that he killed her, although he has assured that he acted in self-defense.

The alleged murderer has declared this Monday at the oral hearing that the crime is being followed in the second section of the Provincial Court of Bizkaia. The trial, which began on Friday with the election of the popular jury, continued today with the provisional requests of the parties and the declaration of the man. The charges call for up to 44 years in prison for Ndiaye, for murder, neglect of minors and habitual abuse.

The crime took place at the couple’s home on Ollerías Bajas Street, in September 2018, in the presence of their 2 and 4-year-old daughters. The girls remained for more than 24 hours alone next to their mother’s body until a neighbor realized what had happened. The woman denounced, up to two occasions, for mistreatment and threats to the man, but the complaints were archived.

Asked by the Public Prosecutor’s Office, the man has admitted having cut the woman’s throat, although he cannot understand how he received so many stab wounds: “I cannot tell about the fight or how he died. If he died it was my fault. I am guilty “, he has admitted although he has not wanted to describe what happened because it is difficult for him to tell it and he wants to” turn the page. “

As he has declared, it was the woman who entered the room where he slept with the two daughters at dawn with a knife (the accusation maintains just the opposite).

Likewise, Ndiaye has stated that when she left the apartment, abandoning the two minors and the body, he was aware that his wife was dead. He has not been able to explain why he did not notify an ambulance or the police. 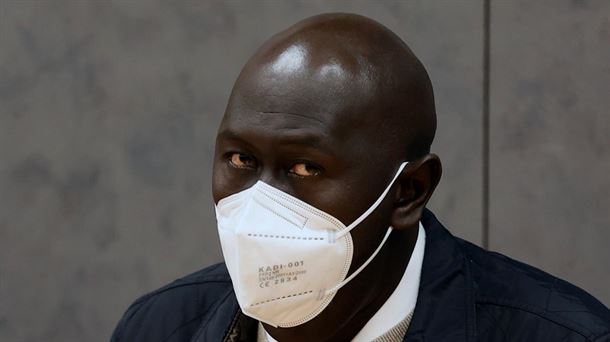 Up to 44 years in prison

Before the declaration, the parties have submitted their provisional requests. The accusations (there are four, in total) have differed in their writings, and have requested up to 44 years in prison for the accused.

The highest request corresponds to Bilbao City Council, who accuses the man of murder, neglect of minors and psychological injuries, and habitual mistreatment of the woman. Also ask for a compensation of one million euros for the victim’s family.

The private prosecution, represented by Jone Goirizelaia on behalf of the family, is requesting 36 years in prison. Prosecutor’s office and Provincial Council of Bizkaia They claim 25 years in prison, although for a different crime. While the prosecutor sees murder, the County Council considers it homicide.

As for the defense, he asks for eight years in prison for murder, although he establishes two mitigating circumstances. As he explained, his client acted “in self-defense because of his fear of the woman.” The defense attorney has asked the jury to give the defendant “a chance”.

At the courthouse gates, before the session started, the hermano by Maguette Mbeugou he has demanded that “justice be fair”, and has warned that the accused “lies”.