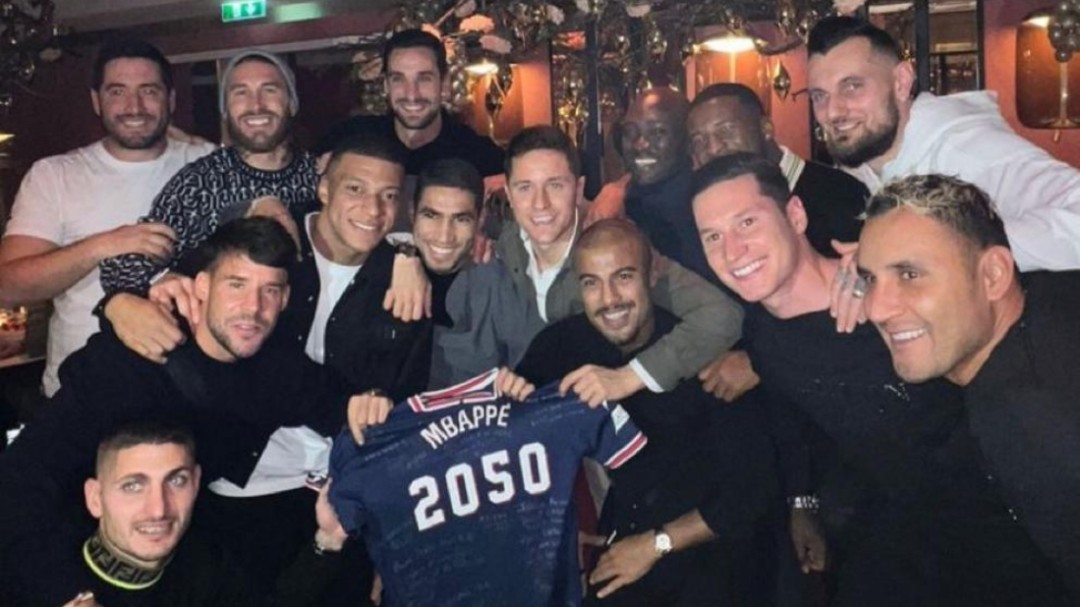 Kylian Mbappé turned 23 on December 20 and celebrated it in a big way with the rest of his PSG teammates. The Spanish Juan Bernat, Segio Rico, Ander Herrera and Sergio Ramos, along with Verrati, Achraf, Rafinha, Draxler and Keylor Navas did not fail the appointment of the French ‘7’. Juan Bernat himself published the photo on his Instagram stories. All of them gave the birthday boy a very special gift: his Paris Saint Germain shirt that said ‘Mbappé 2050’, simulating the typical one that players pose when they renew with their team. A poisoned gift? Mbappé does not seem to regret posing with him.

📷🇫🇷 Images of the birthday of Mbappé, who turns 23, are filtered

👕👀 The player poses with a “Mbappé 2050” shirt with his PSG teammates pic.twitter.com/wrYGQbBcHj

The departure of Mbappé from the Parisian team is on everyone’s lips since this summer the signing of the Frenchman for Real Madrid sounded very strong. The question is to know why the young forward is going to choose: to renew with PSG or to look for something else at the white club. There are not many other options. The player himself had on more than one occasion dropped his intention to “try something else” away from the Parque de los Principes where he plays every other weekend. However, he has also said on more than one occasion that he is happy in Paris. Leonardo, the club’s sporting director, is also doing his job and considers that “they still have a good chance of renewing.”

For their part, Real Madrid players are also putting pressure on the 23-year-old striker. Casemiro already sees him as compatibility with Vinícius Jr. (since many saw the signing of Mbappé as a stop in the progression of the Brazilian star) and Benzema, a teammate, gives him a wink whenever he can. This time he did so by congratulating him on the networks: “Happy birthday fumier de haut standing Mbappé (Happy birthday, high standing ‘cabronazo’, translated into Spanish)”. Vinícius did not miss an opportunity to congratulate his attacking partner next season. For now, his friends within the PSG squad are also pressuring him in the form of a gift. All of them will face each other in the second round of the Champions League.

Kylian Mbappé turns 23 pending his future and after having marked some historical milestones in France: