On the Day of this September 11, the protesters They have vindicated the Catalan Republic and have demanded the freedom of the imprisoned independence leaders and the return of the exiles.

One more year the independence movement has once again exhibited its strength with another massive mobilization, which on this occasion has crossed the city of Barcelona through a Diagonal crowded with ‘stelades’ flags, yellow ribbons and ‘fluor’ coral colored shirts sponsored by the ANC.

According to the data provided by the Barcelona Urban Guard, about a million people They have participated in the independence demonstration. On this occasion, the Delegation of the Spanish Government in Catalonia has not given participation figures, and Catalan Civil Society has quantified 200,000 attendees at the march.

The action programmed by the ANC for this year consisted of generating a great “sound wave” along the Diagonal, counting on the synchronization of those attending the mobilization.

After 5:00 p.m., following the instructions of the actor Toni Albà from a stage, the protesters were silent for three minutes, albeit disturbed by some shouts in favor of independence, and, exactly, at 5:14 p.m. A rocket has been launched, the explosion of which marked the beginning of the action.

The protesters have carried out a human wave on Diagonal avenue from Castillejos street to Palau Reial: a sound wave in which people went from silence to the cry of ‘Independence’ from the beginning to the end at the beginning of the demonstration, where there was a false wall that has been falling in parts with the symbolic thrust of the screams of the assistants.

The sections of the wall have been left standing with a ‘stelada’ painted and the word ‘Independencia’, another with a peak of Pedraforca, another with a ‘castell’, another with a woman with the word ‘Yes’ in several languages ​​on a yellow background, and another in which a girl had painted drawing graffiti on the wall where you could read ‘Catalan Republic’.

At the event, the figures for the 1-O vote and the police action were recalled; to the imprisoned political leaders and those who are abroad, and have criticized the attitude of the State: “This is not our State,” the actor Marc Martínez, one of those in charge of starting the act, shouted. 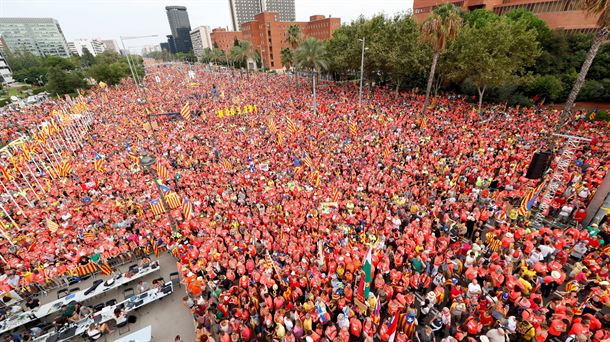 (The independence movement exhibits its strength in the Diada. Photo: EFE)

In her speech during the demonstration, the president of the ANC, Elisenda Paluzie, has demanded from the Government “rigor, honesty and determination” to continue advancing towards the Catalan republic, and has warned that independence will not come only with mobilization citizen.

Paluzie has criticized that the Catalan Executive has made mistakes that have not made it possible to achieve independence, and has claimed be prepared for another “democratic onslaught” to get a Catalan state.

The ANC leader has asked the Generalitat prioritize “the collective interest to that of the party”, take stock of what it has and what it does not have in order to achieve the republic and, above all, that it assumes responsibilities, since the ANC does not care that “everything has to be done by people from the street.”

“Treat us as adults. We are very aware of the difficulties and obstacles. We do not ask for the impossible, but we do ask for rigor, honesty and determination. With demand, perseverance and serene struggle, we will achieve the republic,” he proclaimed.

He has also asked that “the exile be united” with all the leaders who are abroad acting in the same direction, and, above all, that they do not return Catalan society to the starting box, that is, to the mere defense of autonomy and a better self-government, he said.

“Do not misappropriate everything we have done, the victories we have achieved, especially that of October 1,” concluded Paluzie, who regretted that the republic that the Parliament declared on October 27, 2017, did not become effective.

In addition, he has claimed Torra do not trust everything to achieve an independence referendum agreed with the Spanish Government, and has said that the ANC fears that it is “a permit that will never come”.

For their part, two lawyers for the sovereign leaders investigated in the cause of the independence process have called “State terrorism” that some are in provisional prison for fulfilling the mandate of a people.

The lawyer of the ex-minister Clara Ponsatí, Aamer Anwar, has criticized the judicial and police action of the State as of 1-O.

“General Franco would be proud of a state that acts like a Franco dictatorship”He has said, and has criticized the current Prime Minister, Pedro Sánchez, ironically calling himself a socialist.

The lawyer supports his criticism of State terrorism in which the Spanish Government “take hostages to negotiate”, in reference to the imprisoned pro-independence leaders.

He has labeled as “hypocrites” those who stood in solidarity with the Catalan people at the time of the August 2017 attacks in Barcelona and Cambrils (Tarragona) but not after the police action on October 1.

And he has also assured that the sentence of the trial of ‘La Manada’ had an impact on Europe and it was seen that “Spanish justice has a double standard”, and has called attendees to raise their voices for freedom.

Likewise, the lawyer for former president Carles Puigdemont, Ben Emerson, has warned Sánchez that he knows that “the only hope for a negotiated agreement (with Catalonia) is to free the prisoners now, today.”

For this reason, he has called on the protesters to raise their voices to send a message to the president of the central Executive: “You have one last chance to get things right. Before the trial begins: ‘Freedom for political prisoners.”.

He has also announced that, as the representative of seven of the nine prisoners to take their cases to the UN, he is convinced that this organization will make “a decision soon” in this regard.

On the other hand, the representative of Foreign Friends of Catalunya, Thomas Schulze, has assured that this is the “most important Diada of all generations since September 11, 1714”.

“Right here, today, we implement the mandate of October 1 and make a republic,” and added that the number of people in Europe supporting the independence movement is growing in Catalonia. 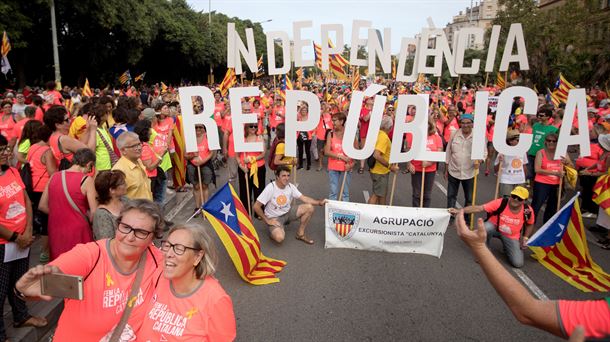 Torra has asked Sánchez for courage: “Courage to listen to the clamor of the Catalans, the peaceful and non-violent democratic clamor. And this is the march that we started, which has no limit, until the end, with all the consequences. “

“Here we held a referendum on October 1 and declared political independence on October 27. May Mr. Pedro Sánchez have the courage to see the clamor of the people of Catalonia. Or is it that Spain’s response will always be the same, whether it is Mr. Rajoy or Mr. Sánchez? “He asked.

He has also directed this message from commitment to the right to self-determination the vice president of Òmnium, Marcel Mauri, and the president of the ANC, Elisenda Paluzie, who has demanded from the Government “rigor, honesty and determination” to continue advancing towards the republic, because they consider that independence will not come only with citizen mobilization.