Skip to content
Home News Marta Ortega: how to survive her father’s legacy at Inditex | Economy 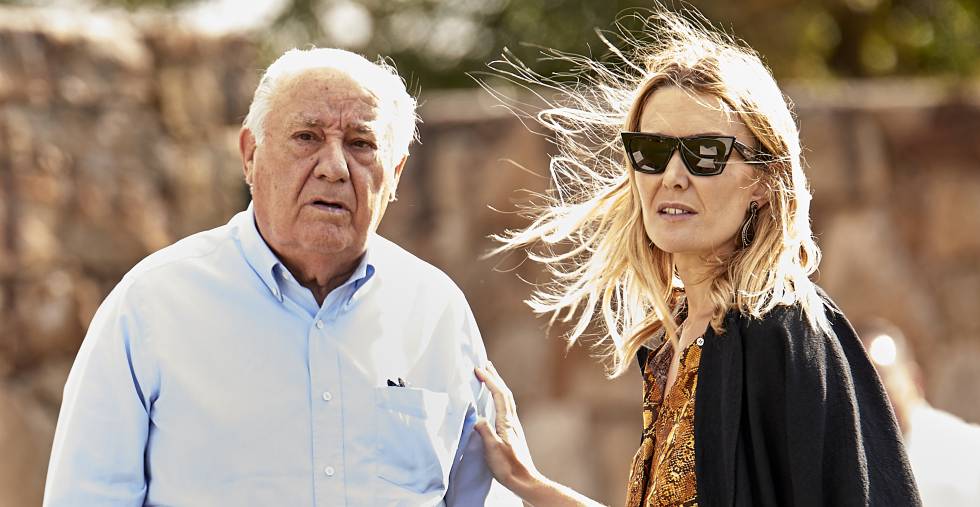 When Marta Ortega (A Coruña, 37 years old) turned 20, she lived in London where Kate Moss reigned, the woman who at the beginning of the new millennium dictated what the world was wearing. Before starting as a clerk at Bershka, she was studying at the European Business School, and although she lived in the exclusive Chelsea neighborhood, where many of the biggest names in international luxury are based, she still attended the mundane Spanish parties, with karaoke and raffles. of hams, on Great Portland Street, far removed from the circles of the jet set of fashion. It was 2004 and Harvard turned the business model of Amancio Ortega, who had revealed his identity for the first time only four years ago, into a case study: the scheme, based on the frantic opening of stores in all the great avenues of the world together With a pioneering and highly sophisticated data system created in collaboration with the Massachusetts Institute of Technology (MIT) to respond to customer requests in record time, it attracted the interest of the international business press.

That Inditex, still the mecca of basics with a touch of design created by her father, was very different from the one that she will now preside over from April. To begin with, then the group had not yet entered digital commerce, which it did not join until 2010. “They waited until they considered that they had developed the necessary capacities to be able to offer a shopping experience at the level of the one offered in their physical stores ”, explains Coro Saldaña, digital management consultant in fashion and distribution companies. In turn, Zara’s physical stores were not yet spectacular designer stores: “Now they are stores where the product, scarce and very orderly, is placed as in a luxury store. But in addition, they are technological nodes where you pick up or return your purchase online with a QR ”, specifies Paloma Díaz Soloaga, professor at the Complutense in the area of ​​intangibles and fashion management.

The product strategy has also radically changed. “If we traveled in the mid-2000s, Zara was full of replicas, sometimes without any complex, that cost at most 50 euros. The so-called jacket Balenzara, a fairly exact replica of one of Nicolás Ghesquière’s designs for Balenciaga in autumn spring 2007, is the best example of the strategy at that time ”, says Carmen Chachero, who began to carefully analyze the Inditex flagship garments 15 years ago. years on a blog that is now an Instagram account with 150,000 followers called Devil Wears Zara (The Devil wears Zara). She was one of the first to perceive that in 2015, by the work and grace of Amancio Ortega, the streets around the world were filled with an army of women dressed in a yellow chicken jacket. “The brand, which was inspired by the catwalks, begins to be copied by other brands low cost, which makes the garments to be seen on the street even more, an effect that today has been multiplied by the hand of brands such as Aliexpress ”. The appearance of viral garments meant the perfect integration between physical stores and the digital world. “Zara’s is the best example I know of a totally synchronized experience between the two worlds,” says Coro Saldaña.

See also  Door 8: Cocaine is not talked about here | Opinion

The opacity, the absence of advertising and the allergy to proper names in the teams have been such ironclad principles within the Inditex universe created by Amancio Ortega that when in 2017 Zara presented the photographer Steven Meisel on its website as a claim to sell its new collection, the industry knew something was changing. In turn, the fetish photographer of Madonna and Vogue Italy it left the glamor of the covers of high-end magazines to debut in the digital sale of a textile giant. Zara was no longer the go-to store to buy trendy basics; It had become a kind of hybrid between the intangible aspirational of the catwalk and the product accessible at street level, which also used advertising strategies identical to those of any brand.

“With the model that Zara proposed 20 years ago, based on the physical store and the speed of rotation, the company would have been dissected, it would have died of success. Before, it was their policy to maintain the absolute protagonism of the product: to have the best photographers and models but without mentioning them; now they incorporate big names from the world of fashion into campaigns and launches and convey a higher idea ”, says Díaz Soloaga, who explains that all these changes are partly a matter of Marta Ortega, who has been working and making decisions in the shadows for 15 years. . She herself, like so many girls of her generation, is an “Inditex creature” with a training in fashion as a result of her family legacy, but also of the sign of the times. “He has not only grown in contact with designers or pattern makers. Also, as soon as he could, he surrounded himself with top-level creatives and artists, ”says Saldaña.

The transformation of your social profile also has a lot to do with your evolution. If in her first wedding with the Asturian rider Sergio Álvarez Moya she was still a girl fond of horses who barely left her usual circle of friends from Coruña and equestrianism, in the second, with the model agent Carlos Torretta, in 2018, it was possible see a woman who had entered the glamorous world of her husband (who during his New York years had a courtship with the socialite Victoria Traina) and to be part of the first division of international fashion. As such, she invited her wedding dress designer Pier Paolo Piccioli, Valentino’s creative director, and Fabien Baron, the legendary art director who enhanced the image of Bottega Veneta or Dior before creating the latest Zara logo. .

This week, with the still recent appointment of Marta Ortega, Zara announced the launch of a collection of garments specially conceived for the Metaverse, developed with the small Korean cult brand Ader Error, and another of sophisticated printed coats, with a campaign by the prestigious Paolo Roversi and prices ranging from 300 to 500 euros. All just when a great retrospective exhibition of the late photographer Peter Lindbergh, the man who immortalized the legendary supermodels of the nineties (Claudia, Cindy, Naomi), but also the one who took the photos of the Ortega’s second wedding, who over the years has turned herself into a celebrity photographed by fashion and gossip magazines whose looks (always a mix of their own brands as well as high-end brands) are already as influential as those of Kate Moss herself.

Marta Ortega, unlike her father, a self-made man who, in his 2004 conversation with Covadonga O’Shea, the only in-depth interview he has ever given, lamented his lack of academic training, he studied at the most prestigious centers of the world, he speaks three languages ​​and, in the words of Paloma Díaz Soloaga, “he belongs to the 21st century, he speaks a digital language, he knows that the conversation is in networks and that if you do not create specific content and do not surround yourself with big names, you do not enter that conversation ”. However, he relieves the founder at a time of very different challenges than those his father had to face.

On the one hand, there is the complex management of the public profile of the new president of the company, very beneficial to promote the values ​​of fashion but completely unusual in family businesses: “In this type of company, discretion and austerity, the Commitment to effort and dedication are the key values ​​and that is not very compatible with leading a public life that attracts attention. The natural scope of the information they generate should be the economy and business pages ”, explains Daniel Lorenzo, professor at the Family Business Chair at the University of Coruña (UDC) and advisor to the Family Business Institute. Perhaps that is why Marta Ortega, who was on the cover of the magazine Hello! with his two weddings, he has chosen The Wall Street Journal to grant an interview for the first time.

On the other hand, Inditex has to face its own ghosts: with its dizzying production rates, it forced the entire industry to accelerate its cycles and educated several generations of women in the idea of ​​buying the latest fashion at an affordable price it was almost a right. “At the moment their problem is not maintaining the profit, because they have already shown that they know how to do it: they have even returned to the level of sales they had before the pandemic. The challenge is the waste they generate. Because its business model is based on constantly producing ”, argues Dana Thomas, journalist and author of Fashionopolis: the price of fast fashion and the future of clothing.

According to the company’s 2019 annual report, Inditex put 1.6 billion items on sale and that production rate has increased 15% every year since 2015. In recent years, the company has made efforts to be more sustainable. It has committed to all the energy it uses in 2022 to come from clean sources and to achieve net zero emissions throughout its value chain by 2040; in parallel, they have returned to work with MIT to research organic fabrics and develop innovations in recycling. “For two years, part of the variable salary of management positions has been valued based on how much progress they have made in terms of sustainability,” says Díaz Soloaga, “but they do not presume too much about it, perhaps for fear of being accused of greenwashing” [lavado de cara medioambiental].

Transparency with the workforce is perhaps the greatest obstacle that Marta Ortega must overcome. During the months of confinement, in 2020, other competing companies of fast fashion suffered a severe reputational crisis, as contract workers in developing economy countries mobilized with initiatives such as I made your clothes to announce that the textile giants had canceled their orders without paying the payments, although Inditex was cited among the few exceptions to this practice. This type of scandal does not go unnoticed by clients educated in the new fashion culture, who are informed, have changed their values ​​and demand to know who makes their garments and under what working conditions, which is not easy considering the sheer size supply network that a giant like Inditex needs.

The company promotes that its garments are made with sustainable raw materials and has a demanding code of conduct for the protection of human rights and the promotion of international labor regulations, with prohibitions of forced labor, child labor, discrimination, and abuse. and other guarantees. But it is a risk that is very present in the sector. In the words of Dana Thomas: “The planet and its inhabitants are interconnected. You can have all the organic cotton you want, but if it is collected by forced laborers, you still have a problem. “