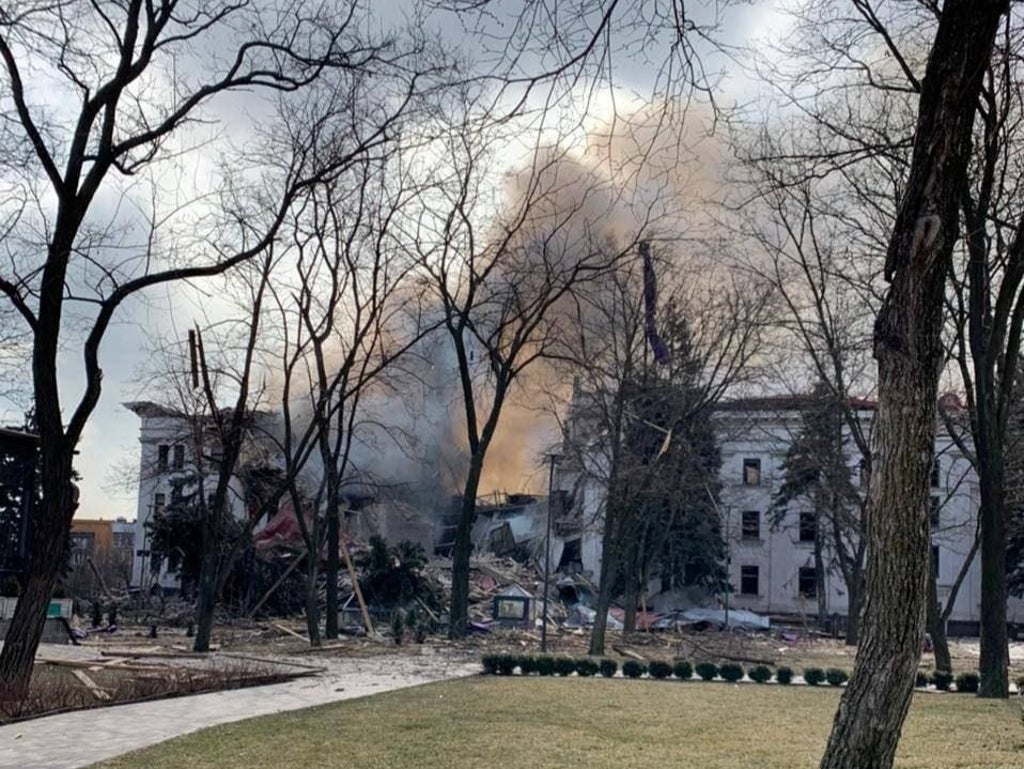 A bomb shelter in the Mariupol theater – bombarded by Russian forces in a potential war crime – withstood the blasts and there were survivors from the attack, officials in the beseiged city have said.

Early reports suggested that there were more than 1,000 people sheltering in the theater when it was hit, fueling fears that hundreds may have been killed in an attack which has been internationally condemned.

“The bomb shelter held. Now the rubble is being cleared. There are survivors. We don’t know about the (number of ) victims yet,” Mariupol mayoral adviser Petro Andrushchenko told Reuters.

He said rescue work was underground to reach survivors and establish the number of casualties.

One Ukrainian MP said people were seen emerging alive from the shelter as rescuers started to dig through rubble on Thursday morning.

The rubble had buried the entrance to the shelter inside the theatre, and it was not yet known how many people were killed or injured, said Pavlo Kyrylenko, head of the Donetsk regional administration.

“Now there are pregnant women and women with children under the rubble there,” he said.

The theater had the words “children” in Russian painted on a pavement outside the building, in an apparent attempt to warn those carrying out the bombing.

Ukraine has accused Russia of being responsible, to claim Moscow denies. Mr Kyrylenko said on Telegram that further air strikes had also hit a municipal swimming pool complex in the city where civilians were also sheltering.

The city has been under continual bombardment from Russian artillery for almost a fortnight and is encircled. It has become a grim symbol of Ukraine’s desperate suffering during the three-week long war.

More than 2,300 people had been killed in Mariupol before the theater attack and earlier this week, officials said up to 20,000 may have died during the continual bombardments.

Residents in the port city have described conditions there as a “living hell”, and have been left without food, power, forced to drink from radiators, and with many bodies remaining unburied.

Wednesday’s theater attack has been widely condemned and only hours after it occurred, US President Joe Biden called Russian leader Vladimir Putin a “war criminal”.

Describing the attack as “unspeakable inhumanity”, the British ambassador to Ukraine Melinda Simmons said the bombing was a “war crime”.

Poland’s deputy foreign minister, Marcin Przydacz, echoed calling Mr Putin a “war criminal” in comments to the BBC and said his forces are resorting to brutal tactics to break the nation.

“In my opinion the initial plan was to destroy the military infrastructure,” Mr Przydacz said.

“The Kremlin believed the government of Ukraine will evaporate somehow. That was not the case. Ukrainians are very brave defending their land and their values, their democracy, the country they built, they’ve been building for the last 30 years. So now Mr Putin decided to hit civilian infrastructure.”

Six nations have demanded a UN Security Council meeting on Ukraine on Thursday afternoon over the attack as a vote is scheduled on Friday to on a resolution demanding protection for Ukrainian civilians “in vulnerable situations”.

“Russian war crimes tribunal should not be held in Nuremberg or the Hague but in Mariupol or Kharkiv”.

Russian foreign ministry spokeswoman Maria Zakharova said on Thursday that the allegation that Russia had bombed the theater was a “lie”.