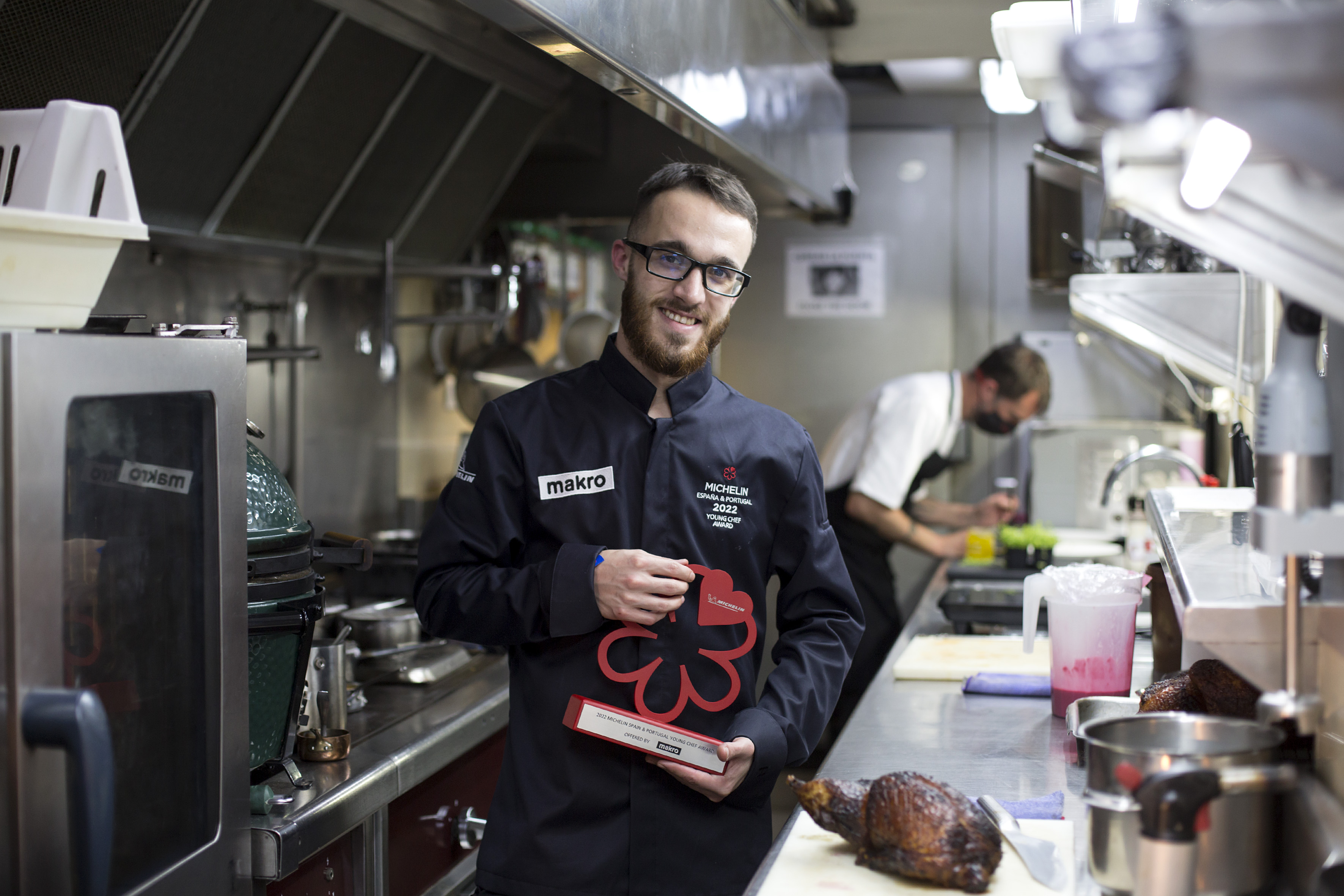 Slim, with a beard and plastic glasses, Mario Cachinero looks like a computer science student. He is an introvert, he listens more than he talks and the operating system he works with is the kitchen. With ingredients from Andalusia, it programs dishes that have been used by the Michelin Guide to recognize this 25-year-old from La Mancha as the best young chef, an award that was awarded for the first time. It is the final push for those who run the kitchen of Skina (Marbella), where he became the youngest chef in Spain to achieve two Michelin stars in 2019 ahead of names such as Dani García or Dabiz Muñoz. Today he continues tinkering with those same stoves surrounded by a team of twenty-somethings. “This award has a weight that I had not seen coming: it is being something incredible,” he said on Wednesday in front of a well-loaded black coffee to continue standing after a sleepless night overwhelmed by congratulations.

Ana Milan – presenter of a Michelin Gala where he was renamed “Mario Chacinero” – made an effort to give time to a young chef who was not expecting the award and, on stage, could hardly speak a word. Then he let go, thanking mistakes, the world, life, love. References as generic as they are concrete, because if during his short career Cachinero has traveled through Spain, Italy, France, Germany or Denmark in search of new flavors, his reference was at home: his mother, whom 24 hours after receiving the recognition he still he hadn’t called. “Then she tells me that I don’t remember her, normal,” he says, laughing and calmer, who savors with the words the “potatoes with rabbit without rabbit” that his grandmother used to make. “They had an incredible flavor,” says someone who has grown up on the luxurious Costa del Sol, but whose origins are almost 600 kilometers away in a humble La Mancha town.

In Carranque (Toledo, 4,865 inhabitants) he debated between sports or audiovisual studies until he found a third way. “I liked to eat and I decided that I wanted to learn to cook to make others enjoy it,” she recalls. At the age of 16, he enrolled in the middle grade at the Toledo Hospitality School and took away his fears and insecurities. From the age of 18, he combined the higher degrees of Kitchen Management and Restaurant Services Management for three years. He served as a waiter, washed dishes and put glasses. He worked in his parents’ cafeteria. He acquired temperance and on the weekends he trained with internships at Casa Elena (Cabañas de la Sagra, Toledo) or the starred El Carmen de Montesión (Toledo) and Casa Marcial (Arriondas, Asturias). “I ended up crushed,” he sighs. In those five years, he understood that cooking cannot be 16 hours of work a day (“from the eighth, nobody gives his best”) and, above all, he learned by doing what, according to those around him, he knows best do: listen.

When he was just 21 years old, he came to Skina as a kitchen assistant and soon became boss. The first year he kept the star of the restaurant and was recognized among the 100 young talents in Gastronomy by the Basque Culinary Center. In the following season, at 23, he got the second. “He was a kid presenting dishes to a very experienced clientele,” he says. “We have achieved very good things in a short time, but we have just made renovations and we have expanded the team to improve further. We still have a lot to do, ”he says with his feet on the ground. Do you dream of the third star? “It can be done, but the objective is to worry about improving everything, step by step, from organization to cleaning. If it is done well, everything will come ”, he affirms.

The chef relies on a young team that follows the advice of the greats and brings fresh ideas. They are a pineapple. “I don’t know everything, nor am I always right. We evolve together: I like people around us to try, add. I can teach them, but I have learned much more from them ”, points out who defines himself as a perfectionist and recognizes the role of Marcos Granda as Skina’s driving force. The Asturian sommelier and businessman accumulates stars beyond the Malaga establishment: to the one consolidated in Clos (Madrid), he has now added Ayalga (Ribadesella) and Nintai (Marbella), which opened in spring under the orders of another young man, Pablo Olivares, from 28 years. “The key is in the teams that surround me, they are the important ones,” says Granda, who defines Cachinero as someone noble, perfectionist and who thrives on others. “Above all, he is a normal guy, something difficult to find in this world of egos,” he highlights.

“Marcos has given Mario the prominence he needed,” sums up Pilar Candil, a gastronomy specialist and promoter of the ChefsForChildren solidarity events, where Cachinero collaborates. “You don’t see his youth in his dishes,” says Candil. “He has a brutal talent, clear ideas and is very mature. With 25 years he has made an amazing cuisine “, remarks Benito Gómez, chef of Bardal (Ronda, two stars) who emphasizes Cachinero is an example that” in the south there are very young people who are doing it wonderfully “and indicates that the explosion of Malaga – accumulates nine stars – and Andalusia – reaches 23 – is a direct consequence of the fact that the region has “the best pantry in the whole country”. It is just the idea that Mario Cachinero defends from Skina. “Sardines, payoyo cheese, ajoblanco, salmorejo… It is about turning traditional recipes into haute cuisine, about surprising without forgetting aesthetics. There is no more ”, explains the young man while finishing his coffee. “It’s time to join the night service,” says who, now yes, picks up the phone to call his mother.

Dani García: “The panorama has changed a lot in Andalusia”

Surprised, Dani García did not expect that just six months after opening Smoked Room in Madrid he would get two Michelin stars directly. “I did not perceive that they would notice us so soon”, says the Marbella, who aspires to everything: “The restaurant has a high level, different connotations and a magical point that our three stars did not even have”. Its only thorn is that the space is not in Marbella, its home, a city that accumulates five stars. “When I got the first one in Tragabuches (Ronda) in 2000, it was the only one in Andalusia. The panorama has changed a lot in two decades with young talents like Mario Cachinero ”, adds who returns to the Michelin Guide two years after the closure of the restaurant that bore his name and the turn towards a much larger gastronomy project, Grupo Dani García. Last week he opened Casa Dani and El Pollo Verde in New York. And in 2022 it will be the turn of Lobito de Mar in Doha, La Chambre Bleue in Paris and Leña in Miami, where he outlines another Lobito de Mar. “I hope I have time to fulfill my dream: open a hamburger joint,” he concludes.