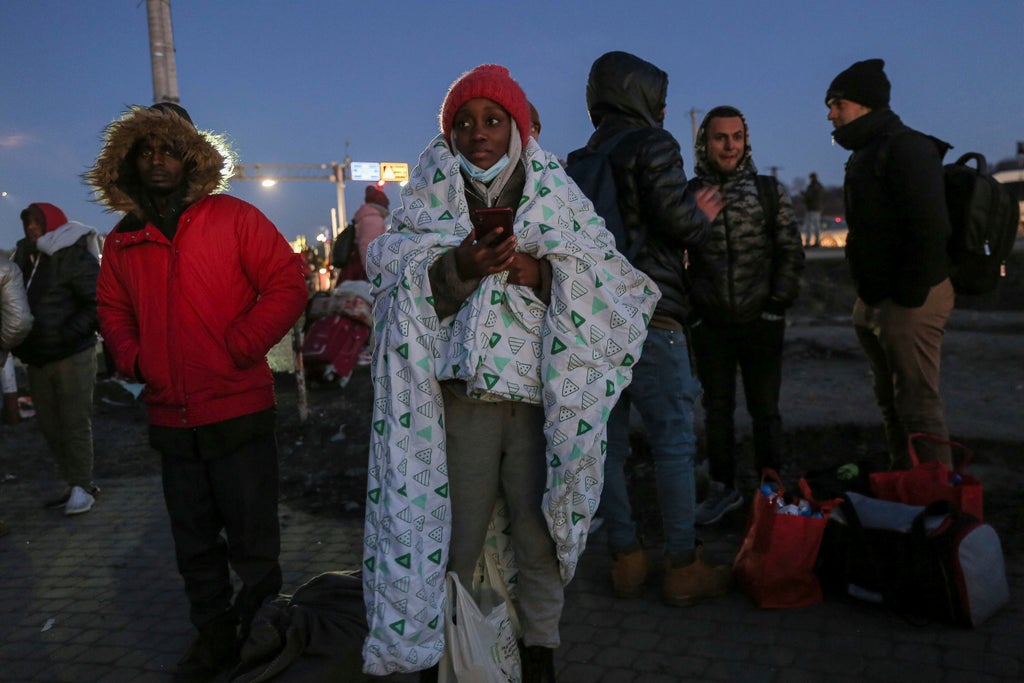 All day long, as trains and buses bring people fleeing Ukraine to the safety of Polish border towns, they carry not just Ukrainians fleeing a homeland under attack but large numbers of citizens of other countries who had made Ukraine their home and whose lives have also been upended.

In Przemysl, a town near the border which is the first stopping point for many refugees, there is a visibly large number of Africans and people from Middle Eastern countries.

Ahmed Ibrahim, a 23-year-old Egyptian, arrived carrying his cat in a carrier late Friday, feeling stunned and sick after days of travel. He said he had been studying medicine in Ukraine for five years and had only one year left. He had no idea what his future holds, not even what his next steps are. “What should I do?” he said.

Earlier a Pakistani man got off a bus that had come from Lviv in western Poland in a supermarket parking lot that is the arrival point for buses. Shaking in the cold he told a volunteer that he wants to go to Germany but he has no money. The volunteer asked him if he wanted to be taken to Krakow, a Polish city that would bring him closer to Germany, and he said yes.

The UN refugee agency said Tuesday that some 660,000 refugees had already fled from Ukraine into neighboring countries.

“This figure has been rising exponentially, hour after hour, literally, since Thursday,” agency chief Filippo Grandi told the United Nations Security Council. “I have worked in refugee crises for almost 40 years and I have rarely seen such an incredibly fast-rising exodus of people — the largest, surely, within Europe, since the Balkan wars.”

Most go to Poland, a European Union country that is already home to many Ukrainians who came to work in recent years.

The UN believes up to 4 million refugees could leave Ukraine if the war deteriorates further.

Polish UN Ambassador Krzysztof Szczerski said that people of some 125 nationalities had been admitted from Ukraine on Monday morning alone. Most were of course Ukraine. But other nationalities that made up at least 100 people each were: Uzbek, Nigerian, Indian, Moroccan, Kazakh, Pakistani, Afghan, Polish, Belarussian, Iranian, Turkish, Algerian and Russian.

Some non-Ukrainians have complained that they have waited longer in line than Ukrainians and in some cases felt treated poorly.

Kaneka Agnihotri, an Indian student who has lived six years in Ukraine, walked six hours without food to the Shehyni border crossing. There, she said, Ukrainian guards humiliated her and a group of other Indians, telling them to stand up and sit down over and over again and getting close to them with guards.

She told the AP that her group later moved to a different border crossing where they were treated well. Once in Poland, the Poles did everything to help.

There have been some reports that Africans in particular have been treated badly by Ukrainian guards.

Cihan Yildiray, a 26-year-old from Turkey who has been working in Kyiv, said Ukrainians passed through the border checkpoint more easily. He said he saw Black people and Arabs being beaten by Ukrainian guards.