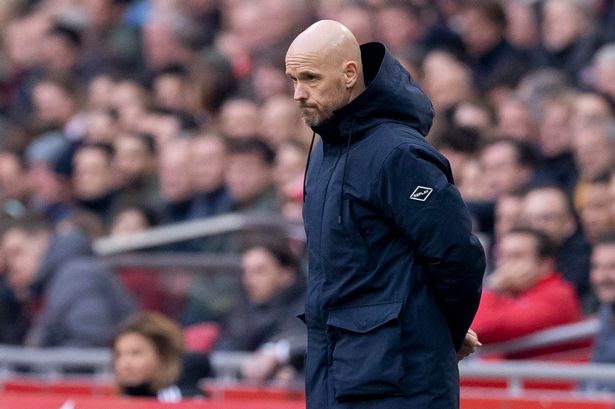 Manchester Evening News understands that Ajax head coach Ten Hag has been interviewed by United regarding the vacant manager position at the club. Many fans will be hoping if the Dutch manager is appointed it will be a step in the right direction to get the club back to the top of English football.

But, according to a former Ajax manager, Ten Hag is not a magic bullet and will need time to instill his philosophy into the players and to assemble a squad that is able to play his style of football. But like all managers, he also has flaws that he will have to try and work out of his game.

Ajax were recently knocked out of the Champions League by Benfica in an upset which left many fans frustrated. The Dutch giants were unable to score against their Portuguese counterparts despite having the lion’s share of the possession amid concerns Ten Hag’s favorites in the squad were starting to feel the effects of a long season.

Former Ajax manager Aad de Mos was speaking to the Kick-off podcast (via FCUpdate.nl) after the defeat and said: “It is to be hoped for Ajax that the players who are not in shape, will nevertheless get into shape. Antony , Dusan Tadic, Steven Berghuis, those are the guys who are in a bit of trouble at the moment.”

Many United fans will remember the same criticism was leveled at Solskjaer during his time at Old Trafford, as players such as Marcus Rashford, Harry Maguire and Luke Shaw to name a few were overplayed due to their key status in the Norweigan’s eyes. And the familiar criticism continued as the De Mos said: “I think that Ten Hag does not read the match well, as always.

“It takes far too long before he strikes with his substitutions. He already did that too late in Lisbon and now again. Brian Brobbey should be brought in much earlier. You didn’t have to substitute [Sebastian] Haller, but if you could have just added him as an extra striker, they would have been in trouble.

“You also have to show some guts in these kinds of games and not hide in your dugout. You have to have some fire show up, get to that line and stir things up a little bit when things get messy in the field. And that was it. You helped Benfica into the saddle by playing the game they like. It’s all too noncommittal at Ajax.

“It’s always fun, always fun, I don’t like that. You have to be a little harder on each other too. A war is never made. Ten Hag must also dare to intervene and put players on the bench to indicate that it cannot go on like this.Tadic can also be substituted sometimes, right?”

A common criticism leveled at Solskjaer was making substitutions too late to have an impact upon the game. Such concerns have leaked into Ralf Rangnick’s tenure as well.

Though United will be getting one of the best possible managers in Ten Hag, he will still be learning on the job, which is common. The Pep Guardiola of 2018 is a completely different coach to the one who currently sits in the dugout in 2022.

Overall, it is something that the Dutch manager will need to work on. With more resources at his disposal, perhaps he will be able to trust his squad enough to make more regular substitutes. However, if he continues to avoid making changes, it could spell trouble in the long term at Old Trafford.