Ralf Rangnick won’t face the same consequences for failure against Watford as his predecessor Ole Gunnar Solskjaer but it was nevertheless a damaging blow to Manchester United’s Champions League aspirations.

Only three of United’s 22 shots were on target as Watford picked up a valiant point in their relegation battle.

Stand-in skipper Bruno Fernandes spurned three wonderful opportunities while Cristiano Ronaldo went through his repertoire of tantrums as his poor scoring run was extended to one goal in 10 games. 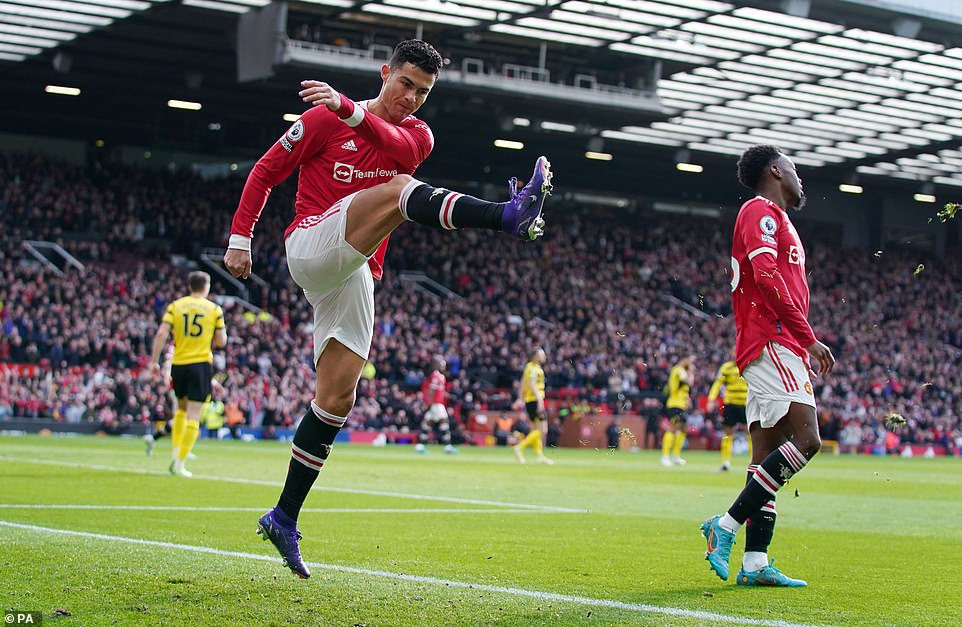 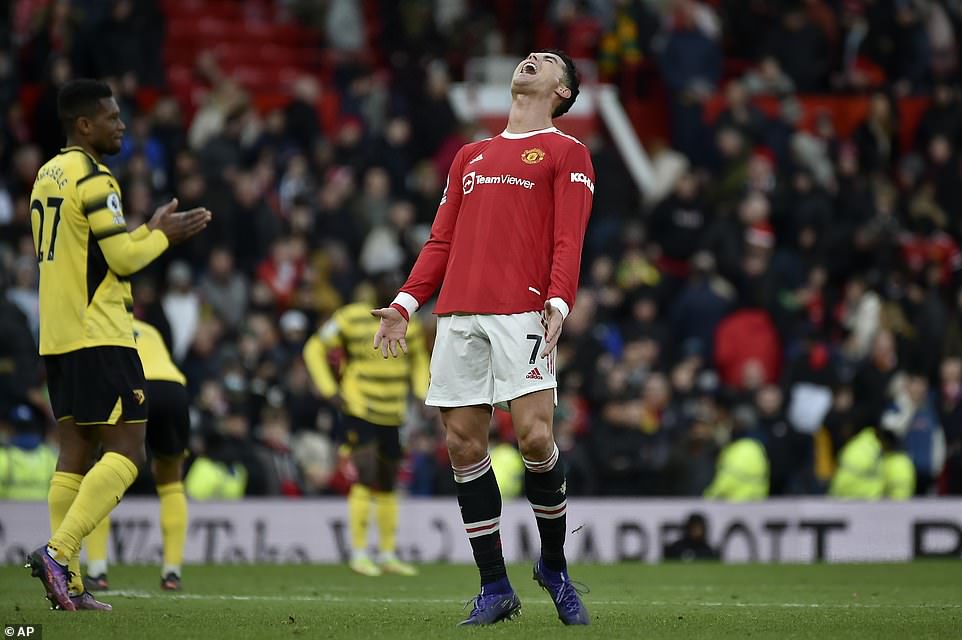 Rangnick, who had described it as a must-win with away trips to Manchester City and Liverpool next, ended with a front four after making bold substitutions, but to no avail.

They are still only two points ahead of fifth-place Arsenal but have now played three games more. At least they don’t have to face Roy Hodgson again this season. The 74-year-old Watford manager is unbeaten in his last four visits to Old Trafford.

‘It feels once again like two points dropped. We should have won,’ said a despairing United boss afterwards.

‘We did everything except from scoring. We had enough chances but we didn’t take them in a very important game.

‘We had four opportunities in the first half and it was similar in the second half. We dominated the game completely apart from the last five minutes.’ 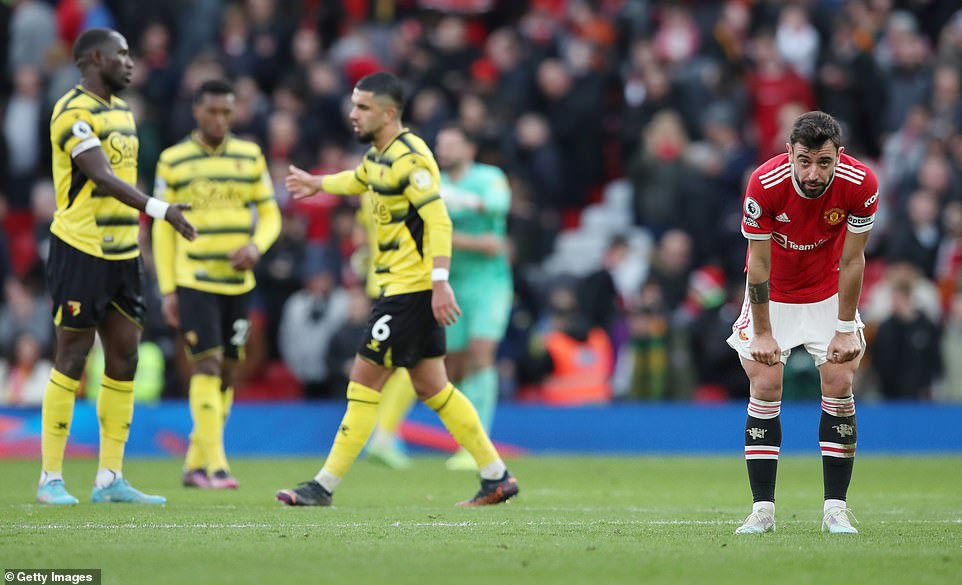 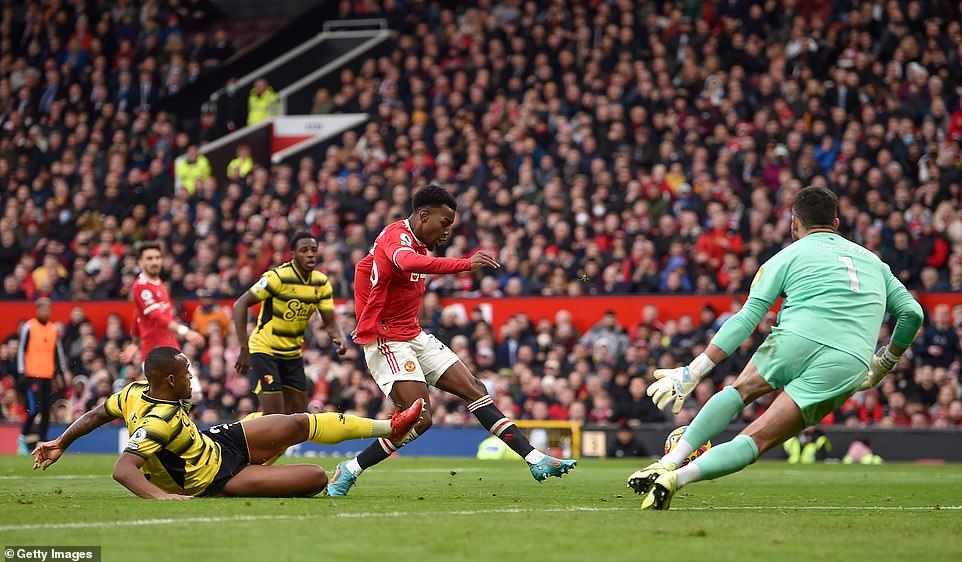 United have been beaten only once in 15 games under Rangnick since a 4-1 defeat at Vicarage Road in November cost Solskjaer his job. But the boos that greeted the final whistle underlined the mood is still unhappy.

The home side could have wrapped up the points in the opening 20 minutes.

Ronaldo produced a great first touch in the box before clipping the post. Fernandes had only Ben Foster to beat when set up by Anthony Elanga but his shot from him was blocked by Foster’s outstretched left arm.

The strategy was clearly to get in crosses from the left. Fernandes set up Ronaldo from that side but the goal was ruled out for offside. Fernandes himself made a run into the box but from six yards he hooked Paul Pogba’s pass wide.

Watford weathered the early storm to please Hodgson enough for him to give an encouraging thumbs up from the technical area. 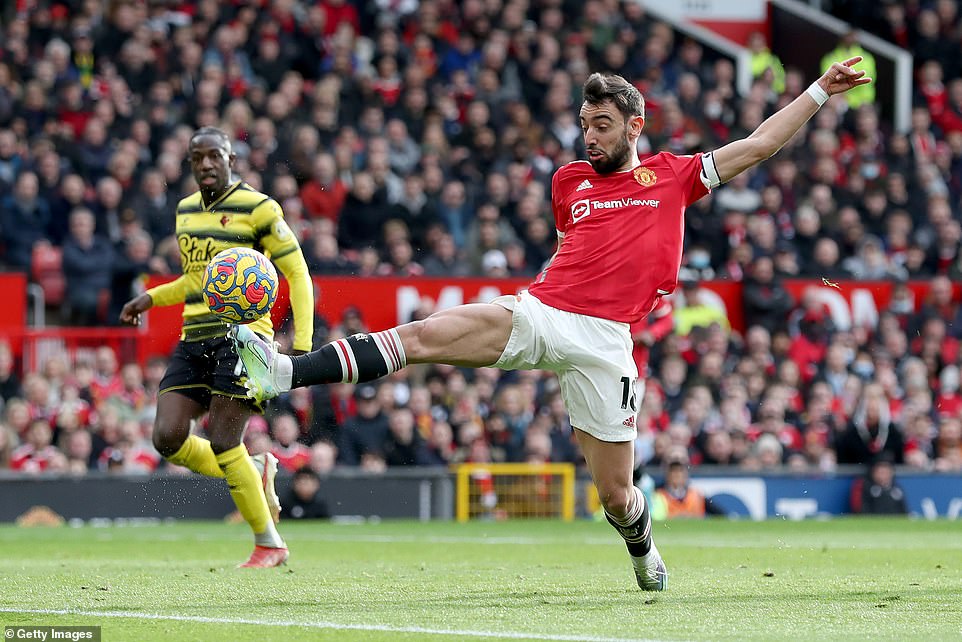 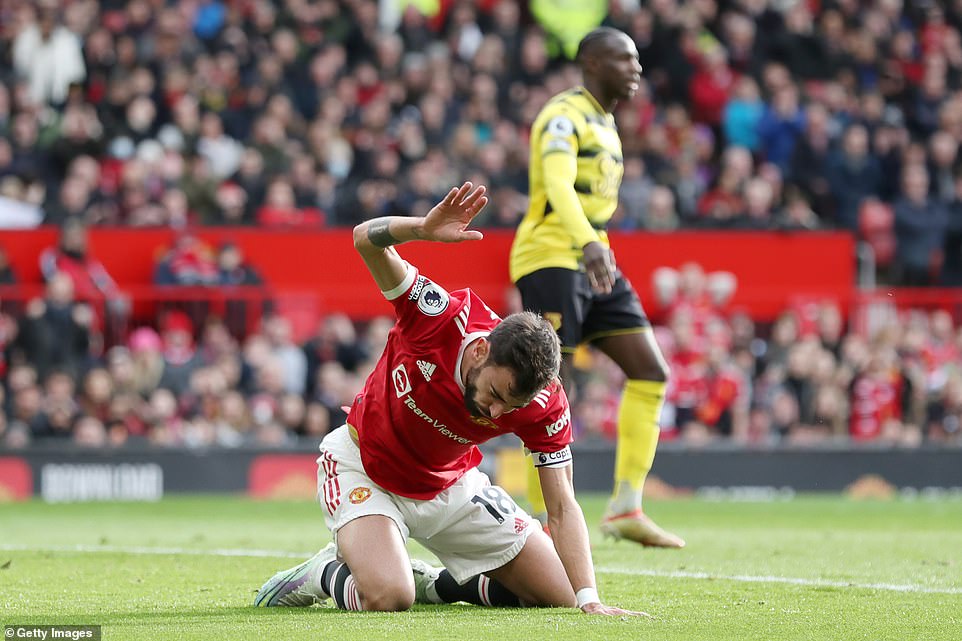 United had to wait until the 27th minute for another good opening. Craig Cathcart’s slip allowed Ronaldo to round Foster but with the angle too tight, he dinked a cross towards the far post where Fernandes headed over.

Ronaldo’s frustration was shown moments later when he was unable to take advantage of a Foster spill and waved his arms about in frustration.

He put in the second half when he didn’t get a penalty following Hassane Kamara’s challenge from behind. By the 67th minute, when Christian Kabasele deflected the ball onto his leg and it rolled gently towards Foster, Ronaldo was laughing at the injustice of it all.

Though Watford lived dangerously, they showed plenty of fight and effort to suggest their ambition to stay in the Premier League is not a forlorn hope.

There was a perfectly-timed tackle by Craig Cathcart which robbed Elanga though the youngster also called for a spot-kick. Emmanuel Dennis could have even given them a surprise lead when David de Gea saved the visitor’s first effort on target after 53 minutes. 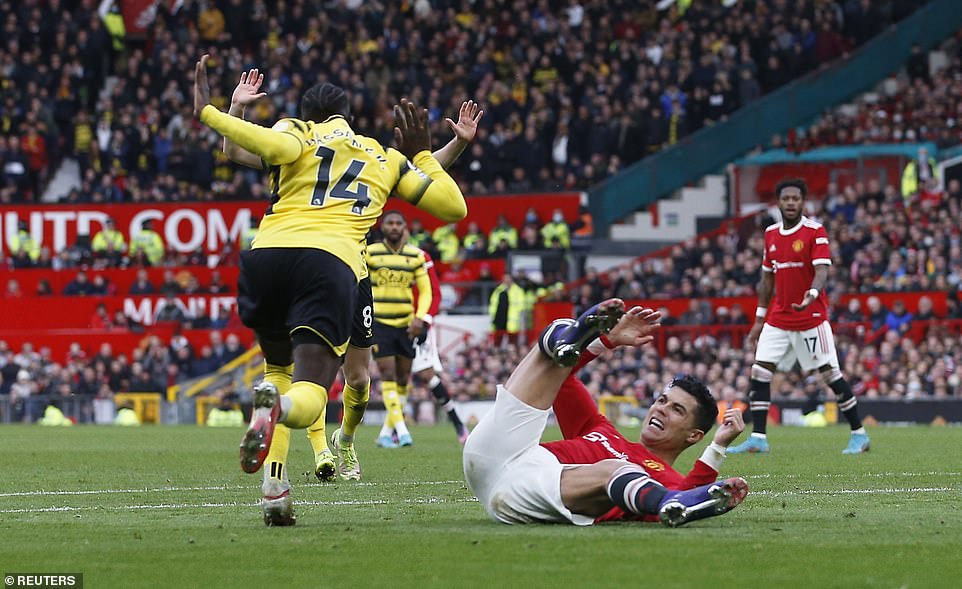 Despite strong appeals, play was allowed to go on as Watford continued to frustrate the hosts throughout the afternoon

Elanga missed a glorious opening for United after Paul Pogba’s flick had put him clear before Rangnick went for broke, having originally rested some of his regulars.

Jadon Sancho, who was on Watford’s books between the ages of seven and 14, was the first to be introduced with Marcus Rashford later joining him as United ended with all-out attack; Ronaldo and Rashford down the middle flanked by Sancho and Fernandes.

See also  "This is the end of the Putin regime, it is his political tomb"

If anything it was too frenetic with Pogba the sole holding midfielder. Ronaldo’s shot was blocked by Kamara, Fernandes stopped by Samir and then Sancho placed a cross behind his two strikers who were too eager to run into the six-yard box.

‘I think we dealt with the pressure quite brilliantly,’ said Hodgson after overseeing his third clean sheet since arriving just over a month ago.

‘United are blessed with some superstars but our hard work, determination and desire meant we leave with a very important point. 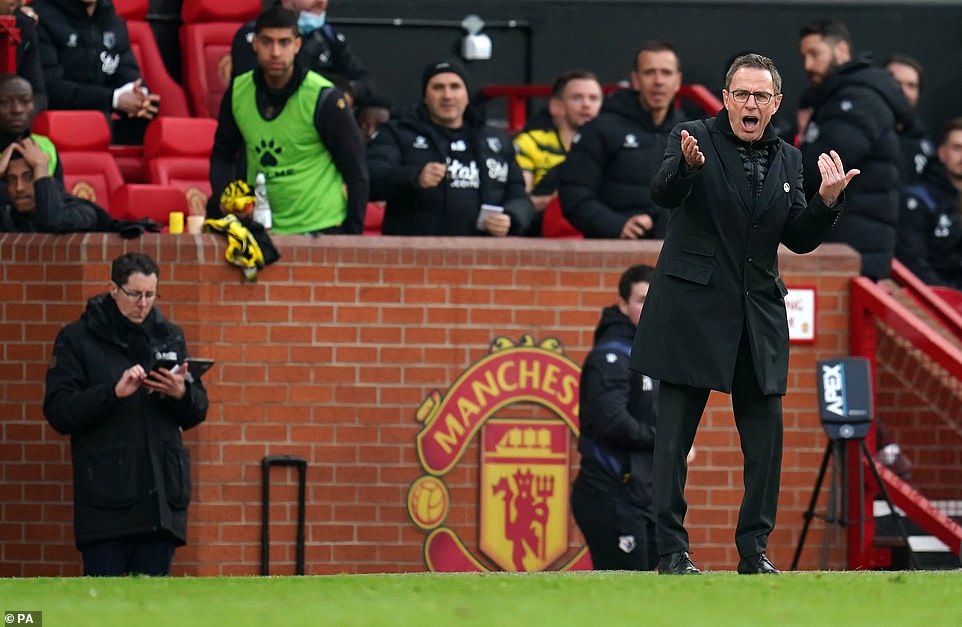 Although difficult to beat, Ralf Rangnick’s side keep dropping points and it is harming their bid to secure a top four place 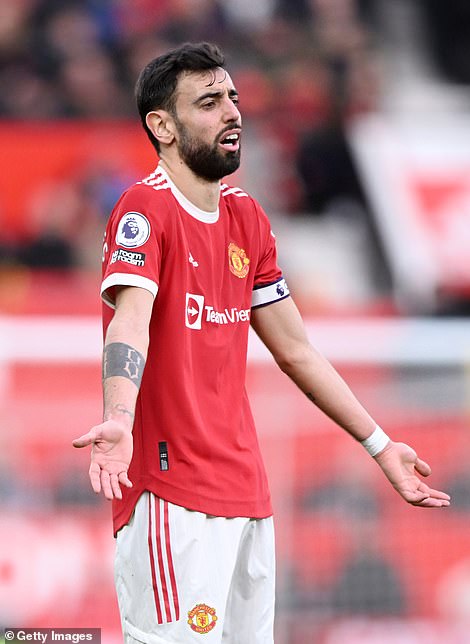 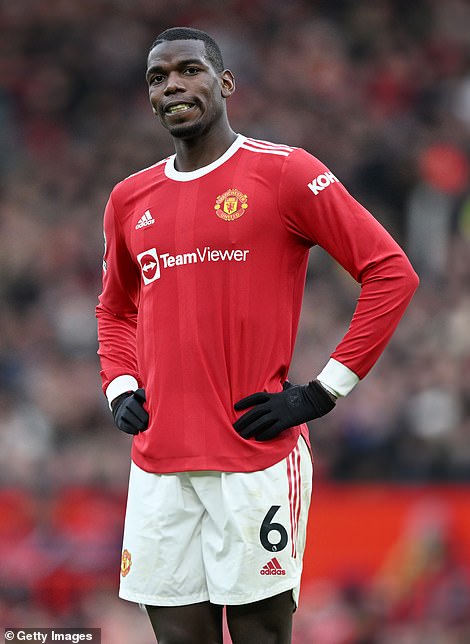 ‘We closed the gaps that the top teams in the country are so good at finding. It wasn’t rocket science but it took a lot for the players to produce that performance.

‘We have players who can score a goal for us but the quality of our passing when we got into good positions could have been better.’

Regular skipper Harry Maguire was left on the bench yesterday to keep him fresh for United’s big upcoming matches against Manchester City next weekend and then their Champions League tie against Atletico Madrid.

United players posed in front of a “peace flag” in solidarity with Ukraine before kick off. The home-made banner was understood to have been drawn up by Rangnick’s family with the club supporting their manager’s wish to make a statement of support. 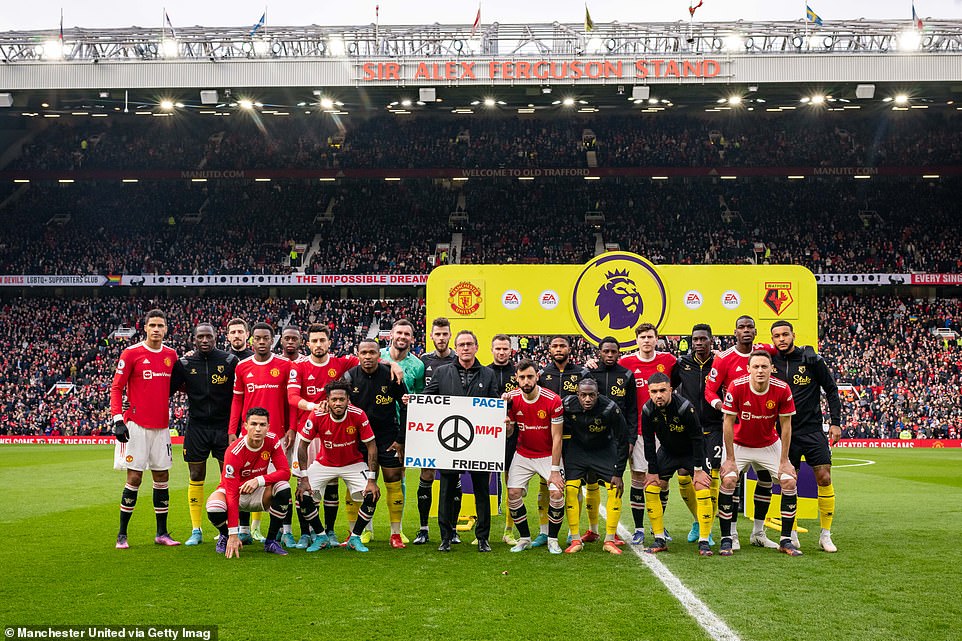 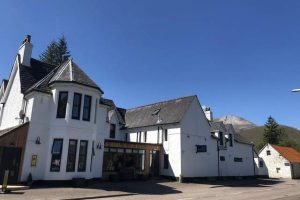