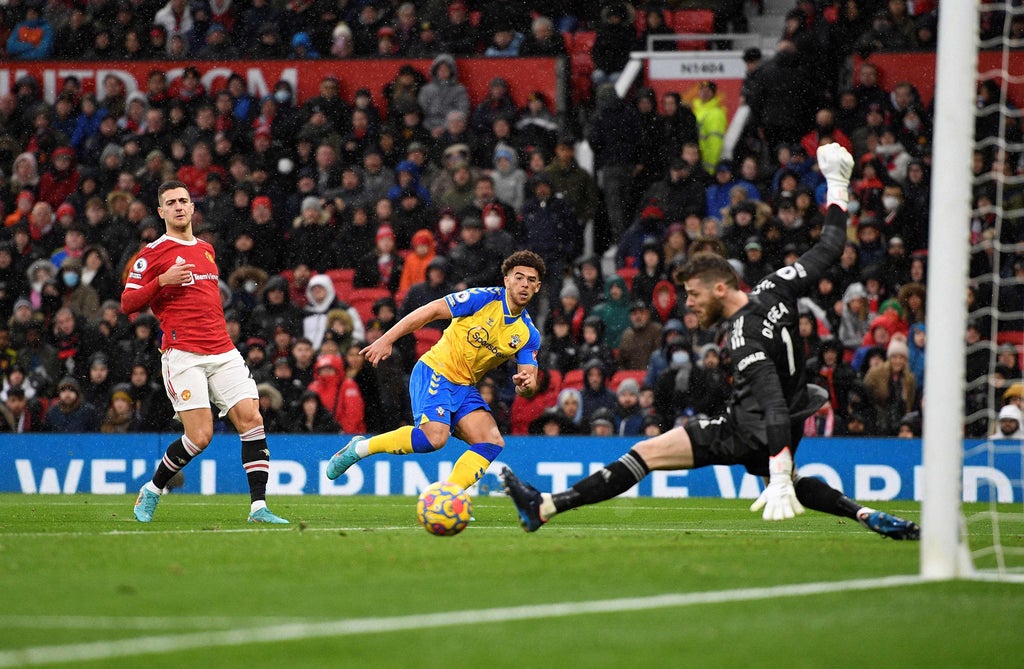 Play well, score first, play less well, concede. Manchester United’s third 1-1 draw in nine days followed the same pattern as the previous two, only with one significant difference: the sound of booing at the sound of the final whistle.

Old Trafford was not amused and had no reason to be after seeing Southampton come away with a well-deserved point, as many of the same problems that have plagued Ralf Rangnick’s side of late played out once more.

There was the bright start that supporters have come to expect, with their best player on the day – Jadon Sancho – finding a breakthrough, but as night follows day, United failed to maintain the same intensity leading up to Che Adams’ equaliser, then could not pick themselves up off the canvas in search of a winner.

At least Cristiano Ronaldo hung around a little longer after the final whistle than usual but for once, you could understand if he had wanted to make a sharp exit. As he goes about his personal battle with Father Time, it is worth remembering that Father Time is undefeated. The limits of having your line led by a 37-year-old were on full display.

United could have led through Ronaldo as early as the seventh minute, when he rounded visiting goalkeeper Fraser Forster after being slipped in by Sancho, yet here was the first piece of evidence that the five-time Ballon d’Or winner’s age is finally starting to tell.

His tame finish, struck with none of the power and authority we have come to expect, trickled towards the goal-line before being intercepted and cleared.

It would not be the last time that Ronaldo would look somewhat off-the-pace but his team-mates were anything but, in those opening exchanges at least. The breakthrough eventually arrived by way of a rapier-like counter attack that perfectly broke and exposed Southampton’s pressing game.

After United bravely played out of the back under pressure, Bruno Fernandes was offered the time and space to release Marcus Rashford on the right, as Mohammed Salisu failed to intercept the through ball down the line. United were in and, after a quick glance towards the far post, Rashford sent in a low cross for Sancho to convert at point-blank range.

The goal was the culmination of a bright, energetic start by United but heralded a slow, gradual decay. Southampton grew into proceedings towards the close of the first half, with their clearest sight of goal falling to Stuart Armstrong. His clipped finish at full stretch after latching onto a long throw was easily held by David de Gea.

It should have been a warning shot and inspired renewed focus at the start of the second half, though like at Turf Moor in midweek, United’s lead was almost immediately wiped out. The finish by Adams was sublime, hit across a helpless De Gea to rebound off the far post, hit the other and trickle over the line, but that did not mean the goal was not preventable.

Southampton went from one end of the pitch to the other, escaping Ronaldo’s laissez-faire attempts at pressing and marauding through the gaps between United’s lines at ease. Adams might have been flagged offside if United’s defense had been properly organized rather than in dog-leg formation. As it was, Luke Shaw played him on.

United went in search of a winner but, as one prominent former right-back pointed out on Twitter, did just about everything you are not supposed to do when chasing a game.

There were loose passes, cheap fouls and petty squabbles with opponents and officials all over the pitch, chipping away at their time to find a second. Ronaldo believed he had restored the lead, heading in a Fernandes free-kick at close range, though it was clearly offside from Sancho’s flick-on.

This would instead be another game without a goal for the Portuguese, who has still only scored once in open play since Rangnick’s appointment, though his form is far from the only problem.

Just as Harry Maguire could have won this game in the third minute of stoppage time, with a header brilliantly saved by Fraser, he may have lost it a few minutes earlier with a challenge on Armando Broja that, on another day, may have resulted in to Southampton penalty.

It was typical of United’s erratic performance, the third such performance in a little over a week, but at least the results are consistent: 1-1, 1-1, 1-1.